Israel Is There an End in Sight?
Israel 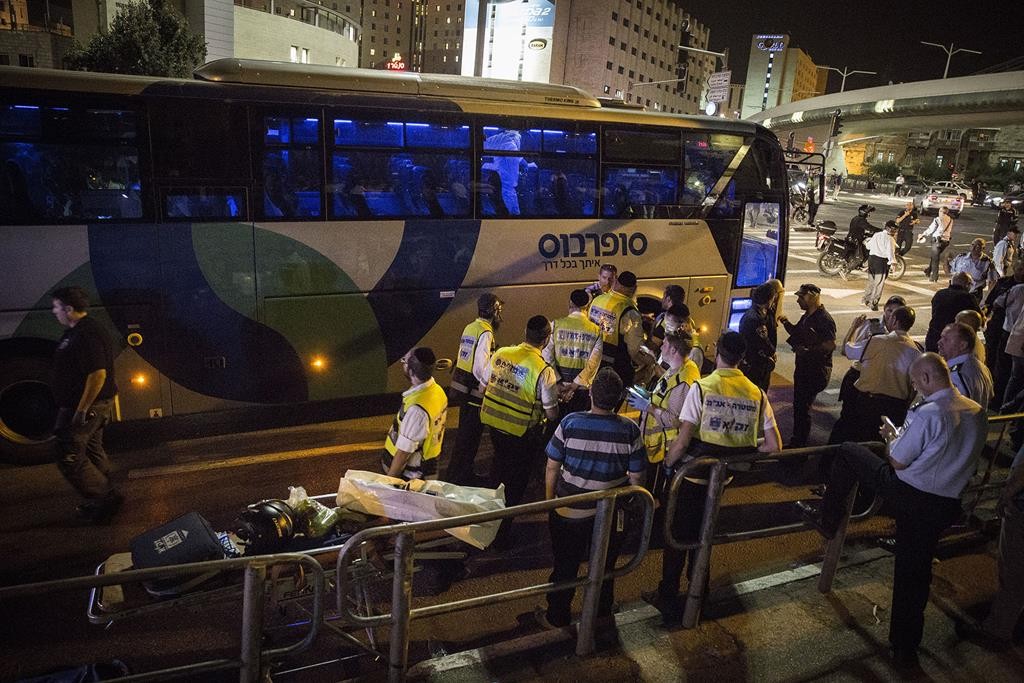 The wave of stabbing attacks against Israelis by Palestinian terrorists  continued for yet another day on Monday.

Following a knife attack by Palestinian terrorists on Monday afternoon in the Pisgat Zeev neighborhood of Yerushalayim, a 13-year-old boy was in critical condition, fighting for his life.

The attack began when two terrorists stabbed a Jewish man, seriously wounding him, then continued along the street, looking for more targets. They set upon a Jewish boy riding a bike and stabbed him, wounding him critically.
A bystander who witnessed the attacks then gave chase.

“Suddenly, I heard shouting,” the bystander told reporters afterwards. “It took me a second, then I ran toward them. After I saw the teenager with a stab wound, then I ran — I ran after them. They were frightened and started running away.”

“I ran after the big one. I got to the stairs, and suddenly I hear my cousin shouting behind me, ‘the other one’s behind you!’”

He then found himself face-to-face with the knife-wielding Palestinian teenager, while all he had was a stick.

“I threw the stick at his head to hurt him; I missed,” he continued. “He started running with his knife again along the road.

“I saw a Mazda drive past me. I signaled to it to go to the right. It hit the attacker a little and sent the knife flying — and then I neutralized him.”

The other terrorist was spotted by two border police officers on patrol, whom they called upon to stop. When he refused, they opened fire and apprehended him.

Police identified the terrorists as brothers Ahmad and Mahmad Mansour, aged 13 and 15, from the city’s Arab neighborhood of Beit Hanina. ​

Only about an hour before that, an 18-year-old female terrorist stabbed a border policeman in the capital’s Ammunition Hill area, wounding him lightly. The assailant was shot and overcome by officers, who rushed out from the nearby headquarters of Israel Police.

During the morning, a Palestinian terrorist was shot and killed near Lion’s Gate, in the Arab Quarter of the Old City, after he tried to stab a Border Police officer.
Police said that the terrorist pulled out a knife after being stopped on suspicion. He then charged one of the officers, stabbing him in his metal breastplate. Police opened fire, killing the man, later identified as 18-year-old Mustafa Hatib, of the east Yerushalayim neighborhood of Jabel Mukaber.

On Monday night, a man was stabbed and wounded on the 185 Superbus bus at the entrance to Yerushalayim under the Chords Bridge during an attempt to steal a soldier’s rifle.

According to an initial police report, when the attacker failed in his grab for the rifle, he then tried to choke the soldier, took out a knife and wounded him with it.

While the bus had come to a halt near the International Convention Center, a civilian struggled with the terrorist until police boarded the bus. The terrorist seized a gun from one policeman, but was then shot dead by another.

Magen David Adom (MDA) and United Hatzalah medics treated two people at the scene who suffered from light injuries. “I was on my way home teaching a First Aid course, driving behind a mobile police unit,” MDA medic Yair Bir said. “I saw the cops leave and run toward a nearby bus, so I immediately took a first aid kid with me.”

“When police officers entered the bus to neutralize the terrorist, I went to the young man of about 20 who had suffered a stab wound in the face, bandaged him and gave him first-aid treatment,” he said. “Only minutes later an MDA ambulance arrived to take him to the hospital.” He was later reported to have arrived at the hospital with light to moderate wounds.

A second man was treated for shock and also evacuated to hospital.

In another incident on Monday, a group of Gazan rioters tore at the security fence and breached the border with Israel. IDF units at the scene forced them back into Gaza using tear gas, an army spokeswoman said.

Meanwhile, Ala Raed Zyud, 22, the resident of Umm al-Fahm who rammed his car into a bus stop and then stabbed several people near Hadera on Sunday, claimed in court that it was an accident, not a terrorist attack. Zyud told interrogators that he lost control of the vehicle.

Appearing in a Haifa court, he smiled, and said, “I didn’t do anything. They want to turn me into a terrorist. I don’t know what they want from me. I’m not a terrorist.”

The soldier whom Zyud drove into was transferred from the Hillel Yaffe Hospital in Hadera to Sheba Hospital in Tel Hashomer on Sunday night. She continues to be in serious condition.

“The soldier underwent several surgeries. Her life is in danger and we hope that our efforts will bear fruit,” said Dr. Yoram Klein, director of the hospital’s trauma ward.