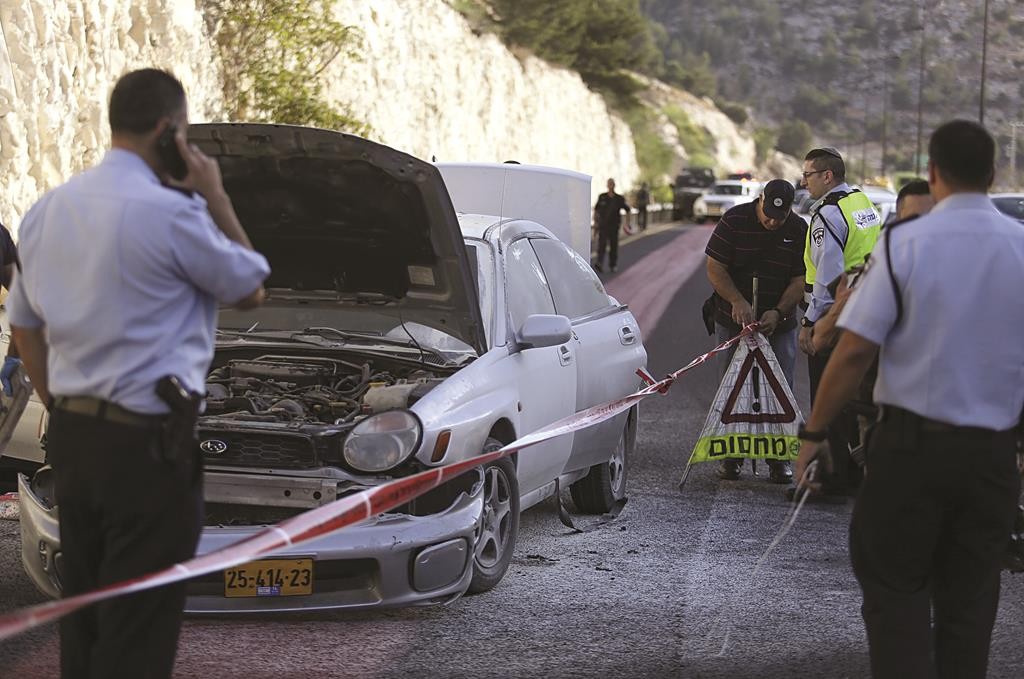 The Palestinian terror campaign veered northward on Sunday night as four Israelis were wounded in an attack on Route 65 near Kibbutz Gan Shmuel, the location of a large shopping center outside Hadera.

A 20-year-old Israeli Arab from Umm el Fahm ran his car into one person waiting at a bus stop, then left the vehicle and stabbed the others, according to an initial police report. The assailant was apprehended.

Paramedic Khaled Mora’i and emergency medical technician Yehuda Haim arrived at the scene to treat the victims. “When we got to the scene, we saw in a ditch on the side of the road an unconscious 19-year-old woman who had suffered a multi-systemic injury. We gave her life-saving medical treatment that included CPR, treating wounds and giving liquids and quickly transported her to the hospital.”

It was the latest incident, as of this writing, in a 12-day nationwide rampage which has so far killed four Israelis and injured numerous others.

Twenty-three Palestinians were killed in clashes with security forces, and hundreds more injured.

Earlier on Sunday, in an apparent suicide bombing, a woman detonated a propane gast tank and lightly wounded a police officer near the A-Zaim checkpoint on the road between Ma’aleh Adumim and Yerushalayim.

The female terrorist had several such tanks in her trunk. B’chasdei Hashem,  she only had time to detonate one.

A police officer, Moshe Chen, 45, suffered burns to his upper body, but b’chasdei Shamayim, was evacuated to the hospital with light injuries and listed in stable condition.

The terrorist, who was wounded more seriously, was identified by police as a 31-year-old resident of eastern Yerushalayim.

“I am on the road in the direction of the A-Zaim junction from the Adumim junction. The woman drove alone in the public transportation lane. I saw her acting suspiciously, she yelled ‘Al-ahu akbar’ (‘G-d is great’), seemed like she has set off a device. I am lightly wounded, the terrorist is on the ground, the car is burnt, is going to burn, someone there put out the fire with a fire extinguisher.”

“I don’t know if I am lightly wounded, I am in shock, I have suffered some burns,” Chen continued. “The device went off, she detonated the device.”

“The explosion occurred right away and I asked people in the area to stay away because there was a terrorist. I saw people coming toward me to offer help.”

Chen said he told armed bystanders to hold their fire and not to shoot the terrorist.

“Some of them had weapons and I told them not to shoot at the woman, who at this point was not on fire and who was wounded and who did not pose a danger. I called for more police and security forces to come to the scene.”

A 13-year-old Palestinian from Jalazoun, near Ramallah, was shot dead during rioting against Israeli security forces in the vicinity of the Beit El checkpoint.

Over Friday and Shabbos, Arab terrorists wounded 10 civilians and four police officers in Yerushalayim and Yehudah and Shomron in eight separate attacks. Police shot and killed two of the attackers in the capital.

Another Arab man, 25, who was wounded after he shot at border policemen during a riot on Friday in the Shuafat refugee camp in northeastern Yerushalayim, died the next day.

In the first incident on Shabbos, shortly before 11 a.m., an Arab teenager stabbed two mispallelim on the way back from davening at the Kosel. Both men, in their 60’s, were attacked about 150 yards from Damascus Gate, leaving them moderately and lightly wounded, respectively, police spokesman Micky Rosenfeld said.

The teenager then charged Border Police officers, who shot him dead.

That touched off a riot in the Old City, as a mob rushed police, who used non-lethal means, including stun grenades and rubber bullets, to disperse them.

In the second attack in the capital, at approximately 3 p.m., a 19-year-old Palestinian from Shuafat stabbed two officers from the police’s Special Patrol Unit near Damascus Gate. Police then opened fire and killed him,.

“Three people are currently being hospitalized in the intensive care unit,” Dr. Merin said. “The person in most critical condition is the police officer who arrived yesterday with a deep wound to his chest and damaged blood vessels.”

“He arrived in critical condition,” Dr. Merin continued, “and was in need of blood. His condition has stabilized, but unfortunately he is still in mortal danger. His condition is very serious and we fear he may succumb to his wounds in this event.”