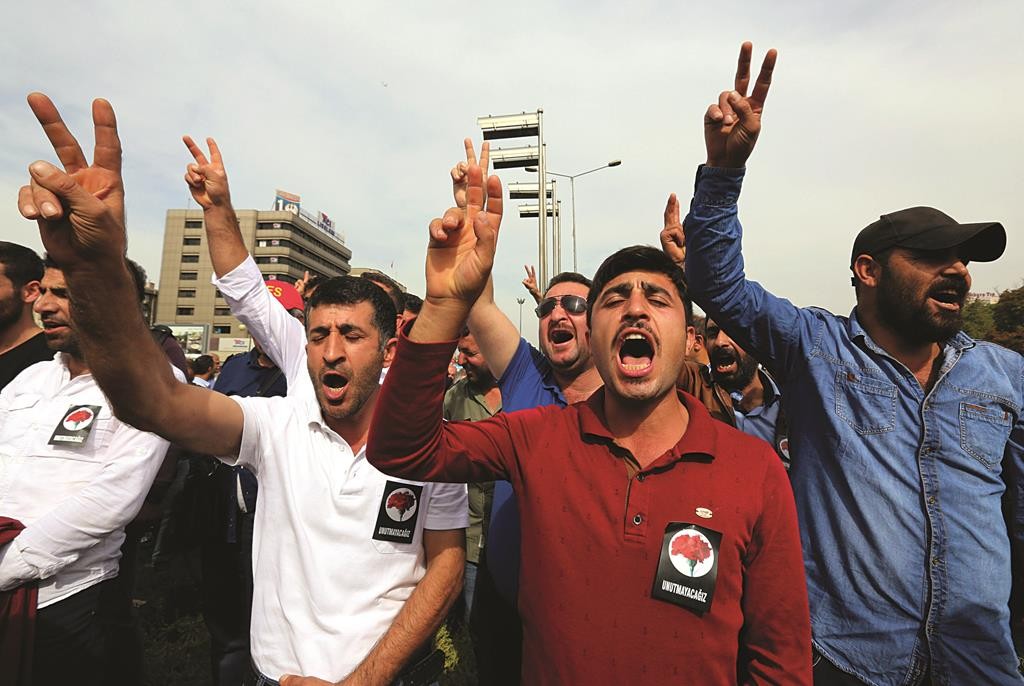 Thousands mourned the 95 victims of Turkey’s deadliest attack in years as state inspectors tried Sunday to identify who sent suicide bombers to a rally promoting peace with the country’s Kurdish rebels.

No one has claimed responsibility, but the attack, which happened on Saturday, bears similarities to a suicide bombing the government blames on the Islamic State group, which killed 33 Turkish and Kurdish peace activists near a town bordering Syria in July. Police detained 14 suspected Islamic State members Sunday in the central Turkish city of Konya, but it wasn’t clear if they were related.

On Sunday, police fired tear gas and scuffled with the mourners — some chanting “Murderer Erdogan!” — who tried to reach the blast site to lay carnations. A group of about 70 was eventually allowed to enter the cordoned off area.

More than 10,000 also gathered in Turkey’s mostly Kurdish southeastern city of Diyarbakir, holding a moment of silence for the victims, including hundreds of wounded.

Erdogan is hoping the ruling party regains its political majority, and critics accuse him of intensifying attacks on Kurds to rally nationalist votes. They worry the bombings could entice rogue Kurdish forces to attack, persuading Turks to seek security over peace.

The Islamic State group, which is fighting Syrian Kurdish forces allied to Turkey’s Kurdish rebels, could benefit the most from this, since a continued military offensive within Turkey would take pressure off the terrorist group in Syria.

The Syrian government also has an interest in destabilizing Turkey, which has made no secret of its desire to see President Bashar Assad ousted.

Regardless of who may have planned the attack, it showed how deeply Turkey is being drawn into the chaos in Syria, with which it shares a 900 km-long border.

Turkey already hosts some 2.2 million refugees from Syria – more than any other nation — and extremists use Turkish territory to enter or exit the fray, increasing the threat of violence.