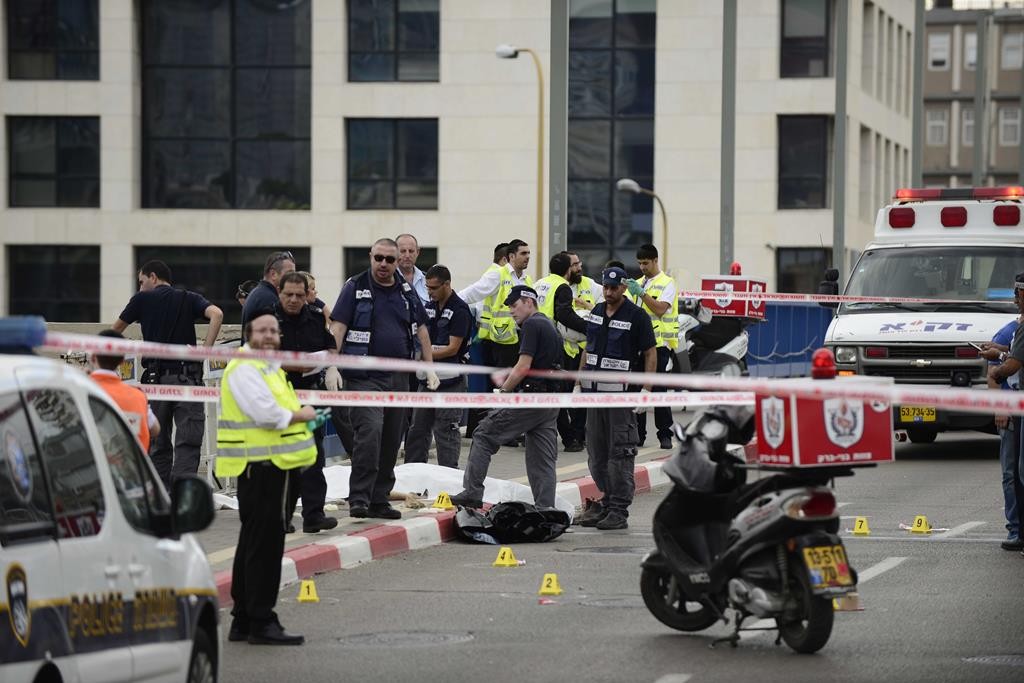 Shortly after night fell on another long day of Palestinian terror attacks, Israeli Prime Minister Binyamin Netanyahu told the nation at a press conference that the violence was result of incitement by Hamas, the Islamic Movement in Israel, and the Palestinian Authority.

During the course of the day, seven Israelis were wounded in four separate stabbing incidents, in Yerushalayim, Tel Aviv, Kiryat Arba and Afula.

“We will take aggressive steps against the Islamic Movement and other inciters,” he promised, and asserted that Israel would prevail despite the difficulties.

Erdan noted that over half of the hundreds of stone throwers arrested in the past few days were minors, misled by the incitement.

Yaalon and Eisenkot confirmed that the IDF has been given free rein to respond to the violence as it deems necessary, and has not had its hands tied, as some have claimed.

Yet, there was no sign of a letup on Thursday. Just after 12 noon, a 25-year-old yeshivah student was seriously wounded and another man lightly injured in a stabbing at the Yerushalayim light rail station in front of national police headquarters near Ammunition Hill.

Magen David Adom teams arrived at Haim Bar Lev Road to provide emergency first aid and brought him to Shaare Zedek Medical Center in the capital, where he underwent surgery.

The hospital reported that the student arrived in critical condition, was subsequently sedated, and is breathing through a respirator.

19-year-old Tzuvhi Ibrahim Mahmad Abu Halifa from Shuafat in eastern Yerushalayim was named as the assailant. He approached the light rail station, stabbed the chareidi student in the neck  with a knife,  and fled.

Shmulik Avaraham, the coordinator of United Hatzalah’s emergency and security services, described the moments after the attack.

“When I arrived in the area, I came across a young chareidi yeshivah student who had been stabbed in the upper body near the light rail station. Together with other volunteers from United Hatzalah’s motorcycle unit, we gave him medical [care] before he was taken to the hospital.”

“Large police forces were acting in the area and prevented the attacker from stabbing other citizens. It’s a great miracle, there were no casualties in the event,” he added.

Light rail service was temporarily suspended between Ammunition Hill and Damascus Gate until the area was declared secure.

Then, at about 3 p.m., news came of another stabbing, this time near the Kiriya, IDF Headquarters in central Tel Aviv on the corner of Moses Street and Menahem Begin Boulevard.

MDA paramedics reported that four people including the soldier were lightly wounded and taken to nearby Sourasky Medical Center for treatment. The victims included three women and a man — two women in their sixties and twenties, and a man and woman in their forties. All suffered cuts to their upper bodies, but remained conscious throughout.

The terrorist then ran toward the nearby Azrieli shopping mall. A soldier who was on the scene ran after him, shot and killed him, before he could harm anyone else.

Pictures of the screwdriver used in the attack ran on Israeli media.

In Kiryat Arba, a 25-year-old Jewish man was badly hurt in a knifing at the western entrance of the town, which fronts the predominantly Arab city of Chevron. The attacker escaped, and a manhunt was launched to apprehend him.

By early evening there was word of a fourth attack, in which two people were stabbed in the northern city of Afula. A 20-year-old man was moderately wounded from stab wounds to his upper body.

Yossi Fahima, director of the MDA in Afula, told Ynet that he had been stabbed in the chest twice and was in moderate condition. “He was conscious when he was evacuated,” said Fahima. “The terrorist was not wounded, other than blows he received from civilians, and was rescued [by police] from the angry mob.”

Also on Thursday afternoon, a 20-year-old Palestinian was killed when residents of Shuafat attempted to prevent security forces from entering the area to search the home of Wassim Jamal Furej, perpetrator of the morning’s attack in Yerushalayim.