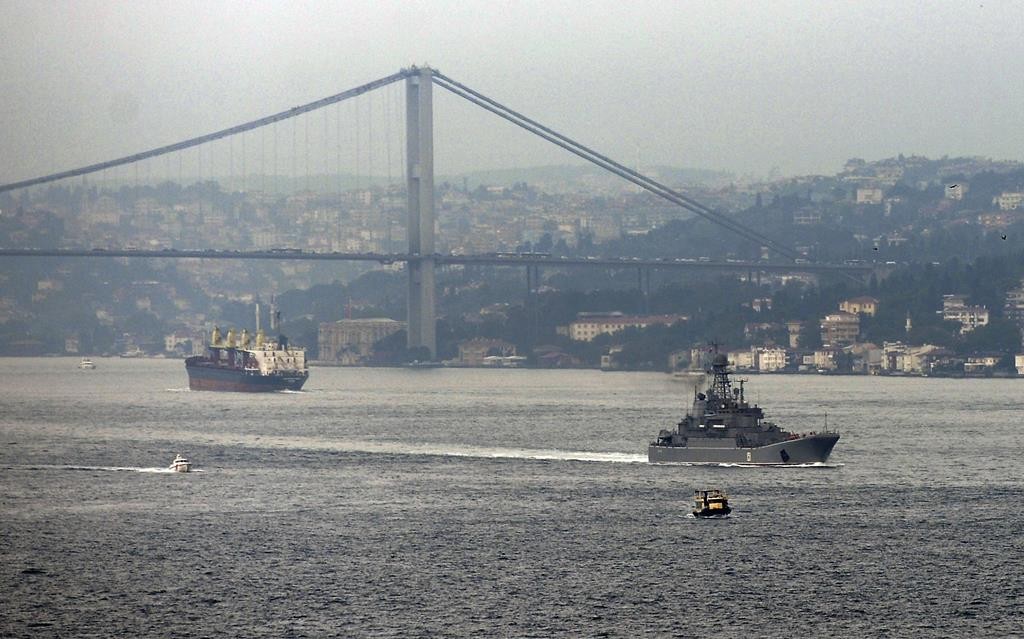 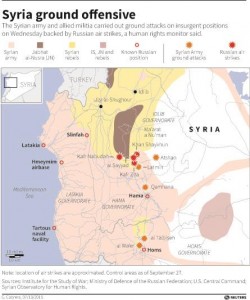 The missiles flew nearly 1,000 miles over Iran and Iraq and struck Raqqa and Aleppo provinces in the north and Idlib province in the northwest, Russian officials said. The Islamic State group has strongholds in Raqqa and Aleppo, while the al-Qaida-linked Nusra Front has a strong presence in Idlib.

U.S. Defense Secretary Ash Carter said Russia was continuing to strike targets other than Islamic State, adding that he was concerned about the Syrian ground offensive backed by Moscow’s airpower.

The latest developments came a week after Russia began airstrikes in Syria, its longtime ally, on Sept. 30, and added a new dimension to the complex war that has torn apart the Mideast country since 2011.

Activists and rebels say the targets have included Western-backed fighters and other groups opposed to President Bashar Assad.

A Syrian official and activists said government troops pushed into areas in the central province of Hama and south of Idlib in the boldest multipronged attack on rebel-held areas, benefiting from the Russian air cover. The official spoke on condition of anonymity because he was not authorized to talk to the media.

Moscow has mainly targeted central and northwestern Syria, strategic regions that are the gateway to Assad’s strongholds in Damascus, and along the Mediterranean coast where Russia has a naval base.

The Russian airstrikes strikes appear to have emboldened Syrian troops to launch the ground push after a series of setbacks in northwestern Syria in recent months.

The Islamic State group is not present in the areas where the ground fighting is underway.

The offensive in central Syria and the ensuing clashes with terrorists groups, including the Nusra Front, was the first major ground fighting since the Russian campaign began.

Appearing on broadcast media with President Vladimir Putin, Russian Defense Minister Sergei Shoigu said 26 missile strikes were conducted from four warships in the Caspian. Shoigu insisted the operation destroyed all the targets and did not launch any strikes on civilian areas.

“The fact that we launched precision weapons from the Caspian Sea to the distance of about 1,500 kilometers and hit all the designated targets shows good work by military industrial plants and good skills of personnel,” Putin said.

Andrei Kartapolov of the Russian General Staff told Russian news agencies the strikes were planned so that the cruise missiles would fly “over unpopulated areas.” Shoigu also said Russia has carried out 112 airstrikes on IS positions since Sept. 30.

“The Russian military operation in support of the Syrian army continued at new higher technological level,” said Putin’s spokesman Dmitry Peskov, adding that the Syrian army began an offensive “with our fire support.”

The Britain-based Syrian Observatory for Human Rights said a government offensive began early Wednesday on four fronts in Idlib and neighboring Hama provinces in what the group’s director Rami Abdurrahman called “the most intense fighting in months.”

In Syria, the leader of a U.S.-backed rebel group Tajammu Alezzah confirmed the ground offensive in a text message to The Associated Press, saying Russian and Iranian soldiers were involved in the operation.

Russian officials deny sending any ground troops to the battlefield. Iran has been bolstering Assad by sending weapons and advisers, and helping arrange the deployment of Shiite fighters from Iraq and Hizbullah, as well as sending financial aid.

Last month, an intelligence sharing center was set up in Baghdad by Russia, Iraq, Iran and Syria to coordinate efforts to combat the Islamic State group.

Meanwhile, at a news conference in Rome, Carter said the U.S.-led coalition that also is conducting airstrikes in Syria has not agreed to cooperate with Russia in the fight against the Islamic State, and no collaboration is possible as long as Moscow continues to hit other targets.

He said the U.S. will conduct basic, technical talks with Russia about efforts to ensure that flights over Syria are conducted safely and, “That’s it.”

Washington is not prepared to cooperate with Russia’s strategy that is “tragically flawed,” he said.

“They continue to hit targets that are not ISIL,” Carter said, using an acronym for the Islamic State group. “We believe that is a fundamental mistake.”

Since September 2014, the coalition has been hitting Islamic State positions mostly in northern and eastern parts of Syria, as well as in Iraq. U.S. aircraft are still flying missions daily over Syria, the Pentagon said.

Russia’s entry into the crowded and sometimes uncoordinated air wars in Syria is making the U.S. increasingly nervous, reflecting concern at the Pentagon and in Europe about the risk of accidents or unintended conflict.

At least one U.S. military aircraft changed its route over Syria recently to avoid coming dangerously close to Russian warplanes, said Navy Capt. Jeff Davis, a Pentagon spokesman. He could not provide details, including how many times this has happened.

In Turkey, Prime Minister Ahmet Davutoglu renewed criticism of Russia, insisting the airstrikes were mainly targeting the moderate Syrian opposition and thus helping strengthen IS. He urged Moscow to respect Turkey’s airspace, saying the country would not “make any concessions” on its border security.