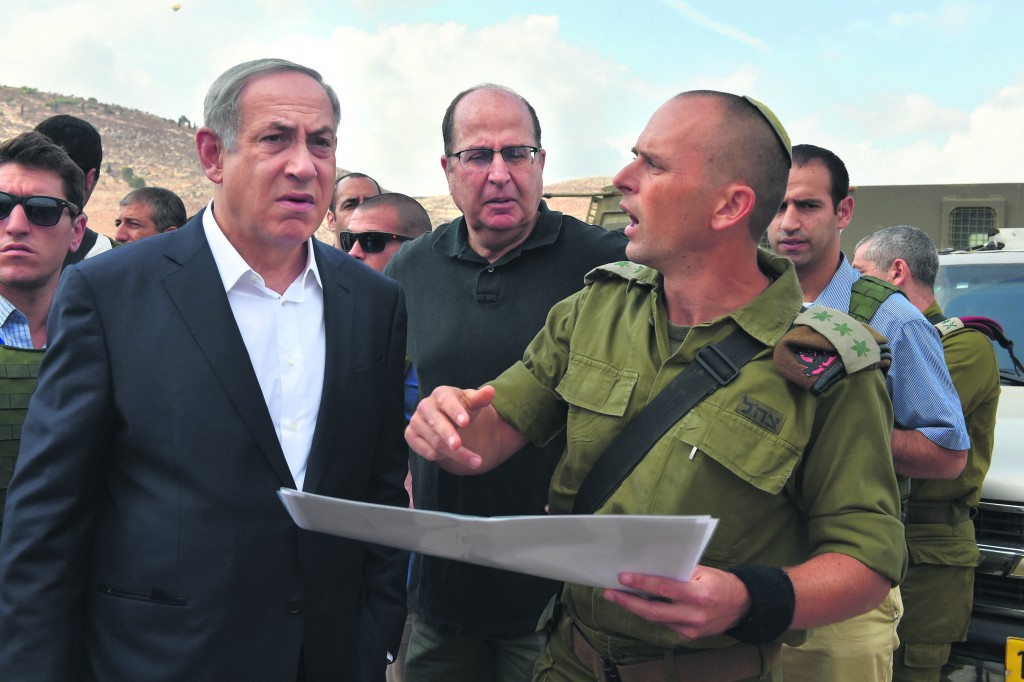 His statement came on the heels of a dramatic surge in terrorism that saw the murder last Thursday night of Eitam and Naama Henkin, Hy”d, near Itamar, in front of their four young children; and of Rabbi Nechemia Lavi and Rabbi Aharon Banita (Bennett), Hy”d, in the Old City of Yerushalayim on Motzoei Shabbos.

“We decided today to enact a major plan to employ cameras at all junctions in the West Bank, both on the ground and in the air, with connections to operations rooms,” Netanyahu told reporters at the end of a tour of the Shomron that included a visit to the scene of the terrorist attack near Itamar where the Henkins were murdered. “This is an important element of restoring security and foiling terror attacks.”

Netanyahu’s statement referred to criticism from certain circles, including ministers of his own government, that he was not allowing the army to do what is necessary to vanquish terror. “There is no question here regarding our support for the military, and everyone knows the truth, in contrast to those who claim otherwise,” he said. “There is a certain level of responsibility required from the settlers, and they should be accurate in their claims.”

The prime minister said he had also directed security forces to “deal with” vendors who were in the area when Adele Lavi was stabbed on Motzoei Shabbos, Yediot Aharonot reported. After the terror attack that killed her husband and wounded her and their infant son, Adele said she had cried for help after being stabbed, but people refused to help her and even mocked her. “I asked that their stores be shuttered and that they be brought to justice,” Netanyahu said in response to these allegations.

“The greatest center of incitement in recent years is the Islamic Movement, and we will take care of them, too,” continued the prime minister. “We will break this wave of terror like we broke previous waves of terror. We are in ongoing contact with all our neighbors and are trying to make the facts clear despite the wave of falsehoods that have been disseminated. We have no intention of changing the status quo at the Temple Mount and have no intention of destroying mosques or building a Third Temple there.

“We have ongoing contact with the Egyptians, the Jordanians and many others,” he continued. “I am not willing to tolerate Israeli citizens joining in the incitement. I cannot tolerate spitting on police or waving PLO and Hamas flags at stadiums — not by Jews and not by Muslims — and I have directed the attorney general to act against the agitators among us.”

“I recommend that local council heads stop hyperventilating,” he said. “There’s a difference between the situation during Operation Defensive Shield [the 2002 military operation in Yehudah and Shomron during the second intifada] and that of today and, since then, the IDF has been on the offensive in the West Bank. These statements [that the government isn’t doing enough] cause citizens to take the law into their own hands. This is an unacceptable phenomenon, which sabotages our struggle against Jewish terror and adds fuel to the fire. Ministers must remember that the government has collective responsibility.”

Yaalon’s warning was likely directed at several politicians who have been criticizing the government, including Yisrael Beiteinu chairman Avigdor Lieberman. “He keeps repeating the same mantras and declarations,” Lieberman told a Ynet panel. “The only thing that has changed is the pitch of his voice.

“This is a government of weaklings which doesn’t make real decisions. We need to terminate the terror leadership in Gaza.”

Opposition chairman Yitzchak Herzog, head of the Zionist Union party, echoed Lieberman’s sentiment, saying, “Think about it. What would Netanyahu do to me if I were prime minister?”

Lieberman termed Netanyahu’s declarations “cosmetic,” and placed the responsibility for the current wave of terror squarely on Hamas’ shoulders. “We haven’t touched the command structure in Gaza. It is seemingly immune. There is no alternative to decimating the terror leadership in Gaza,” he said.

“The chances that my party will join the current government are nonexistent,” he added. “We support and call for elections as soon as possible. The government has failed in its fight against terror, and the problems facing Israel’s economy. It’s clear to me that elections will be held in 2016.”

Dagan said that the Cabinet’s decisions were a step in the right direction, but not enough. “I respect the prime minister,” he told the Ynet panel. “He is under international pressure, but what we have here is a case of succumbing to international guidelines, and a failure to act within the government.”

Dagan continued to say that the government “is satisfied with quick fixes in place of institutional change. I expected to receive a call from the government secretary promoting the establishment of a settlement on the road where the murders took place, in the wake of last week’s terrorist attack [that killed the Henkins]. Even if the prime minister doesn’t want to allow the building of new communities, Itamar has had an expansion plan in place for years.”

Dagan added that “the current method has not changed. The prime minister doesn’t want change. The roads are abandoned and the army jeeps continue to get pelted. I refuse to leave this plastic chair in front of the Prime Minister’s Residence until this changes.”

Minister Yariv Levin (Likud), who was present at a protest rally on Monday night organized by the Shomron Regional Council outside the Prime Minister’s Residence, said Tuesday morning: “When you hear the head of the opposition saying what he said, you realize that this government is the only option. The public present at the protest made no attempt to say the government must be replaced.”Levin attacked the legal system in Israel and called for change. “We are suffering from intolerable over-legislation in Israel,” he said. “Legal counsels have become decision makers instead of the government. This unacceptable situation contributes to terrorism.”