Israel All the Symptoms of an Intifada
Israel 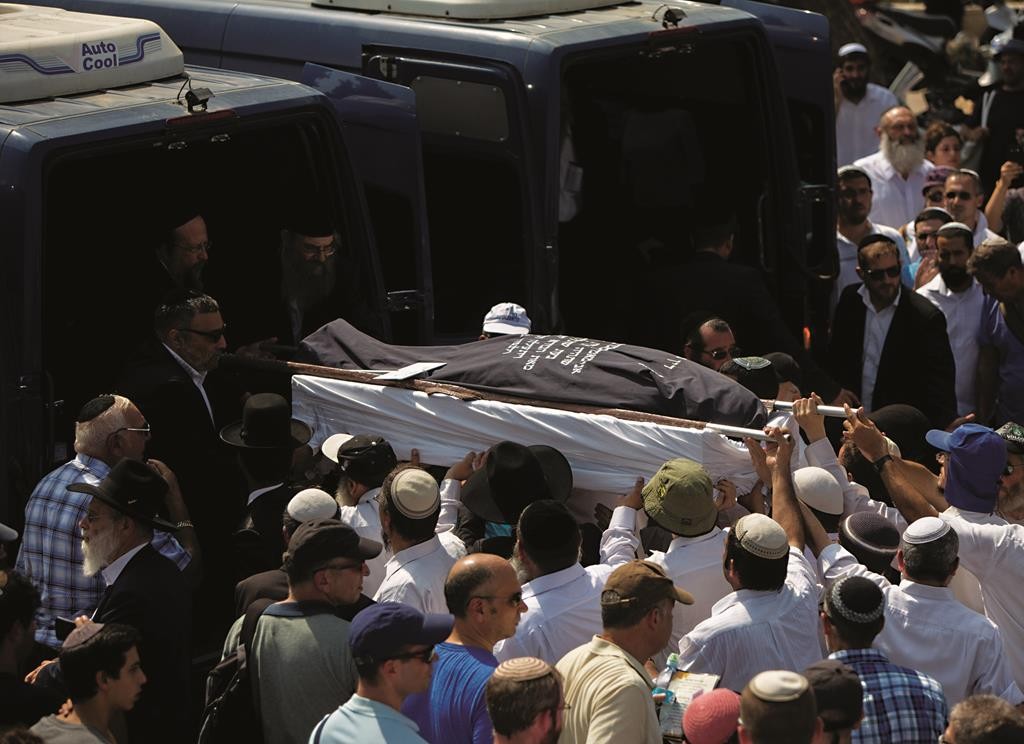 How did the Israeli security forces manage to capture the Hamas terror cell that murdered the Henkins, Hy”d, in less than 48 hours?

The terrorists were very well organized and had trained for months for last Thursday’s attack. They took up positions on the road near Itamar, in the Shomron, at a sharp curve in the road where drivers are forced to slow down. At that point, which was poorly lit, they fired from close range at the driver and his wife, Eitam and Naama Henkin, Hy”d.

The plan was to approach the car after it spun out of control and went off the side of the road and “verify” the kill. At that time, they would also check the back seat for more victims.

One of the terrorists ran ahead, and he was hit in the hand by a bullet that misfired from the gun of a second terrorist. He dropped the gun and collapsed in pain, bleeding. The commander of the terror operation, who wasn’t present but was monitoring the situation on an open phone line, called off the search of the car and ordered them to get the wounded terrorist to a medical clinic in Shechem.

The wounding of the terrorist was chasdei Shamayim on two counts. First, it spared the four young children in the back seat, aged 4 months to 9 years. Second, it led Israeli forces to the killers.

Investigators found the gun and a different blood type from the Jewish victims and understood that one of the terrorists had been wounded. This eventually led them to the hospital in Shechem, where undercover security forces dressed as Arabs entered the hospital and made the arrest.

The wounded terrorist led the forces to the rest of the cell.

Does the quick arrest of terrorists serve as a deterrent?

Yes. The shorter the time between a terror attack and the arrest, the more of a deterrent effect there is. In the end, the Arabs understand that Israel has good intelligence sources, knows what they’re up to and can get to them quickly.

What have we learned about the terrorists’ modus operandi? Are we seeing “more professional” terror operations that are better organized and funded?

Yes. This group operated very professionally, practicing for months by shooting at cars, which, b’chasdei Hashem didn’t result in deaths. They received their orders from Hamas-Gaza and funding from Hamas-Turkey.

What do you say to the claim that the Palestinian violence is a “popular” uprising that no one can control?

The truth is that there are a number of circles in the execution of Palestinian terror. It is all based on very intense incitement that is pushed by a number of elements, including the Palestinian Authority, Hamas and Islamic Jihad. The past two years has seen a dramatic rise in the incitement, particularly involving Har HaBayis.

Another development is that Israeli Arabs are helping to fund the incitement, in an attempt to turn the Israeli-Arab conflict into a religious war. This includes Arabs in Nazareth, Umm el-Fahm and Sakhnin. They collect money to fund many publications whose purpose is to incite the public, and their preachers stir up the street with their sermons.

So how fair is it for the Israeli government to demand of PA Chairman Mahmoud Abbas to do something about the incitement in his media outlets, mosques and schools, when he doesn’t control the incitement among Israeli Arabs?

That’s exactly the point that was raised in the Cabinet meeting this Sunday, where it was decided to take firm action against incitement. This includes banishing some of the leaders behind the incitement campaign.

This incitement is creating a mood on the Palestinian street that drives individuals to act “on their own” and stab someone, or throw a rock or Molotov cocktail.

In addition, we have the highly organized, well-trained terrorists who take their orders and funding from Hamas and other groups.

You’ve been saying for some time that the violence has “graduated” from sporadic outbursts to a full-fledged intifada. Have the devastating terror attacks of Chol Hamoed done anything to change the mind of the security establishment?

A senior military source put it to me this way: “We’re definitely seeing a surge in violence and a negative dynamic. The Palestinians are openly confronting soldiers in a way they never dared do in the past. But we’re not talking about thousands of them, rather hundreds. There is a significant increase in the number of incidents — the throwing of rocks and Molotov cocktails — but we’re not seeing the Palestinians out in the streets in massive numbers.”

Whether you call it an intifada or “disturbances,” the situation cannot continue this way. It’s clear to the country’s political and military leadership, who have held urgent consultations in recent days, that we are on the eve of a major military operation.

Does that mean something on the scale of Operation Defensive Shield, which followed the 2002 Park Hotel massacre, and which saw the IDF destroy the terror infrastructure in Yehudah and Shomron?

It all depends on what happens in the next few days. The security forces tend to attribute the recent surge in violence to the chagim and to increased attempts by Jews to ascend Har HaBayis. They say that the chagim are always a “hot” period for terrorism. If, chalilah, the terrorism continues for the next week or so, when there is no chagim excuse, I think we’ll see a willingness to concede that this is an intifada and that a major military operation is needed to prevent it from escalating out of control.

For now, the IDF is making do with the deployment of four additional brigades in Yehudah and Shomron. These soldiers have definitely helped prevent attacks. We’re also seeing a stronger hand being employed by the security forces, with more arrests, more home demolitions and more widespread use of gunfire by forces that come under attack.

As far as Har HaBayis, the government can’t target Jews — who are halachically not allowed to go there — for political reasons, so it has announced that it is restricting admission to the site to all groups, Muslims, Christians and Jews. It is hoped that this will calm things down.

What is the attitude in Israel toward PA Chairman Mahmoud Abbas? He’s spreading lies about Israel seeking to take over Har HaBayis, appealing directly to the international community, over Netanyahu’s head, and couldn’t even muster a condemnation of the murders that took place over Sukkos.
Can he be counted on to continue security cooperation with Israel?

Abbas understands that a third intifada would be the end of him politically. That’s because Israel would have no choice but to push him aside and deal directly, and forcefully, against the terror infrastructure in the PA-controlled areas, making Abbas irrelevant.

Obviously, Israel isn’t happy about Abbas’ incitement, his lies about Israel trying to undermine the status quo on Har HaBayis, and all the rest. But when it comes to his failure to clamp down on terrorism, there is an understanding that Abbas no longer exercises the same degree of control over the Palestinian street that he once enjoyed. He has competition from Hamas, which is a major threat to him.

Moreover, he even has difficulty controlling his own security forces, who have been cooperating with Israel. The problem is that many officers are no longer heeding his orders out of fear that tomorrow the PA will be taken over by Hamas and they will be tried as traitors.

As far as failing to condemn the recent terrorist murders, Israel is upset, but there isn’t much to do. That’s Abbas. He’s an actor who plays to different audiences. For all his faults, he’s all Israel has to work with.

A brother of Eitam Henkin, Hy”d, pointed out that Israel builds bypass roads, but then allows the Palestinians to use them. Doesn’t that defeat the purpose?

Yes. Another of the measures discussed this week was separating Israeli and Palestinian traffic on these roads.

Bottom line, the situation is complex. Security forces see Har HaBayis as the focus of friction, and are also seeing increased tension surrounded Kever Rochel, where there’s been a dramatic rise in the number of stones and Molotov cocktails thrown and where soldiers stationed there are in real danger.

Adding to the complexity is a phenomenon of recent days in which Jews are throwing stones at Palestinian cars. So far, no one has been killed, but many have been injured.

The IDF is reporting that some of these Israelis, young people who defy their own communities, are stopping Palestinian cars and beating their drivers. This creates more pressure for the government, which has to divert soldiers to deal with these youths who could have been used to fight terror.