Trump May Have Passed His Peak, Polls Indicate 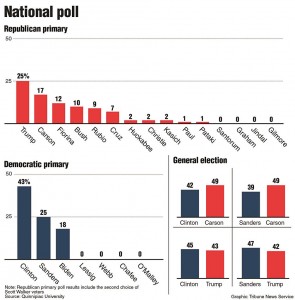 There’s almost nothing Donald Trump likes to talk about more than his steady rise in polls.

He may have to find a new topic.

A series of polls conducted since last week’s Republican debate at the Reagan Library continue to show Trump leading the pack. But they also show a plateau, or perhaps a small decline.

The evidence for at least a plateau is strong. Polls by Fox News, Bloomberg and CNN, all released in the last several days, have shown Trump stuck in place with about one-quarter of the GOP vote.

A fourth poll, by Quinnipiac University, showed a small decline, from 28 percent in August to 25 percent now.

Separately, a new poll in New Hampshire, which holds the first primary of the contest, showed a similar pattern: Trump is atop the field with 26 percent in the survey by the University of New Hampshire, which was released Thursday. That’s almost identical to his 24 percent in a poll the university conducted in July. The poll’s margin of error is plus or minus 5.3 percentage points.

Carly Fiorina, who has gained support nationally since the debate, also gained in New Hampshire and was in second place at 16 percent. Sen. Marco Rubio of Florida, retired neurosurgeon Ben Carson, Gov. John Kasich of Ohio, and former Gov. Jeb Bush of Florida were all closely bunched together in the next four spots.

Trump’s support from roughly 1 in 4 primary voters is nothing to dismiss, of course. In a multicandidate field, that much backing could win a lot of primaries. But if that proves to be a ceiling on Trump’s support, his long-term prospects would dim as other candidates dropped out.

Moreover, a plateau, let alone a sustained decline, could pose a particular problem for the real estate billionaire. Not only are polls a favorite topic of Trump’s, they’ve also been a big part of the generally positive coverage his campaign has received.

This article appeared in print on page 3 of the September 25th, 2015 edition of Hamodia.