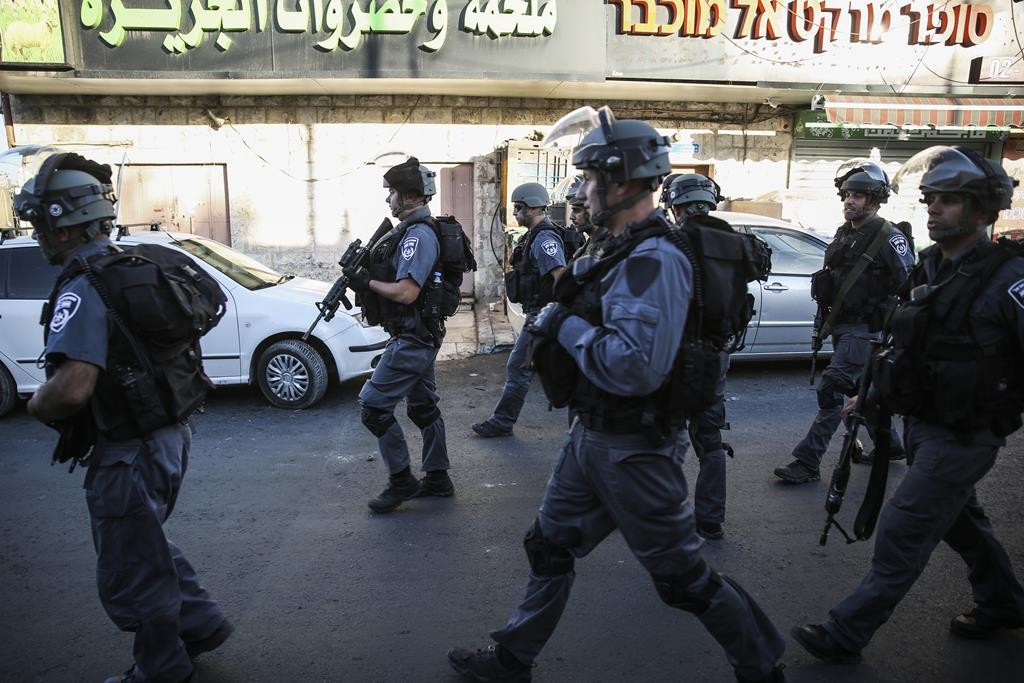 While Israel sought to formulate a crackdown on Palestinian rioters, the violence escalated over the weekend in Yerushalayim and elsewhere, resulting in the injury of several policemen and Palestinians.

Prime Minister Binyamin Netanyahu told the cabinet meeting on Sunday that contrary to Palestinian allegations, Israeli provocations were not the cause of the disturbances, but rather the Palestinians and their allies, who have been upsetting the status quo at Har HaBayis.

“We are not the ones changing the status quo. The ones behind the wild and baseless incitement — such as that Israel is trying to prevent Muslim prayer at Har Habayis, or other wild accusations — are the ones causing the incitement,” he said.

“This incitement is coming from the ‘Muslim Brotherhood,’ the Islamic Movement in Israel, Hamas, and unfortunately, also the active participation of the Palestinian Authority.”

He also pointed a finger at Turkey, where he said Hamas official Saleh al-Arouri was not only inciting, but also seeking to send explosives to Har Habayis. “Explosive material in al-Aksa mosque is a change in the status quo,” he said.

The prime minister noted that more robust rules of engagement for police confronting rock and firebomb throwers have already been authorized.

Legislative solutions were still in the works. The government wants to see minimum sentences for those who throw dangerous projectiles, and punishment for parents of minors who throw stones and Molotov cocktails.

“We cannot accept the principle that in Yerushalayim, our capital, or in other parts of Israel, in the Galill or the Negev, people will organize grassroots terror and will start throwing bottles at passing cars or stones that kill people. This norm will not be established here — the opposite norm will be established,” he declared.

The government did not speak with one voice, however, as Attorney General Yehuda Weinstein said that he opposed mandatory minimum sentences and the changes in the rules of engagement, contradicting a prior statement from the Prime Minister’s Office that he had approved.

Netanyahu’s rhetoric of a crackdown was accompanied by a massive show of force on Friday, as heavy deployments of police and soldiers were ordered in response to a Palestinian call for a “day of rage.”

At least three Israeli policemen were injured by firebombs in disorders in the capital and eight Palestinians were shot. Thousands of security personnel, including several hundred border police reservists were mobilized to keep things from getting completely out of control there. Muslims under 40 were banned from attending the Friday morning prayers, a known vehicle for incitement.

Rioting was not limited to Yerushalayim, however. During disurbances at Kever Rachel, two Palestinians were shot and wounded while throwing firebombs, police said.

In eastern Yerushalayim, a municipal bus was pelted with stones and firebombed, forcing the driver to flee. By the time police arrived at the scene, the bus was engulfed in flames. B’chasdei Shamayim, the driver was only slightly hurt, and no passengers were injured.

The mayhem continued into Sunday. Arabs stoned an Israeli vehicle with rocks, as it traveled between Tekoa, in the Etzion Bloc, and the southern Yerushalayim neighborhood of Har Homa.

A married couple and their six-month-old daughter were in the car. B’chasdei Shamayim, although the car’s windows were shattered, the parents and child were unhurt.

The father told Arutz Sheva afterward that one rock hurled into the front of the car, flew over the baby’s head and struck the rear seat.

Over 30 suspects in the riots were arrested in Yerushalayim over Shabbos.

Also on Sunday, police were called out to subdue a man wielding a hammer or axe in the mall in Ramot, Yerushalayim. He disposed of the weapon before he was arrested, and police took him into custody for questioning.

Stone-throwers ambushed vehicles traveling on Highway 443 Sunday evening, but no injuries were reported.

Meanwhile, the United Nations Security Council issued a statement calling for “restraint, refraining from provocative actions…” which itself exacerbated the situation.

“Muslim worshipers at the Haram al-Sharif must be allowed to worship in peace, free from violence, threats and provocation,” the U.N. statement said.

This drew a furious response from Israel’s ambassador to the U.N., Ron Prosor: “This statement, which only uses the Arabic name for the Temple Mount, affirms the right of Muslims to be present and to pray at the compound, but completely ignores the Palestinian violence, the deep connection of the Jewish people to the Temple Mount, and the right of all to visit the site.”

The Anti-Defamation League (ADL) seconded his indignation, saying it was “appalled” by the one-sided statement.

The ADL accused the UNSC of ignoring the holiness of the site to Jews, and said it had “turned a blind eye” to Muslim violence and the anti-Semitic incitement by PA President Mahmoud Abbas.

Prosor also denounced Abbas, saying that he had chosen to “fuel the fire in the most shameful manner…The chairman of the Palestinian Authority encourages and legitimizes extremist Islamic activities with his anti-Semitic remarks.”

The PA president has in recent days also been talking with leaders in Jordan, Saudi Arabia and Egypt to spread the claim that Israel is trying to alter the status quo at the site.

As for the Israeli public, a Panels Politics poll taken for the Knesset found that, as of Thursday, 71 percent of respondents were dissatisfied with Netanyahu’s handling of the Palestinian terror, and only 24% were satisfied. Two-thirds said they felt threatened by the attacks.

When asked who they would like to see put in charge of dealing with terrorism, no clear majority emerged for anyone: 26% named Avigdor Lieberman, 21% said Naftali Bennett, 15% chose Moshe Yaalon. Ironically, only 8% mentioned Public Security Minister Gilad Erdan, the person who is officially responsible for maintaining law and order.