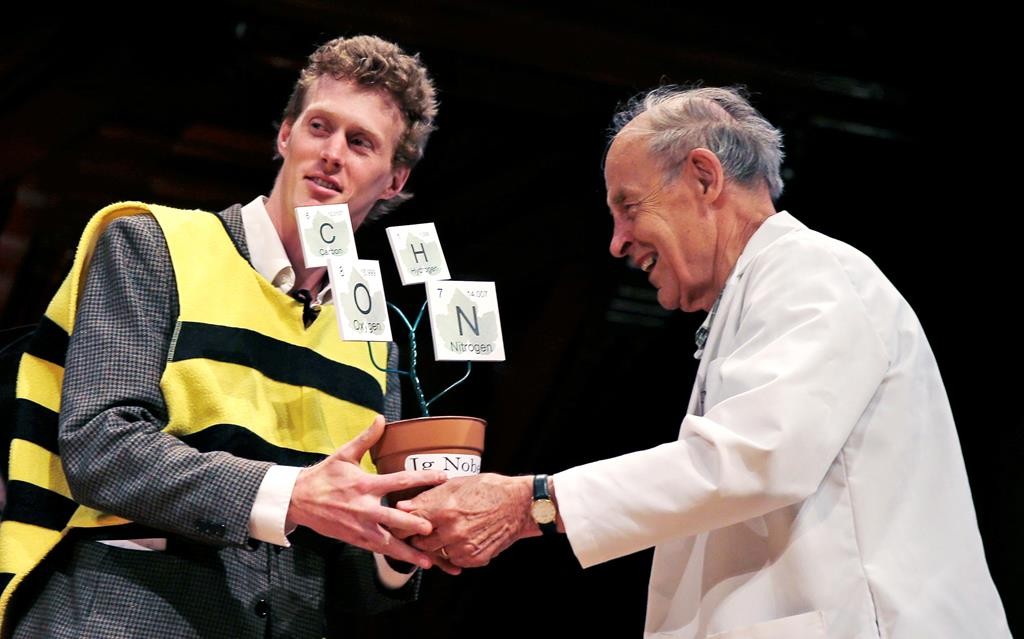 A New Yorker who allowed honeybees to sting him in 25 places and a group of scientists who discovered that “huh?” is a global expression are among the winners of this year’s Ig Nobels, which honor humorous scientific achievement.

Michael Smith, a Cornell University graduate student, estimates he was stung about 200 times during his 2012 honeybee study. His conclusion: The most painful places to get stung are the nostril and the upper lip.

“A sting to the nostril is so painful it’s like a whole body experience,” he said.

Other winners being honored Thursday night at the 25th annual ceremony at Harvard University include a trio of linguists who discovered that almost every language in the world uses the word “huh” for clarification and researchers who found that corporate CEOs take less risk if affected by natural disasters as children.

Real Nobel laureates hand out the prize: a Zimbabwean 10 trillion-dollar bill, the equivalent of a couple of U.S. dollars.

Mark Dingemanse and two colleagues at the Max Planck Institute for Psycholinguistics in Nijmegen, Netherlands, won the Ig Nobel for literature for determining that the word “huh” is used in languages around the world, including some of the most obscure.

“A system for fixing misunderstandings is clearly a crucial part of language,” he said. “‘Huh?’ is one element of this system: It’s the basic error signal people fall back on if all else fails.”

Raghu Rau, professor of finance at the University of Cambridge, and his colleagues won for their study that found business leaders more directly affected by natural disasters as children took less risk during their careers.

Rau uses Apple as an example. Late CEO Steve Jobs, who lived through a deadly landslide near his home in San Francisco as a child, ran the company conservatively. His successor, Tim Cook, witnessed few fatalities despite regular tornadoes while growing up in Alabama and has made more risky business decisions.

“Think of yourself as a member of a board of directors: When you try to hire a CEO, do you want a risk taker or not?” Rau said.

As usual, the winners were thrilled with the honor. “Sometimes these crazy things provide a lot of insight,” said Schmidt, the bug guy.