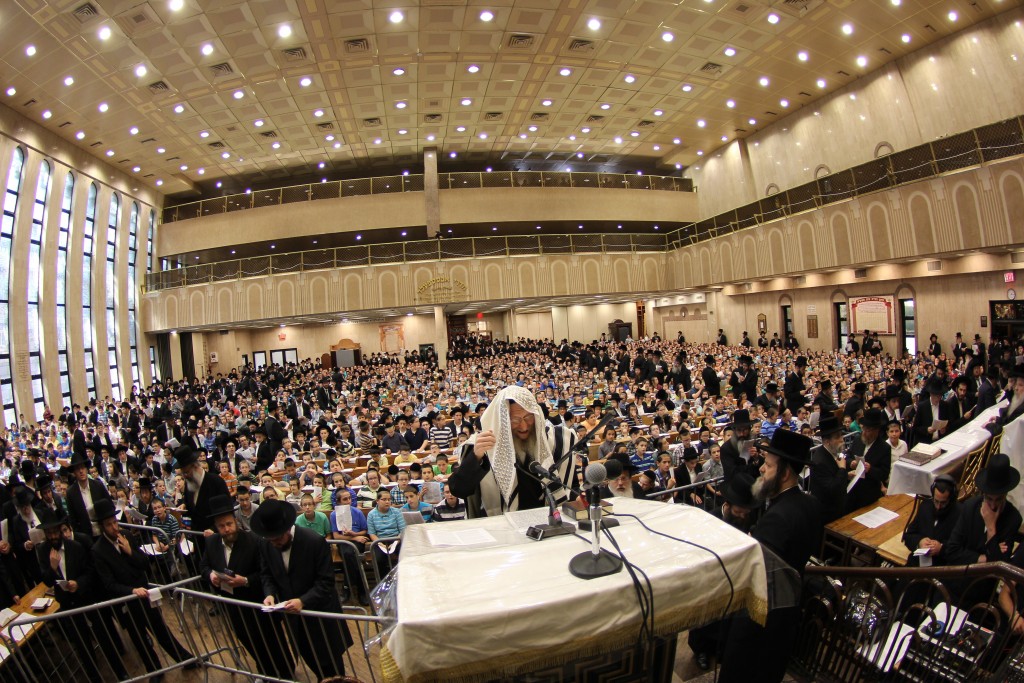 It was an asifah most apropos as a preparation for the hisorerus of Yom Kippur. Many Admorim, Rabbanim, and Roshei Yeshivah came together with thousands of tinokos shel beis rabban for the 22nd annual Asifas Tehillim Ha’olami. The event, a massive gathering for tefillah, Tehillim and hisorerus on behalf of the ill and all those suffering adversity in Klal Yisrael, took place on Thursday, 4 Tishrei/Sept. 17, at the Bobover beis medrash on 15th Avenue and 48th Street in Boro Park.

It was impossible not to be moved by the awesome scene ­— a vast sea of children collectively pleading with the Ribbono shel Olam for Heavenly compassion on behalf of Klal Yisrael, their voices booming in fervent tefillah — especially during “Avinu Malkeinu,” “Amein, yehei Shemei Rabba,” “Shema Yisrael” and “Hashem Hu HaElokim.” These fervent bakashos recited by these pure neshamos, we pray, made their mark in Shamayim and generated much-needed zechuyos for Yidden worldwide.

The asifah was especially significant now, in view of tragedies that have rocked Jewish communities locally and worldwide in the last year, and the many other physical and spiritual challenges facing our communities.

The annual event is, fittingly, organized by Misaskim, which is known for its remarkable work in providing support and assistance to individuals and families encountering crisis or tragedy, R”l, with compassion and professionalism.

The asifah was transmitted to numerous locations worldwide. In the past, it has included the participation of yeshivah children in cities such as Baltimore, Cleveland, Chicago, Dallas, Memphis, Milwaukee, Montreal and Toronto, as well as sites in the states of California, Connecticut, Indiana, Florida, Georgia, Massachusetts, Michigan, Minnesota, Missouri, Pennsylvania and Rhode Island. Internationally, it has included communities in London, Manchester, Gateshead, and locations in Holland, as well as in Mexico City and sites in Argentina, Chile, Colombia, Costa Rica, Panama and Venezuela.

Countless Yidden took part by ceasing their activities and reciting Tehillim wherever they were at the time of the asifah, and they were able to follow the proceedings on the Kol Mevaser telephone line.

Chazal place great emphasis on the efficacy of the tefillos of children in annulling gezeiros raos and bringing blessings and hashpaos tovos to Klal Yisrael (Maseches Shabbos 119b). The hisorerus generated by the asifah will hopefully effect many yeshuos for Klal Yisrael.

All who participated in the gathering will cherish its effects for a long time to come.