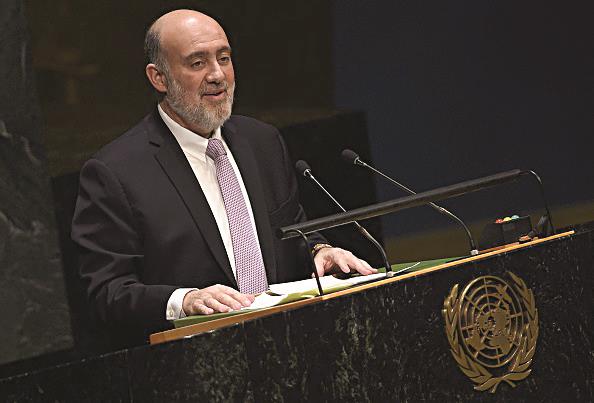 While the Palestinians are touting their UN flag-raising as a landmark to statehood, Israeli envoy Ron Prosor has derided it as a meaningless photo-op and a disgrace to international diplomacy.

After approval from the General Assembly, the Palestinians invited hundreds of world leaders to attend their flag-raising ceremony at the UN on Sept. 30, AFP reported on Tuesday.

But Prosor had his say about the matter, which may take some of the air out of the whole inflated business. After the UN vote, Prosor, who will soon be stepping down as ambassador, treated the the delegates to a farewell assessment in scathing style:

“In my four years, I have seen hypocrisy, I have seen duplicity, and I have seen a triple standard — one for democracies, one for dictatorships, and a special standard designed only for Israel,” Prosor said.

“I thought I had seen everything. But I have to admit, this time, the Palestinian managed to take cynicism to a whole new level. The goal of this resolution is a photo op. The Palestinians want to bring together world dignitaries and the media to gather around and watch as Palestinian Authority President Mahmoud Abbas raises a flag. They plan to use the prestige of the UN as a backdrop for this charade.

“The assembly would vote to declare the Earth is flat if the Palestinians proposed it.” However, he said no vote can turn “empty symbolic gestures into a state.”

The United States and Israel were among eight countries that voted against the Palestinian-drafted resolution, which says the flags of non-member observer states like Palestine “shall be raised at (UN) Headquarters (in New York) and United Nations Offices following the flags of the member states.” The issue split the EU, most of whom abstained. France and others supported the move.

If the Palestinians would present a resolution declaring the world flat, the EU would “probably try to reach a consensus to abstain on the vote,” Prosor said. “But some EU countries would consider it a matter of principle to declare that the world is, indeed, flat ­— if this is how the Palestinians see it.”