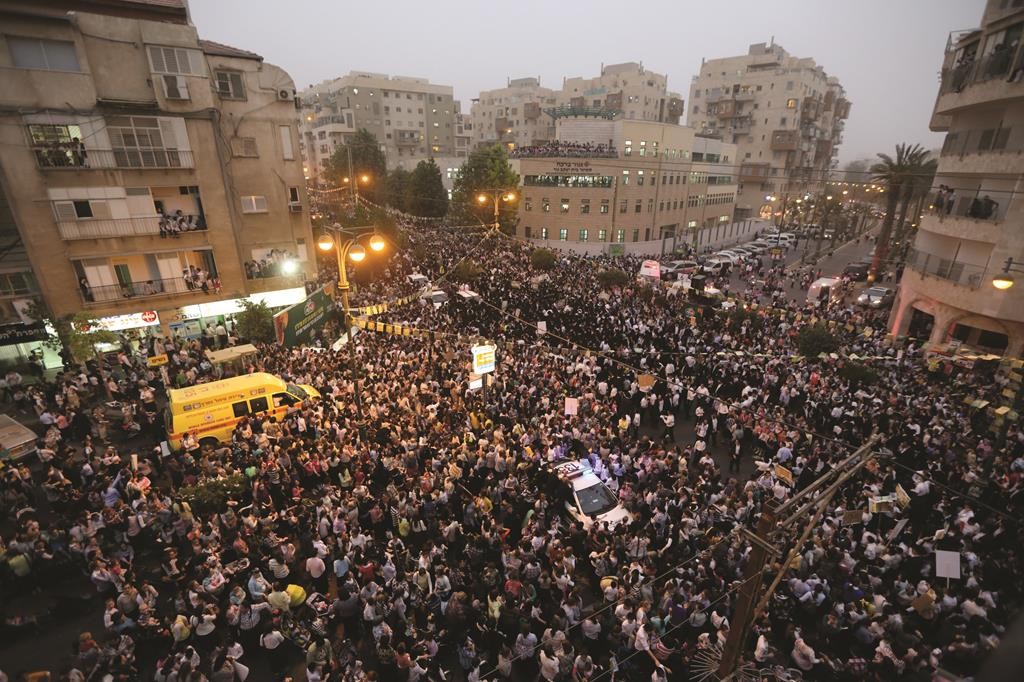 More than 100,000 people filled the main streets of Bnei Brak on Wednesday night to honor the Shemittah-observant farmers from around the country who fulfilled the Torah commandment of not working the land during the seventh year.

Thousands of farmers and agricultural workers rode in a parade of tractors and trucks through downtown Bnei Brak, whose streets were lined with adults and children.  Music played, and people danced and sang along and cheered for the farmers who let their fields lie fallow and trusted in Hashem for their livelihood.

Rabbi Yitzhak Zilberstein, shlita, visited Rav Steinman at his Bnei Brak home to receive brachos on behalf of the farmers.
“[Shemittah] is a sublime commandment which raises the stature of farmers, and G-d willing, the Alm-ghty will merit us to be able to keep the Shemittah as a full Torah commandment,” said Rav Steinman, referring to the fact that most poskim consider it a rabbinical commandment in our time.

Before the parade, Nasi of Keren Hashviis Harav Yitzchak Yisrael Mendelson, chairman Harav Ben Tzion Kugler and director-general Harav Binyamin Cohen presided over a massive reception for the heroes of the day in a hall in Givat Shmuel, adjacent to Bnei Brak. The Rosh Yeshivah of Ohr Hachaim, Harav Reuven Elbaz, shlita, in his address, noted that Shemittah observance does not end on Rosh Hashanah but continues well into the eighth year before they can resume normal agricultural work.

“Sometimes, it is particularly in the eighth year when there are financial difficulties that regrets are felt.

“You, my brothers, giburei koach, must continue to be strong to the end. There is no other mitzvah where the Torah refers to those who fulfill it as giburim, ‘mighty ones.’ Carry on, for you are the mighty ones of the entire Jewish people,” Rav Elbaz said.

United Torah Judaism MK Rabbi Moshe Gafni praised the heads and activists of Keren Hashviis, saying he has been involved with them not throughout the year, and he can testify to their rare dedication in giving the farmers the material and spiritual support they needed.

“When we pray on Rosh Hashanah for us to be written in the Book of Merit, we all have you in mind, the farmers who sacrificed themselves in order to fulfill the [commandments of the] Shemittah year,” he told the farmers. “You are the ‘mighty ones of power’ of the Jewish people and your merit protects us all,” he declared.

A farmer who had kept Shvi’is for the first time in his life spoke movingly of his experience.

“I took upon myself this mitzvah,” he began in a voice quavering with emotion, “because of my son, who asked me to do it as a gift for his bar mitzvah. It was the best decision I have ever made in my life. I thought it would be a gift for my son. In the end I realized that he was the one who gave me the gift.

“I regret that I did not observe Shemittah k’hilchasah until this year. My friends and I saw open miracles with our own eyes. Others who relied on doubtful leniencies saw no blessing in their produce…but we saw miracles during the war in the south. The day will come when I will tell that story in detail,” he promised.

As the procession made its way slowly through the center of the city, Harav Binyamin Cohen called out the name of each farmer on the Keren Hashviis list, as the huge crowd responded with cheers to each name.

Keren Hashviis provides funds for farmers who do not work the land, to cover the loss of their annual incomes. The budget for this year was $22.5 million, with a shortfall as of August of about $4 million.
Under its supervision, some 81,500 acres of land were left fallow, with 3,500 farmers refraining from cultivation.