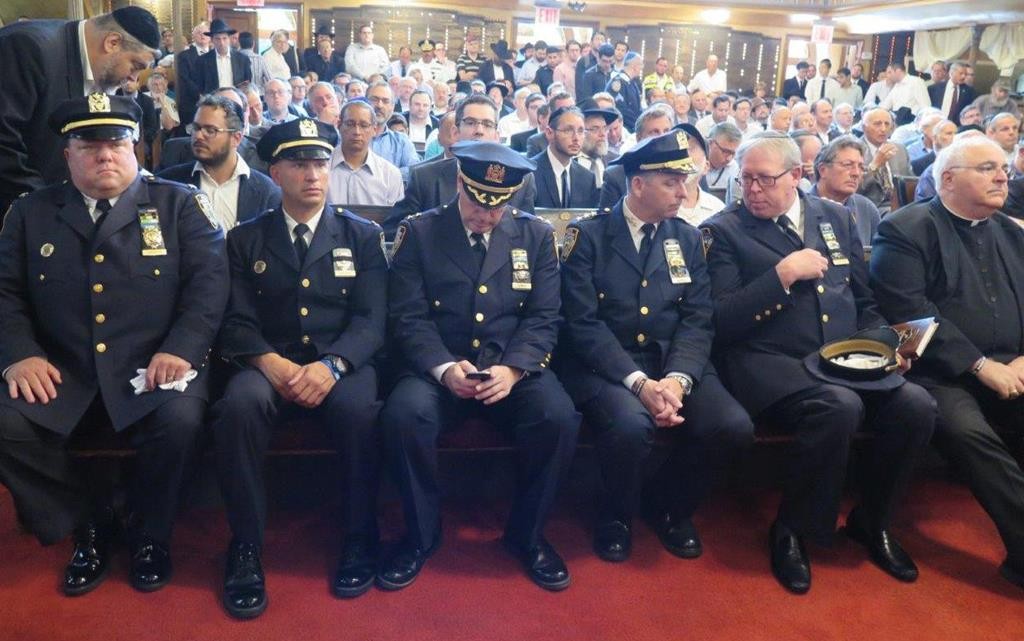 Hundreds of people packed a double levayah Wednesday morning at a Lower East Side shul for the couple who lost their lives in a horrific car crash, in a service combining the pomp of police officers honoring the memory of a 9/11 first responder, Hatzolah members bidding farewell to a beloved colleague and friends and family mourning the passing of a loved one.

Morris (Moshe Mendel), 58, and Beth (Baila Chana), 54, Faitelewicz, z”l, were remembered at the levayah in the Bialystoker Shul two days after their car flipped over on Rt. 17 as they were returning from a vacation weekend. Their intended son-in-law, Yehuda Bayme, z”l, who also perished in the crash, had his levayah on Tuesday in his hometown of Riverdale.

Morris was a former auxiliary police officer, a member of Hatzolah and a member of Community Board 3. Beth was a nurse at Beth Israel Hospital. Their two sons, Yaakov and Avi, who survived the crash, both spoke at the levayah. Shani, the kallah, who remains hospitalized after leg surgery, could not attend but sent in a letter that was read by Rabbi Zvi Romm.

She described the excitement the family had when she got engaged to Yehuda at the end of June, and how her father was looking forward to the chasunah, whose date had just been announced.

“I wish they could be by my bedside now,” she wrote.

Dozens of police officers and hundreds of Hatzolah members lined up outside the shul to escort the two aronos as they left.

The Faitelewiczes were also remembered on the floor of Congress Wednesday by Rep. Nydia Velázquez, a Democrat from Williamsburg.

“Mr. Speaker, on Monday, three New Yorkers — Morris and Beth Faitelewicz, who celebrated their 33rd wedding anniver sary in June, and Yehuda Bayme, fiancé to their only daughter — lost their lives in a Sullivan County car accident,” Velázquez said in a floor speech.

“This tragedy is being felt deeply in the Lower East Side,” she said. “Not only were they respected community members, but Morris and Beth had been involved in response and recovery efforts on 9/11. I ask my colleagues to join me in honoring the memories of Morris and Beth Faitelewicz and Yehuda Bayme.”

Kevurah was at the New Montefiore Jewish Cemetery in Long Island.