When Big Rigs Push Past the Safety Rules 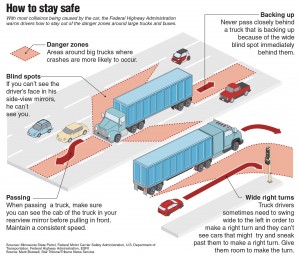 The semitrailer truck rumbled south down Houston County Road 9, a two-lane highway that rolls across the fertile farmland of southeast Minnesota, on an overcast Saturday morning in March. The roads were clear of ice and snow, and the truck’s trailer was loaded with giant bales of hay.

Dale and Teresa Erickson, married for 26 years, were cruising north in their pickup.

Both vehicles were headed for a curve.

When the semi driver felt the hay shift, he slammed on the brakes. But it was too late. Ten bales, each weighing an estimated 1,200 pounds, flew off. One crushed the pickup’s cab. Passersby dragged Teresa out, but the pickup caught fire with Dale pinned inside. Both died within days.

The truck’s owner and driver, Randall Hongerholt, faces four misdemeanor charges, including failing to secure the load — the kind of violation that would have been caught during a roadside safety inspection. But federal records show that Hongerholt, who put on about 5,000 miles a year transporting grain, feed and hay, hadn’t undergone such a check from a certified inspector since October 2000, after a crash in which someone was injured.

Millions of large trucks crisscross state and federal highways every day, hauling billions of tons of goods from factories, fields and warehouses. Federal and state regulations govern truckers’ driving hours, equipment maintenance and load sizes, but enforcement of those rules through surprise roadside inspections has been falling nationally.

Even the weigh stations that dot the highway system are equipped to inspect just a small fraction of the trucks that pass through. Last year, for example, 433,078 vehicles went through a Minnesota weigh station on Interstate 94 while it was open. About 3,800 were inspected.

The trucking industry argues that inspections take time and cut into productivity, especially for carriers that invest heavily in training and safety. Inspections should target carriers with a history of problems, they argue. Over the long haul, they say, the rate of fatal truck crashes has declined (despite a recent increase), and most collisions involving trucks are caused by the driver of a car or other passenger vehicle.

Each state has its own roadside inspection program, partly funded through the Federal Motor Carrier Safety Administration, which is charged with reducing crashes involving large trucks and buses.

Carriers with a history of violations are the ones inspectors should be targeting, safety advocates and trucking associations say.

Giant trucking companies, which typically have more money to invest in equipment and safety, are overinspected because they have so many trucks running everywhere, said Brenda Lantz, associate director of the Upper Great Plains Transportation Institute at North Dakota State University. Companies with just a few trucks and drivers who own their rigs are more likely to cut safety corners to keep costs down, experts said.

“I don’t know if we could ever have enough enforcement officers,” Lantz said. “You’ll never get enough funding.”

In Minnesota, truckers paying $15.75 a month can subscribe to Drivewyze, an internet-based service that uses a smartphone or other web device to check safety records and sometimes allows them to bypass a couple of Minnesota weigh stations if their records are satisfactory. Most states use such programs giving historically safe carriers the possibility — but not a guarantee — of forgoing a time-consuming stop.

“It helps the traffic flow … helps us not to focus on the good carriers,” Nielson said.

Also, trucks that pass a full inspection with no critical violations get a decal good for up to three months, signaling that they don’t need to be inspected unless there is an apparent reason.

Conversely, carriers with too many poor inspections can be subject to more thorough investigations with federal or state compliance reviews at their place of business.

“I would rather see people enforcing the speed limits on trucks than worrying about whether it’s got all its lights running or working and all its mirrors attached,” Scott said. “That can be handled. … Focus on traffic law enforcement and those things that actually cause crashes.”

Scott Grenerth, director of regulatory affairs for the trade group that represents small carriers and individuals, the Owner-Operator Independent Drivers Association, said owner-operators have better safety performance than large companies because they have more at stake.

Studies vary on who is typically at fault when trucks and other vehicles collide. Trucking-industry leaders point to studies showing that passenger vehicles are overwhelmingly responsible for crashes. But in a national Large Truck Crash Causation study, looking at fatal and injury crashes in the early 2000s, trucks were assigned the “critical reason” — why something happened to make a crash inevitable — in 44 percent of such collisions. And in those crashes, 87 percent were attributed to driver error and 10 percent to a vehicle defect.

Brakes are among the most common commercial vehicle violations.

Even with fully functioning brakes, it can take the length of a football field for a semi to stop from highway speeds. The laws of physics weigh heavily against people in passenger vehicles colliding with large trucks: 97 percent of those killed in such crashes were occupants of the passenger vehicle in 2013, according to the Insurance Institute for Highway Safety.

Websites and smartphone apps are dedicated to letting truckers know whether weigh stations are open.

“The ones that actually drive into the weigh stations, those are the ones we probably don’t need to be looking at,” said Wes Pemble, a former Minnesota inspector who now works as a safety consultant with trucking companies. “Some have reason to make a good effort to get around those weigh stations.”

Thomas Gilpin had a reason one early December morning a few years ago.

He couldn’t get a load of road salt distributed properly across his trailer, which would have been a problem at weigh stations. He called his Iowa trucking company, and was told he’d have to “take a two-lane” instead of bigger roads, Gilpin said later in a deposition. A company dispatcher, in another deposition, did not recall telling Gilpin to take two-lane roads.

That route added hours to his trip from Kansas to southwest Minnesota, and pushed Gilpin far beyond the number of hours he was legally allowed to drive.

His wife and co-driver, Laura, lay in the sleeper berth behind him, unable to help drive because she was sick. The clock ticked toward 3 a.m. Gilpin gulped coffee and opened his window, hoping the sting of 7-degree air would keep him awake. He was determined to deliver the load on time.

He remembered feeling a bump, then careening toward a utility pole.

“I tried to bring it out,” he told an insurance investigator. “It’s just that fast.”

When Gilpin came to, the truck was on its side and he saw blood in the cab. He screamed for Laura, but she never answered. At a hospital, a nun told Gilpin that Laura hadn’t survived.

One of the couple’s two sons, Lucas Gilpin, said the pressure on truck drivers leads to tragedies like the one his family faced.

Companies won’t explicitly tell drivers to ignore federal rules, he said, but if a load is late because of a traffic jam or long lines at a loading dock, the driver is the one in trouble.

The pressures of truck driving are worn on the haggard faces of the drivers.

Nebraska trucker Brian Knott plopped down at the counter of a South St. Paul truck stop, his scraggly beard and orange T-shirt smudged with grease. It had been a tough week.

Knott, 43, had to deliver a crane part to Minnesota by 8 that morning or get docked $100 for every hour he was late, he said. But the water pump on his 2000 Freightliner broke as he drove from Texas, costing him hours. He managed to make the delivery on time, but then a dispatcher scheduled him for a pick-up at the same time.

When he finally got there that afternoon, he saw the load of heavy-gauge wire mesh with sharp edges that would have ripped his tarps to shreds. The cost of new tarps would have negated the $1,000 or so that he’d be paid for the haul. He turned down the job.

He parked his rig overnight, ordered a dinner of chicken-fried steak and eggs, and hoped for a better load in the morning.

Besides delivery deadlines and demanding dispatchers, he and other drivers at the truck stop said they have to deal with poor weather and a constant barrage of drivers cutting them off or tailgating.

Maintaining equipment is expensive and time consuming, too, and many drivers are paid by the mile, an incentive to cover as much ground as quickly as possible.

While most drivers are careful about safety, some cut corners, the truckers acknowledged.

Knott recalled helping a new flatbed driver at an Iowa truck stop who had strapped down a tall load of metal pipes incorrectly. After helping the man, Knott said he called the company to chew out the bosses for not training the driver.

Knott said his father, also a driver, offered the best description of the giant trucks that they maneuver around the country: “40 tons of death.”

And yet, Knott said, he avoids weigh stations. “I know how to get around almost all of them.”

Florida truck driver Paul DeMars, eating pasta nearby, shook his head as he listened. “We’ve got too many truck drivers out here that don’t want to take care of their (problems), going up and down the road because they want to put that extra money in their pocket,” he said. “Got a light out? Fix (it).”

“But does a light burn out in the yard?” another driver interjected. “You can leave with everything working … what are you going to do, stop every five miles, run around and make sure all your lights are working?”

With nearly 4,000 people killed each year in large-truck crashes, safety advocates are frustrated there isn’t more attention to safety.

Steve Keppler, executive director of the Commercial Vehicle Safety Alliance, which sets inspection protocols across North America, agrees. If that many people died in commercial air crashes, he said, “we’d shut down the airspace.”

Developing better systems and increasing inspections overall is a matter of resources, he said: “Inspection level is commensurate with funding levels.”

Federal funding has remained about the same in recent years, Keppler said, but increased regulations have given inspectors more responsibilities.

While federal regulators look to technology and changing regulations to increase safety, those changes are often met with opposition. Late last year, Congress rolled back a rule about truckers’ mandated time off. Now, Congress is considering allowing longer semitrailers on the road.

“These carriers are allowed to perform their business on publicly funded roads that are paid for by the American people,” said Shaun Kildare, director of research for Advocates for Highway and Auto Safety. “I think we should hold them to a good standard.”