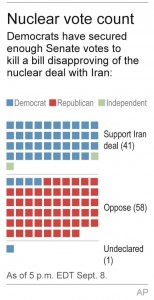 Pressing their advantage, the White House and insistent Senate Democrats locked up the votes Tuesday to frustrate attempts by outraged Republicans to pass a legislative rebuke to the Iran nuclear accord.

Three previously undeclared Senate Democrats — Richard Blumenthal of Connecticut, Ron Wyden of Oregon and Gary Peters of Michigan — announced their support for the international agreement in a coordinated burst. That pushed supporters to the crucial 41-vote total that would allow them to block a disapproval resolution with a filibuster, and prevent a final vote.

“There is no better deal available now,” declared Blumenthal, one of the Senate’s Jewish Democrats, announcing his support.

The three lawmakers were among a handful of undeclared senators and were all considered possible “no” votes. Coming on the first day of Congress’ fall session after a five-week summer recess, their announcements were a dramatic start to what promises to be a bitter partisan debate on the deal.

On Wednesday presidential candidate Donald Trump is preparing to headline an anti-accord rally outside the Capitol. It will play out at the start of a hectic three weeks on Capitol Hill. Congress must also find a way to fund the government funded past Sept. 30, and lawmakers will host a visit from Pope Francis.

It remained uncertain Tuesday if all 41 senators now on record in favor of the Iran deal would hold together on the procedural maneuvers necessary to mount a filibuster. And the developments didn’t change the ultimate outcome, which has been clear for days: Even if the disapproval resolution should pass the House and Senate this week, President Barack Obama would veto it, and Democrats have the votes in hand to sustain his veto.

But Obama and his Democratic allies now have within reach the possibility of stopping the resolution without a messy veto fight, despite the unanimous opposition of the Republicans who control both the House and the Senate.

“If we have to go through the procedural charade of a veto, and a vote to sustain the veto, it will be embarrassing for this administration and this country,” said Sen. Chris Murphy (D-Conn.), who’s been involved in coordinating support for the agreement. “So I think it’s cleaner, simpler and much better for American credibility around the world if the motion to disapprove doesn’t get past the Senate.”

Republican opponents on Capitol Hill complained angrily about Democratic attempts to avoid a final vote on the disapproval resolution. The pro-Israel lobby AIPAC was also pressuring senators behind the scenes to allow a final vote even if they intend to oppose the disapproval resolution, creating uncertainty as to whether a filibuster would succeed.

“The Senate should not hide behind procedural obfuscation to shield the president or our individual views,” said Senate Majority Leader Mitch McConnell (R-Ky).

Sen. Bob Corker of Tennessee, top Republican on the Foreign Relations Committee, delivered an impassioned speech that was a broadside against the Obama administration.

“We know we have no policy in the Middle East,” Corker said. The Iran deal “ends up being our de facto policy.”

On the other side, the No. 2 Senate Democrat, Dick Durbin of Illinois, said: “What the president is trying to do is something that I believe should be the starting point in every critical foreign policy decision: Use diplomacy.”

The agreement struck by Iran, the U.S., China, Russia, France, Britain and Germany in July would provide Iran hundreds of billions of dollars in relief from international sanctions in exchange for a decade of constraints on the country’s nuclear program. The deal aims to keep Iran at least a year away from being able to produce enough nuclear material for a weapon.

Even as they faced the prospect of legislative defeat, Republicans tried some last-ditch maneuvers to avoid that outcome.

In the House, Republican Rep. Peter Roskam of Illinois offered a resolution to delay the vote, arguing the clock on the congressional review period shouldn’t start until lawmakers get more information on side agreements negotiated with Tehran. Speaker John Boehner (R-Ohio) also touted a letter from 15 GOP governors saying they plan to maintain state-level sanctions against Iran.

Nearly lost in the developments, the anti-deal side picked up one surprise adherent: Sen. Joe Manchin of West Virginia, a moderate Democrat who had widely been counted in the “yes” column after making positive comments about the deal, became the fourth Senate Democrat to oppose it. “I’ve always said if I can’t explain it back home, I can’t support it,” Manchin said.

This article appeared in print on page 1 of the September 9th, 2015 edition of Hamodia.