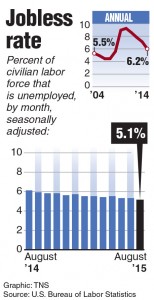 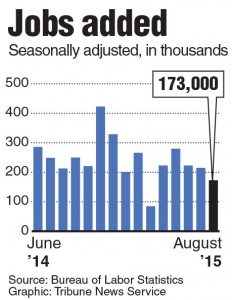 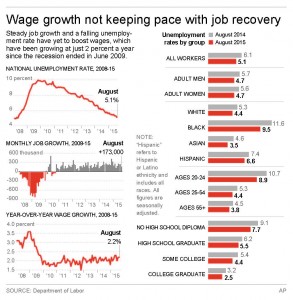 U.S. unemployment fell to a seven-year low of 5.1 percent last month, but hiring slowed – a mixed bag of news that offers few clues as to whether the Federal Reserve will raise rock-bottom interest rates later this month.

The Labor Department report, issued Friday, was closely watched because it will be the last snapshot of the job market before the Fed meets in two weeks. And overall, it painted a picture of an economy growing at a modest but steady pace seven years after the Great Recession.

But it wasn’t the unambiguous signal many on Wall Street were hoping for.

The unemployment rate fell from 5.3 percent in July to its lowest point since 2008 and is now at a level Fed officials say is consistent with a healthy economy. But employers added a moderate 173,000 jobs in August, the fewest in five months.

“Anyone hoping today’s data would clear up the timing of the Fed’s first rate hike in years will be sorely disappointed,” said Megan Greene, chief economist at John Hancock Asset Management.

Higher rates would most likely push up borrowing costs for mortgages and other loans for consumers and businesses, and some on Wall Street fear that could put a damper on corporate profits and the larger economy.

The Fed cut the short-term rate it controls to a record low of nearly zero in December 2008 to try to stimulate growth during the Great Recession.

For months, Fed officials have been saying the economy appears to be getting strong enough to tolerate the first increase in interest rates in a decade. They have signaled that they might raise rates at their Sept. 16-17 meeting.

Yet other factors have clouded those predictions lately.

For one thing, there are signs that China’s economy, the second-largest in the world, is stumbling, which could drag down global growth. The slowdown has already caused violent swings in the financial markets that could undermine consumer confidence.

Friday’s report suggested to many economists that the U.S. job market, at least, has satisfied the Fed’s criteria.

“We’re well on our way to full employment if we aren’t already there,” said Carl Tannenbaum, chief economist at Northern Trust and a former Fed official.

Even the slip in hiring last month may not end up as bad as it looks. August’s jobs totals are typically revised much higher in later months, because of the difficulties in adjusting the data for the end of millions of summer jobs.

Also, consumer spending has been healthy and has been powering job growth at retailers, restaurants and hotels. State and local governments added 31,000 jobs in August, while health care gained 40,500.

Still, manufacturing companies have been stumbling amid the global headwinds. They cut 17,000 jobs in August, the most since July 2013.

And there are signs that job growth is still not back to full health. Hourly wage growth remains sluggish. And the proportion of Americans working or looking for work is stuck at a 38-year low.

“A bumper payrolls number would have sealed the case for higher interest rates in many people’s minds,” he said, “while a low number would have dealt a blow to any chances of tightening of policy at the next meeting.”