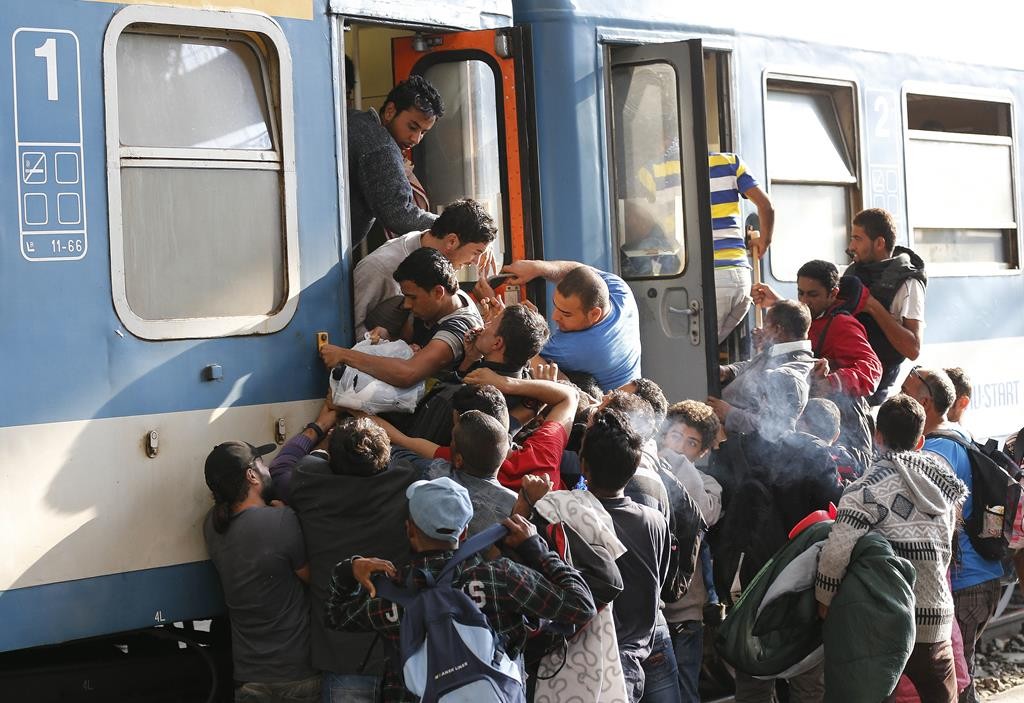 Migrants forced from a train in Hungary scuffled with helmeted riot police and some clung to railway tracks on Thursday, as politicians across Europe struggled to respond to public opinion appalled by images of a drowned 3-year-old boy.

France and Germany said European countries must be required to accept their shares of refugees, proposing what would potentially be the biggest change to the continent’s asylum rules since World War Two.

Nearly all first reach the EU’s southern and eastern edges before pressing on for richer and more generous countries further north and west — above all, Germany, which has emphasized its moral duty to accept those fleeing genuine peril.

Accusing some European countries of failing to “assume their moral burdens,” French President Francois Hollande said he had agreed with German Chancellor Angela Merkel on “a permanent and obligatory mechanism” to allocate refugees across the bloc.

Politicians across the continent acknowledged the impact on Thursday of images of a 3-year-old boy in a red T-shirt and tiny sneakers face down in the surf of a Turkish beach, which gave a haunting human face to the tragedy of thousands dead at sea.

The boy’s 5-year-old brother Galip and 35-year-old mother Rehan were also among 12 people who died when two boats carrying 23 capsized while trying to reach a Greek island.

“Let This Be the Last”

His father Abdullah Kurdi, who was rescued barely conscious, collapsed in tears after emerging from a morgue where the bodies were held.

“The things that happened to us here, in the country where we took refuge to escape war in our homeland, we want the whole world to see this,” Abdullah told reporters.

“We want the world’s attention on us, so that they can prevent the same from happening to others. Let this be the last,” he said.

Hungary has emerged as the primary entry point for those reaching the EU overland across the Balkans, and its right-wing government has become one of the most vocal on the continent opposing large-scale immigration.

Thursday brought a days-long stand-off to a pitch as Hungarian authorities who refused to let migrants board trains for Germany for days finally allowed hundreds onto a train bound for the Austrian frontier — only to halt it at Bicske, a town outside Budapest with an immigration registration center.

Hundreds of exhausted people had crammed aboard, clinging to doors and squeezing their children through open carriage windows. When the train was halted, most refused to get off.

Police cleared one carriage, while five more stood at the station in the heat. Fearing detention, some migrants banged on windows chanting “No camp! No camp!”

Hollande’s announcement of an agreement with Merkel on a mandatory system to allocate refugees would transform the asylum rules for the 28-member EU, which operates common frontiers but requires countries to process refugees separately.

The major EU countries have taken sharply opposing positions on how far to open their doors, symbolized most prominently by Germany and Britain.

Germany, led strongly on the issue by Merkel, plans to receive 800,000 refugees this year and has budgeted billions in additional welfare spending for them.

Britain, by contrast, has set up a program to allow in vulnerable Syrians that has admitted just 216. It has also granted asylum to around 5,000 Syrians who managed to reach British shores since the war began four years ago, but Prime Minister David Cameron has opposed mandatory EU refugee quotas.

“There isn’t a solution to this problem that’s simply about taking people,” he said Thursday.

Other EU states are also likely to strongly resist a system that would require them to take in large numbers of refugees.