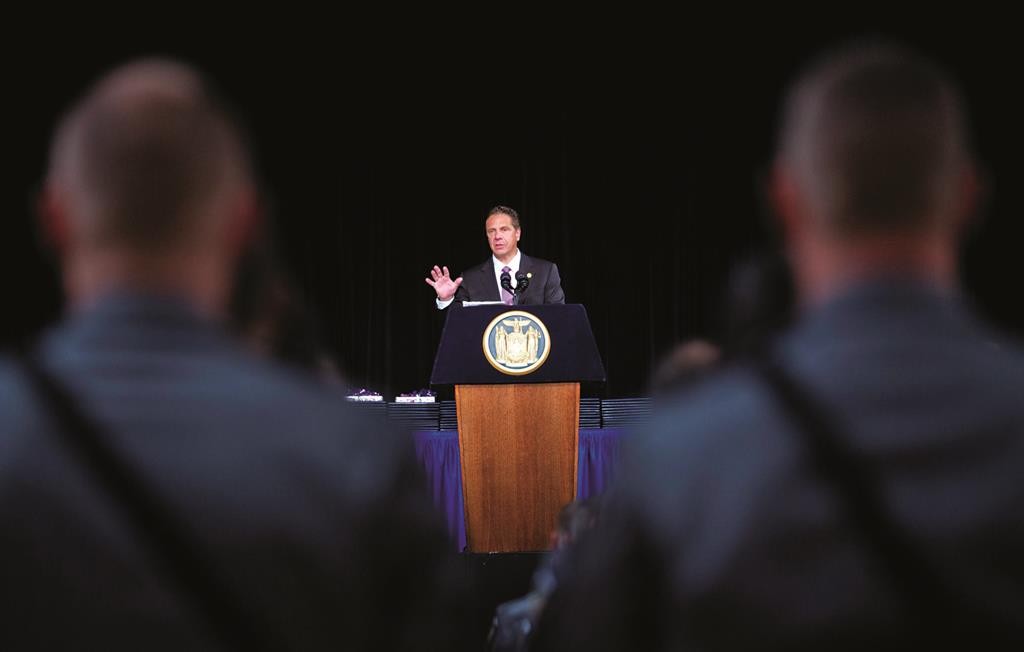 Gov. Andrew Cuomo told state troopers Thursday that their jobs over the next 20 years would include more emergency responses to major storms, cybersecurity threats, evolving terrorism, emerging diseases and other public safety threats.

In an address to 199 graduates of the State Police Academy, their families and other troopers, Cuomo said it would be a different job than just enforcing New York’s criminal and traffic laws. “This is a complicated and changing world,” he said.

The governor repeated that message a few hours later to the New York City Patrolmen’s Benevolent Association, adding that the city remains a focus of terrorism. He said its police officers deserve credit for its economic resurgence, making it safe, which has brought in tourists and businesses alike.

“You have saved the city of New York,” Cuomo told a few hundred PBA members.

The union gave him its man-of-the-year award. He received a standing ovation at the group’s convention at a hotel in the Albany suburbs when he said it’s “unconscionable” that they should get lower pension benefits than police in other departments.

Patrick Lynch, who was re-elected union president, said at one time the city wasn’t a safe place to be, even for police in full battle regalia. He said they changed that block by block. “It’s a dangerous job, but we love to do it,” he said.

Addressing the new troopers earlier at Empire State Plaza, Cuomo recalled that his father, the late Gov. Mario Cuomo, experienced 11 nationally declared storm emergencies during his 12 years in office, while there have been nine in the past four years while he’s been governor.

The graduates bring the total force of sworn officers to 4,842, according to state police. The 199 new troopers include 28 women and 30 minorities.

Cuomo presented a flag to Angela Fredenburg, widow of Trooper Donald Fredenburg, who was stricken at the academy during a fitness run in March. Authorities said the U.S. Marine veteran from Utica had an undiagnosed arterial blockage.