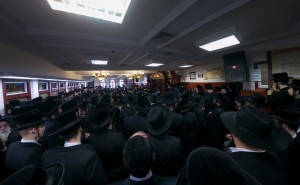 The community of Boro Park and particularly the kehillah of Skolya bid a mournful farewell to, Rabbi Yosef Boruch Pinchos Rabinowitz, z”l, son of the late Skolya Rebbe, zy”a, who was the driving force behind the instillation of his son as Rebbe. He was 92 years old.

He was remembered for his exceptionally regal and refined manner as well as his love and dedication to Torah. Above all, he devoted himself to the heritage and continuity of Skolya Chassidus.

Reb Boruch was born in Vienna on Yom Kippur of 1923 to the previous Skolya Rebbe, Harav Dovid Yitzchok Isaac. He was raised in the heart of his father’s court, steeped in the ways of his holy ancestors: the Baal Shem Tov, Rav Baruch of Mezhbuzh, the Zlotchover Maggid, as well as many other tzaddikim, zechusam yagen aleinu. While spending most of his career practicing law, his bearing and demeanor clearly distinguished him as one who had been raised in a royal house.

In his youth he studied mainly in the yeshivah of the Mattersdorfer Rav, Harav Shmuel Ehrenfeld, zt”l. There, young Boruch became well known for his great diligence in learning as well as his middos tovos. During this period he also received semichah from several Rabbanim.

The family managed to escape war-torn Europe and arrived in America in the early 1940s. There, Reb Boruch married Freida Cywiak, daughter of Harav Leibel Cywiak, z”l, who led the Gerrer shtiebel of the Upper West Side for many years and was a moving force in the growth of Beth Medrash Govoha of Lakewood.

Upon his father’s passing in 1979, Reb Baruch was the most influential figure in seeing that his son, who was not yet 20 at the time, be installed as Rebbe and continue the proud legacy of Skolya. Not only did the niftar dedicate himself to the financial support of the Chassidus, with great deference he conducted himself as a Chassid of the young Rebbe, loyally attending his tefillos and tishen.

During his years practicing law   Boruch was extremely careful in maintaining regular sedarim in learning and, in the decades since his retirement, dedicated most of his time to limud Torah, maintaining several chavrusos. He was known for his great generosity, helping countless individuals in need, as well as for his humble and pleasant manner.

He is survived ybl”c by his wife, Mrs. Freida Rabinowitz, and sons: the Skolya Rebbe, Harav Yisroel Mordechai, and Harav Dov Berish, as well as many grandchildren and great-grandchildren.

This article appeared in print on page 1 of the September 3rd, 2015 edition of Hamodia.