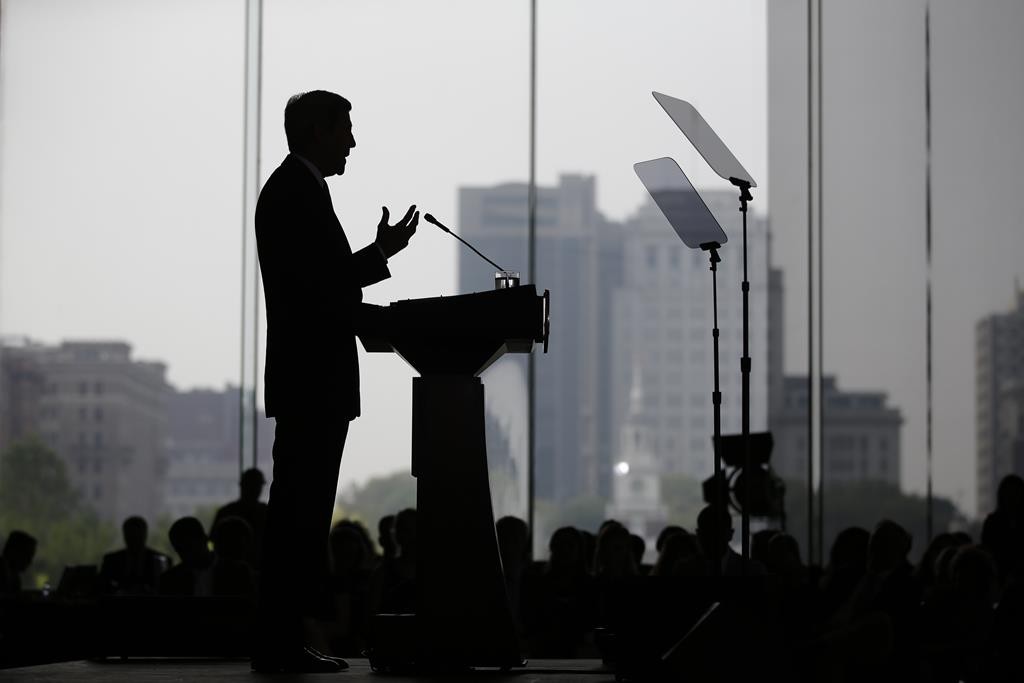 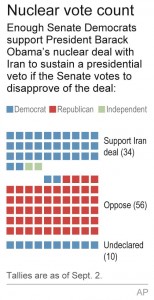 The decisive 34th commitment came from Maryland Democrat Barbara Mikulski, who is retiring next year after three decades in the Senate. In a statement she said “no deal is perfect, especially one negotiated with the Iranian regime.” But she called the pact “the best option available to block Iran from having a nuclear bomb.”

Supporters now have the votes in hand to uphold Obama’s veto, if one becomes necessary, of a resolution of disapproval Republicans are trying to pass this month. GOP lawmakers who control the House and Senate ardently oppose the agreement, which curbs Iran’s nuclear program in exchange for hundreds of billions of dollars in relief from international sanctions.

Senate Majority Leader Mitch McConnell (R-Ky.) grudgingly acknowledged that his side would not be able to block the deal after Obama, in his words, secured “the tepid, restricted and partisan support of one-third of one house of Congress.” McConnell spared the accord no criticism, saying it leaves Iran “with a threshold nuclear capability.”

In Philadelphia, Secretary of State John Kerry defended the deal. “Rejecting this agreement would not be sending a signal of resolve to Iran, it would be broadcasting a message so puzzling that most people across the globe would find it impossible to comprehend,” he told lawmakers and civic leaders at the National Constitution Center. His speech was carried live on Iranian media, an unusual occurrence

White House press secretary Josh Earnest called the growing support a validation of Obama’s effort to “make sure that every member of the Senate understands exactly what’s included in the agreement.” The deal sets Iran back so that it is at least a year away from being able to produce enough nuclear material for a weapon, before the restrictions ease after a decade.

For all the geopolitical ramifications, the debate in the U.S. has often seemed more about domestic partisan politics over a resolution that, on its own, wouldn’t be able to reverse a multi-country agreement already blessed by the United Nations. A vote of disapproval, however, could signal Congress’s readiness to introduce new sanctions at the risk of causing Tehran — and other governments — to abandon the accord and blame the U.S. for the failure.

Among American lawmakers, the debate has broken along party lines. Republicans, defending their congressional majorities and aiming for the White House in next year’s elections, have denounced the deal in apocalyptic terms. The bulk of Democrats have rushed to the president’s defense.

Next week, Donald Trump and fellow presidential candidate Sen. Ted Cruz will rally outside the Capitol against the agreement, as lawmakers return from a five-week recess to begin debating it. Several GOP presidential hopefuls issued statements Wednesday vowing to undo the agreement if they are elected. “When I’m president of the United States, we will re-impose those sanctions on day one,” said Sen. Marco Rubio (R-Fla.).

In the House, the disapproval resolution is certain to pass by a wide margin when it comes to a vote next week. But in a letter to fellow Democrats Wednesday, House Minority Leader Nancy Pelosi said she has the votes to back up an Obama veto.

Supporters of the deal are seeking a bigger victory in the Senate. If they can assemble 41 votes in favor, they’d be able to block the disapproval resolution from passing at all, sparing Obama the embarrassment of having to veto it. They need seven of the remaining 10 undeclared Democrats to back the agreement, though several in this group could still come out in opposition.

Because the Obama administration didn’t consider it a treaty, ratification wasn’t dependent on two-thirds approval in the Senate. Instead, Republicans and Democrats agreed on a process that essentially allowed the pact to stand if it gained the support of just one-third of lawmakers in either chamber, since two-thirds majorities in both would be needed to override a veto of the disapproval resolution.

Only two Senate Democrats, Chuck Schumer of New York and Robert Menendez of New Jersey, have announced their opposition so far.