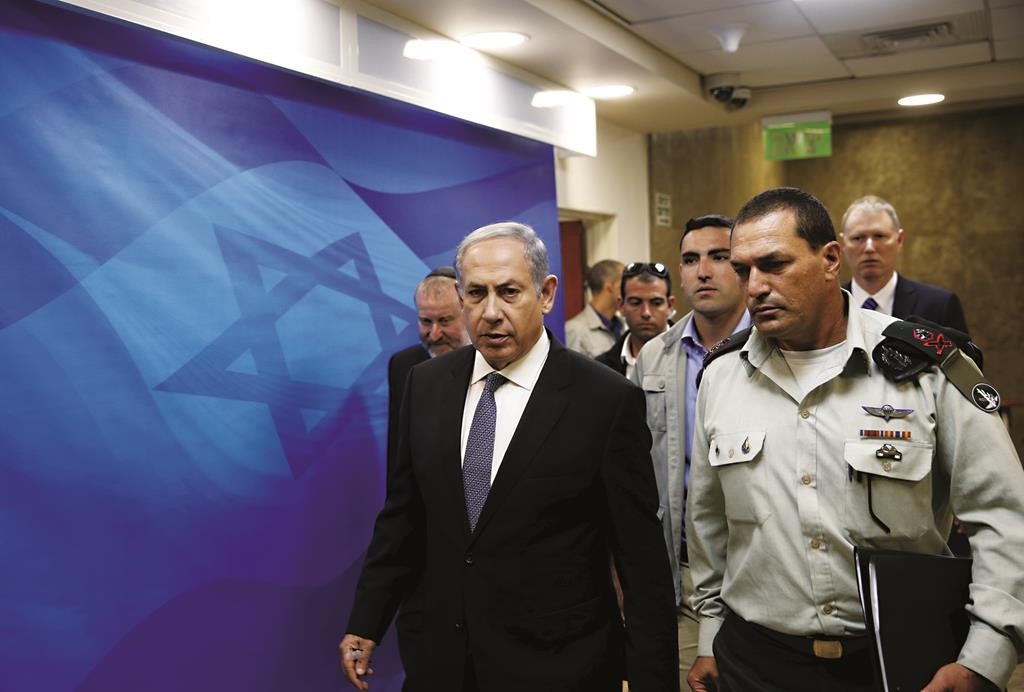 Under standing orders, Israeli soldiers facing violent Palestinian protests can open fire with live bullets only in life-threatening situations. That effectively bans firing at Palestinians who flee after hurling a rock or firebomb.

But after meeting with several cabinet ministers and security chiefs to discuss an increase in stone-throwing in Yerushalayim and on Highway 443 from the capital to Modi’in, Netanyahu suggested more robust rules of engagement.

“Since the justice system finds it difficult to deal with minors who throw rocks, changes to orders on opening fire towards stone- and firebomb-throwers will be examined,” the Prime Minister’s Office said in a statement.

It was decided at the meeting that security forces along 443 and in Yehudah and Shomron will be increased. At the same time, two additional border patrol squadrons will be sent to the capital, as well as another 400 police.

In particular, security around the Yerushalayim Light Rail was tightened on Tuesday night, following a terrorist alert in the northern part of the city, especially in Shuafat.

While tougher action against Palestinian stone-throwers would likely draw international concern, Netanyahu’s government and the military have been facing calls from Israeli leaders in Yehudah and Shomron for a security crackdown.

Those demands mounted after a video last week that showed an Israeli soldier being hit and bitten by relatives of a Palestinian boy who was throwing rocks at the soldier and whom the soldier placed under arrest. On Israeli social media, many asked why the infantryman had not fought back or even used his assault rifle.

In July, the Knesset imposed tougher penalties of up to 20 years in prison for people throwing rocks at vehicles after a wave of Palestinian riots in east Yerushalayim.

Since 2011, three Israelis, including a baby and a young girl, have been killed in Yehudah and Shomron after rocks were thrown at vehicles they were travelling in.

Meanwhile, Zionist Camp threw its support behind Justice Minister Ayelet Shaked’s anti-terrorism bill on Wednesday, which will give authorities more latitude in combating the threat.

The bill in question, initially proposed by MK Tzipi Livni (Zionist Camp) when she was Justice Minister in the last government, was expected to pass easily in a vote scheduled for the Knesset on Wednesday night, The Jerusalem Post reported.

If enacted, it will enable courts to convict terrorists based on admissions made during interrogation, not only their testimony in court.

The new law will also extend the length of time during which terrorists can be barred from meeting their lawyers. While most criminals can be prevented from meeting an attorney for up to 30 days, this would give the attorney general discretionary power to extend that period for a terrorism suspect.

The restriction aims at preventing a lawyer for alleged terrorists from coordinating his clients’ testimonies.