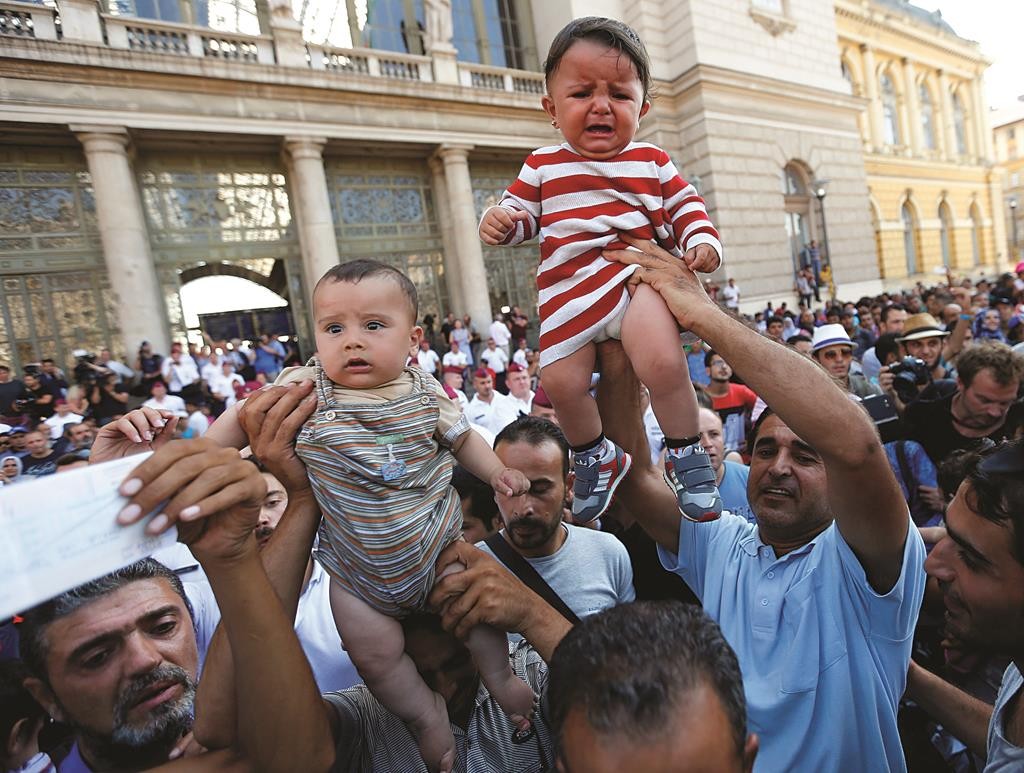 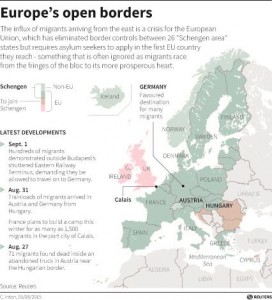 Chanting “Freedom! Freedom!,” angry migrants demanded to be let aboard trains bound for Austria and Germany after Hungary temporarily suspended all rail traffic Tuesday from its main Budapest terminal and brawny police forced hundreds of migrants out of the train station.

Chaos enveloped the city’s Keleti station. Forced into the midday sun, scores of migrants protested for hours, waving newly purchased train tickets angrily in the air. The official U-turn surprised observers, given that Hungary over the weekend had started to allow migrants to travel by train to the west without going through asylum procedures.

Janos Lazar, chief of staff to Prime Minister Viktor Orban, told lawmakers that Hungary disagreed with Germany’s openness to taking refugees from war-torn Syria. He blamed Germany and what he called other “left-wing governments” in Europe for encouraging the rush of migrants that has staggered Hungary both on its borders at in its capital city.

“The defense of our borders is important, not opening the borders,” he said.

“If you deny them — although they have a paid ticket — and you don’t let them get on board, you push them right into the hands of smugglers,” William Lacy Swing, director general of the International Organization for Migration, told The Associated Press. “So they get into vans and into trucks and they die.”

German Chancellor Angela Merkel rejected Hungary’s criticism of German asylum policy, saying her country was offering the same welcome to people fleeing war in Syria that all members of the 28-nation EU, including Hungary, should provide.

Speaking in Berlin, Merkel said Germany shouldn’t be expected to take the lion’s share of Syrian refugees and appealed to EU partners to volunteer to take more. Germany expects to take in 800,000 asylum seekers this year, compared to under 3,000 for fellow EU member Spain.

Merkel said Germany typically did give refugee protection to Syrian citizens fleeing the country’s four-year-old war. “That should come as no surprise. Actually, it should be the same in every European country,” she said.

European nations say more than 332,000 migrants have arrived already this year. The front-line border nations of Greece, Italy and Hungary, as well as non-EU members Serbia and Macedonia, have been overwhelmed by the thousands surging across their border. More than 2,600 migrants have also drowned this year as they attempted to cross the Mediterranean in smugglers’ often-unseaworthy boats.

Scuffles broke out Tuesday morning at Budapest’s Keleti station as hundreds of migrants pushed toward the metal gates where a train was scheduled to leave for Vienna and Munich, only to be blocked by police.

Authorities announced over loudspeakers that all trains would be stopped indefinitely from leaving. Migrants’ papers were checked, and those with train tickets but no EU visas were ushered out of the station.

Outside, hundreds who had spent heavily on the tickets chanted “Germany!” and “U.N.!” But Hungary’s national rail company, Mav, said it no longer would sell train tickets to customers who could not present proper ID and, where required, visas. It said customers would be allowed to buy only tickets for themselves, not multiple purchases.

The train tensions were matched by highway delays as Austrian authorities reimposed border controls at main crossings from Hungary. Vehicles at the Hegyeshalom crossing on the main highway from Budapest to Vienna faced four-mile traffic jams at one point Tuesday because of the Austrian inspections.