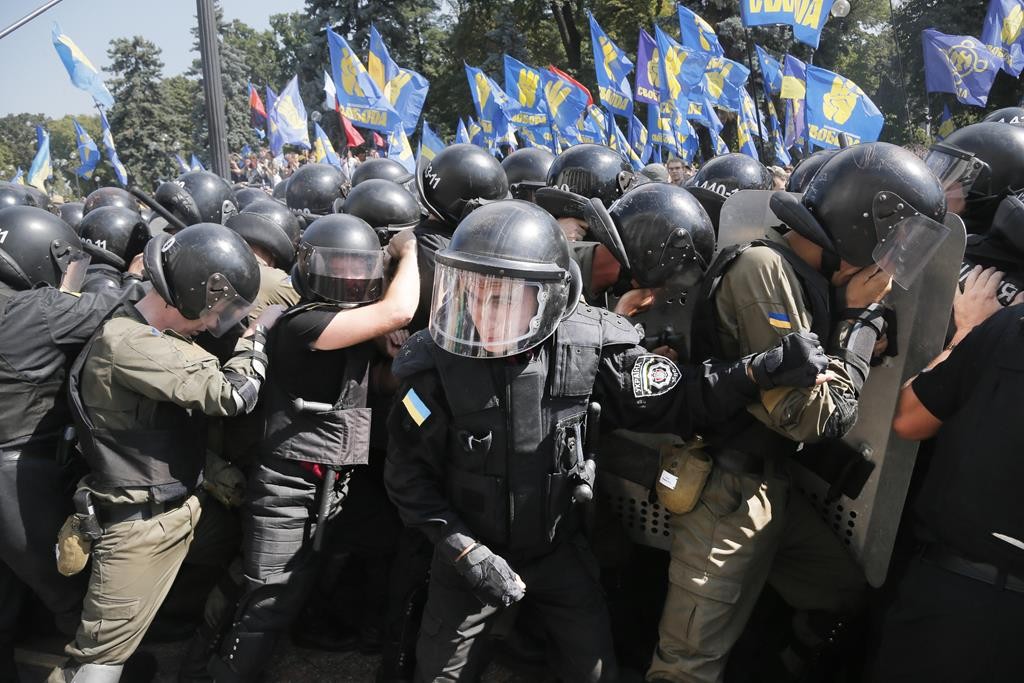 As lawmakers took up a measure to give greater powers to separatists in eastern Ukraine, nationalist protesters clashed with police outside parliament on Monday, and the Interior Ministry said one officer was killed in a grenade blast and more than 100 were wounded.

It was the worst violence in the capital since the government took power in February 2014.

The decentralization of power was a condition demanded by Russia for a truce signed in Minsk in February aimed at ending the fighting between Ukrainian government troops and Russia-backed separatists that has left more than 6,800 dead since April 2014.

But Ukrainian nationalists strongly oppose changing the constitution, saying that would threaten the country’s sovereignty and independence.

In an address, Ukrainian President Petro Poroshenko called decentralization “a difficult but a logical step toward peace,” and insisted that it would not grant autonomy to the rebels in Donetsk and Luhansk.

The measure won preliminary approval on Monday with 265 deputies in the 450-seat parliament voting for it.

But three parties that are part of the majority coalition in parliament refused to give their support, showing the difficulty that Poroshenko faces even within his own pro-Western camp in fulfilling the peace agreement.

When the decentralization bill comes up for final approval, he will need to get at least 300 votes as required for amending the constitution.

The officer who was killed in the clashes on Monday was a 25-year-old conscript, Interior Minister Arsen Avakov told reporters. He said 122 people were hospitalized — most of them officers, but also some Ukrainian journalists and two French reporters.

No injuries were reported among the several hundred protesters, including 100 die-hard activists, most of whom are members of Svoboda, a nationalist party that holds only a handful of seats in parliament. The protesters were carrying sticks and truncheons. Some of them were masked.

Avakov said that about 30 people have been detained, including the protester who threw the grenade, who he identified as a Svoboda member who fought in the east in one of the volunteer battalions that are loosely controlled by the government.

Poroshenko described the violence outside parliament as a “stab in the back” and pledged to prosecute “all political leaders” who were behind the clashes.