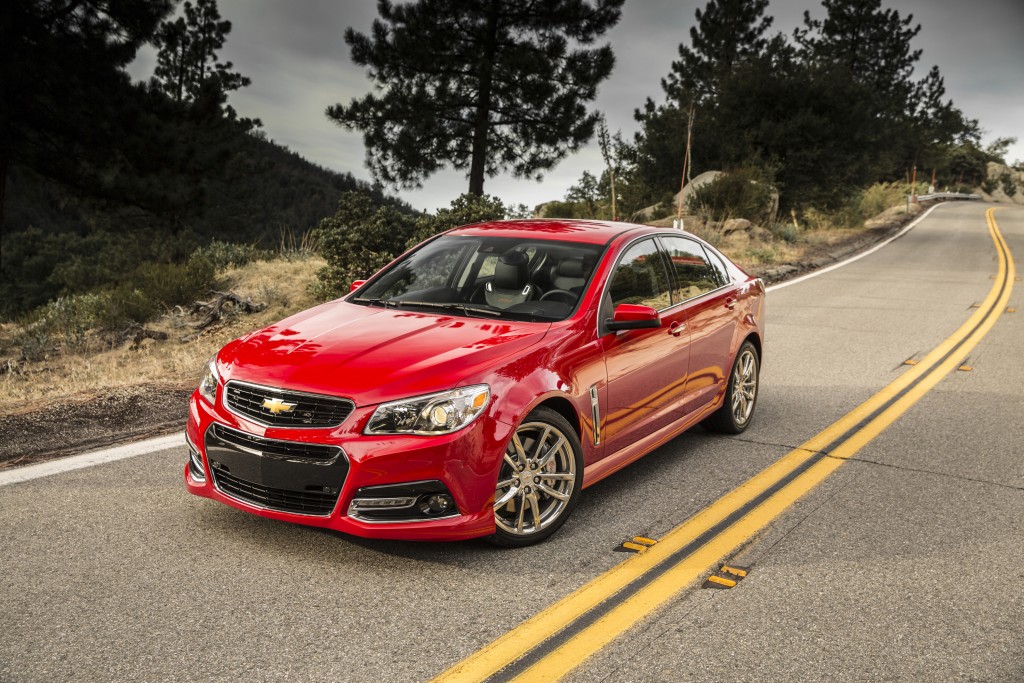 But when I climbed into the silver-green Chevrolet SS I had recently — a sweet, low-profile sleeper of a performance sedan — my jaw dropped.

In this unsettling age of digital and virtual everything, three old-school pedals and a metal-and-leather shifter knob occupy prominent spots in the SS.

Think about it: Although Ferrari doesn’t even offer manual transmissions anymore, Chevrolet managed for the first time this year to bolt a six-speed manual into a limited-production four-door sedan (1,855 sales through July, by far Chevy’s lowest-selling car).

It’s enough to make you forget about the Pontiac Aztek.

Chevrolet introduced the SS last year, a rear-wheel-drive sedan built in Australia, powered by a Corvette engine and related to the late, great Pontiac G8.

How’s that for an oddball pedigree? But it works.

Though the car has been criticized some for its resemblance to a lowly Chevy Malibu, it arrives with near muscle-car performance, crisp Euro-like handling and just enough size to fit four adults.

And .a real, row-your-own six-speed manual.

While short overhangs and a relatively low stance give the SS an athletic profile, it’s an easy car to overlook because of familiar Chevy styling cues.

A blacked-out grille, large projector headlamps and slightly raised hood give the car a pleasant — if not distinctive — face.

As you might expect in a full-size sedan, four large doors dominate the mostly smooth, taut sides of the SS, marred only by a fake plastic vent in the front fender.

Mine also had a nicely curved top and four-inch diameter exhausts in back. It crouched tightly on 245/40 tires up front and serious 275/35s in back wrapped around 19-inch, 10-spoke wheels.

I could probably live without the chrome wheels and door handles, but they do hint that there’s something special about this mostly subtle, muscular sedan.

Just fire it up for confirmation.

The Corvette-derived 6.2-liter V-8 settles into a rumbling, slightly lumpy idle that states clearly this is no four-cylinder, kid-carting Malibu.

In fact, chocolate should be prohibited in all SS sedans, I think.

By the way, the clutch was light and fairly abrupt, requiring a few shifts before you get fully acclimated. Also, the linkage on the six-speed could occasionally be notchy.

Give it an hour and you’ll be fine. The 6.2 is strong and forgiving, cranking out big, torquey surges all the way to 6,000 rpm.

It also happily pops and spits under sudden deceleration and can chirp the rear tires in third gear if you’re having a delinquent day.

Just don’t expect miracles in the gas tank. The car is rated at a very average 15 miles per gallon in town and 21 on the highway.

But the SS and its old-school pushrod V-8 can make haughty six-figure European sedans sweat pure wine. Unlike big American sedans of the past, the SS rides firmly on an athletic platform with independent rear suspension.

As a result, it moves with sophisticated firmness, absorbing most bumps quietly with well-damped capability.

Push it into a fast corner and the SS responds with a sort of light-footed eagerness, settling quickly into a line with little lean and good balance.

A couple of times, I, uh, inadvertently got the car to drift slightly in a really tight curve and found I could still move the well-sorted SS around with the flat-bottom steering wheel.

In fact, I thought it felt livelier and handled better than many SS Camaros I’ve driven.

Enjoy the drive. Your well-heeled friends probably won’t be much impressed with the interior, which in mine was black as night.

Just get them to focus on the seats, easily the interior’s best feature.

The seats were stitched in smooth black leather with functional, form-fitting bolsters and perforated centers.

The plastic dashboard, meanwhile, was mostly flat on top with a large center stack and prominent display screen up high. Everything sort of wrapped around the front seats cockpit-style, with real knobs for the audio and climate-control systems that could be easily adjusted while driving.

(Did you hear that, Mercedes-Benz, BMW, Cadillac and Audi?)

In addition, a knob on the console was used to select among tour, sport and race settings for the suspension. (I found sport to be the best compromise.)

More plastic awaits you on the door panels, trimmed in black suede with piano black around the window controls.

Though the SS doesn’t look particularly big, legroom and headroom are pretty good.