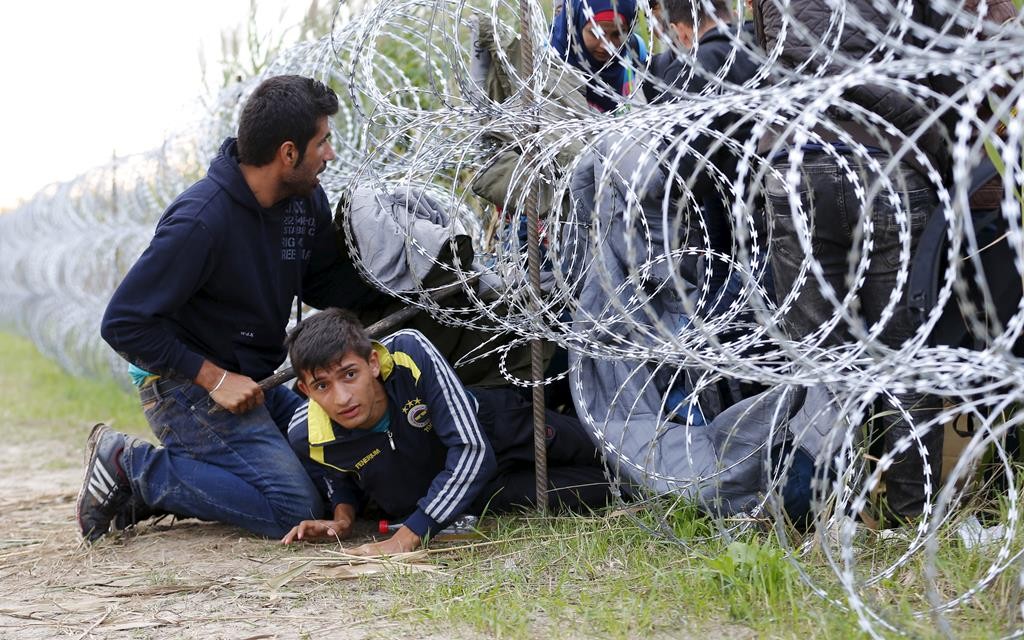 Hungary made plans on Wednesday to reinforce its southern border with helicopters, mounted police and dogs, and was also considering using the army as record numbers of migrants, many of them Syrian refugees, passed through coils of razor-wire into Europe.

In Germany, which expects to receive 800,000 of them this year, Chancellor Angela Merkel was heckled by dozens of protesters as she visited an eastern town where violent anti-refugee protests erupted at the weekend.

The surge in migrants seeking refuge from conflict or poverty in the Middle East, Africa and Asia has confronted Europe with its worst refugee crisis since World War Two, stirring social tensions and testing the resources and solidarity of the 28-nation European Union.

A record 2,533 mainly Syrians, Afghans and Pakistanis crossed from Serbia into EU member Hungary on Tuesday, climbing over or squirreling under a razor-wire barrier into the hands of an over-stretched police force that struggled to fingerprint and process them. Authorities said over 140,000 had been caught entering so far this year.

Unrest flared briefly at a crowded reception center in the border region of Roszke, with tear gas fired by police.

Another 1,300 were detained on Wednesday morning. More will have passed unnoticed, walking through gaps in a border fence being built by Hungary in what critics say is a futile attempt to keep them out. They packed a train station in the capital, Budapest, hundreds of men, women and children sleeping or sitting on the floor in a designated “transit zone” for migrants.

Almost all hope to reach the more affluent countries of northern and western Europe such as Germany and Sweden.

Hungary, which is part of Europe’s Schengen passport-free travel zone, is building a fence along its 110-mile border with Serbia, taking a hard line on what right-wing Prime Minister Viktor Orban says is a threat to European security, prosperity and identity.

Government spokesman Zoltan Kovacs said parliament would debate next week whether to employ the army in the border effort.

The numbers traveling through the cash-strapped Balkans have soared in recent weeks, with 3,000 crossing into Macedonia daily from Greece.