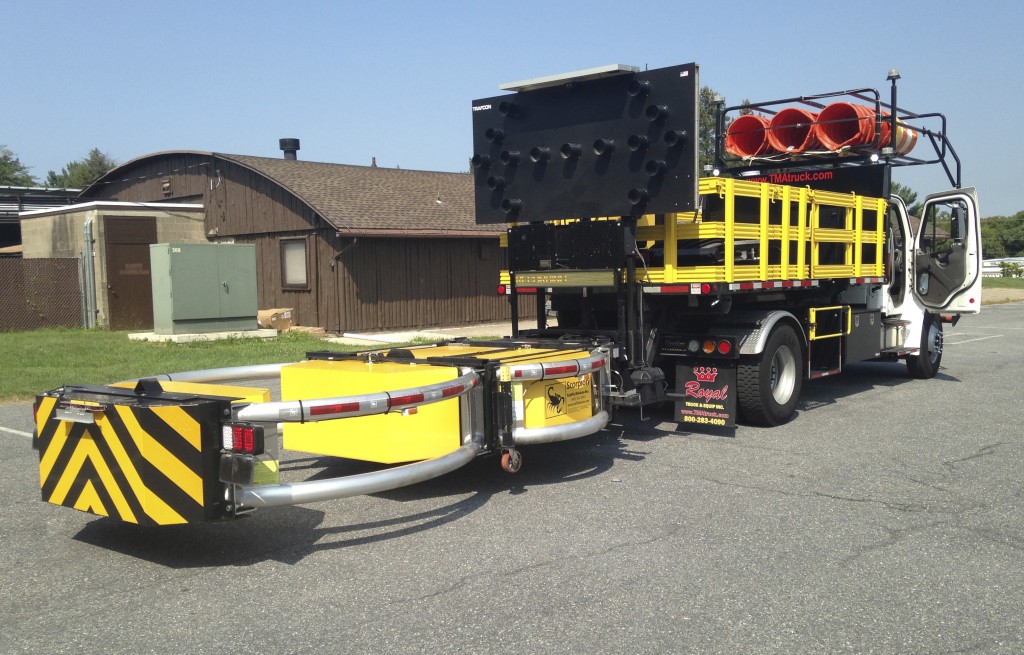 Roving construction crews – the kind you see blacktopping a road, painting lines, inspecting a bridge or installing a traffic signal – are often protected from oncoming traffic by a specialized truck outfitted with a crash barrier.

The crash trucks, fitted with a device called a truck-mounted attenuator, have been credited with saving lives. But the workers who drive them are inevitably placed in harm’s way, “literally waiting to be struck,” said Robert Roy, president of Royal Truck & Equipment Inc. in Coopersburg, Pa.

Royal recently demonstrated its new driverless crash truck that it hopes will one day improve safety at work zones around the country. Two of the autonomous vehicles will make their debut at highway construction sites in Florida by the end of the year under a state Department of Transportation demonstration program.

“Any time a driver can be removed from these vehicles in a very dangerous situation, and if the vehicle’s struck, there’s nobody inside of it to receive the damage or the injuries, that’s measuring success,” Roy said.

Truck-mounted attenuators have been around for 30 years. One study, published this year in the Journal of the Transportation Research Board, found that they cut work-zone injuries and fatalities from rear-end crashes nearly in half.

There is considerable interest in autonomous truck-mounted attenuators, both for their potential to reduce risk and as a way to save on labor costs, one of the study’s authors, Gerald Ullman of Texas A&M’s Transportation Institute, said.

“Connected and autonomous vehicles in general are viewed as the future of surface transportation, and this technology may be one of the first ways in which it gets commercialized,” he said.

Google and traditional car companies have been developing self-driving vehicles, while Daimler Trucks North America LLC recently demonstrated the first self-driving tractor-trailer to be licensed on public roads. Daimler said it would be years before a self-driving truck hits the market.

In the recent demonstration, a lead truck beamed information to Royal’s attenuator truck. The crash truck followed the lead truck around the parking lot of Bethlehem’s municipal swimming pool, perfectly mimicking its movements, speed and braking.

Royal, the nation’s largest manufacturer of truck-mounted attenuators, is partnering on the driverless crash trucks with Micro Systems Inc. of Fort Walton Beach, Florida, which supplies unmanned vehicles to the military and developed the technology.

Royal said the terms of the agreement with Florida’s transportation department are still being negotiated.