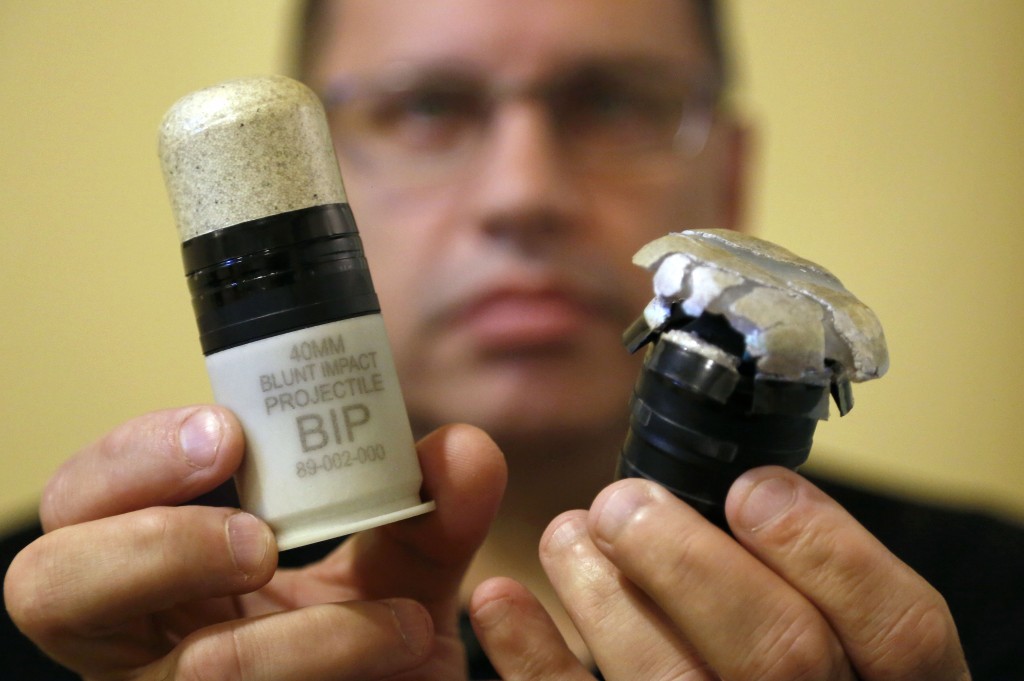 Police in more than 20 North American cities are testing the latest in less-lethal alternatives to bullets – “blunt impact projectiles” that cause suspects excruciating pain but stop short of killing them. Or at least that’s the goal.

Police have long had what they considered “nonlethal” weapons at their disposal, including pepper spray, stun guns and beanbag projectiles. But even those weapons have caused deaths, leading to a search for “less lethal” alternatives. The quest has taken on new urgency in the past year amid furor over a string of high-profile police shootings of black men.

Micron Products Inc., based in Fitchburg, makes the new ammunition, which are much larger than rubber bullets and have silicone heads that expand and flatten on impact, enhancing the pain and incapacitating a suspect. One executive of the company that patented the technology was a guinea pig and described experiencing the business end of a BIP as the “equivalent of being hit by a hockey puck.”

“It was like, ‘Ow!’ I had to shake it off,” said Allen Ezer, executive vice president of Security Devices International, a defense technology company that hired Micron to make the projectiles, which were developed by a ballistics engineering company in Israel.

Sixteen law-enforcement agencies in the U.S. and six in Canada have purchased the projectiles, including SWAT units of the Los Angeles County and Sacramento County Sheriff’s Departments in California, and police departments in East Hartford, Connecticut; Sioux Falls, South Dakota; and Los Alamos, New Mexico.

“They want an option that bridges the gap between baton, Taser and their service weapons,” said Salvatore Emma, Micron’s chief executive officer.

The projectiles do not penetrate the skin, like conventional bullets, but they do cause pain and discomfort. Officers are trained to shoot the projectiles at arms and legs. A person hit in the torso at close range during a disturbance in Canada got a large bruise but no lasting injury, said Gregory Sullivan, SDI’s chief executive officer.

No one has been shot in the head with the projectiles at this point, and Sullivan acknowledged the possibility of a serious or deadly injury in the event of a close-range shot to the head.

But “because of the accountability factor that exists today in the law-enforcement field … it just makes good sense and good risk-management to use something that’s safer and the officers can have confidence in,” said Sullivan, a former Toronto police officer.

The product has its limits. While it could subdue an armed suspect from a distance in a hostage or standoff situation, it probably wouldn’t be useful during sudden confrontations, said Toby Wishard, sheriff in Codington County, South Dakota, whose department bought the projectiles several months ago but hasn’t used them yet.

“This product is not practical to carry on a belt. You’d have to have the time to get it into place; then the opportunity would have to present itself for you to use it,” Wishard said. “I look at it as more of a specialized tool.”

The projectiles, with an average price of $25, carry a variety of payloads, including a powder used in pepper spray, marker rounds used to identify riot agitators and a malodorant that smells like sewage.

Other companies are also marketing less-lethal alternatives, including:

– A 12-gauge, two-shot launcher pistol that can fire beanbags, pepper spray and gas pellets, made by Bruzer Less Lethal International, in Elkhart, Indiana. The product has drawn interest because it is smaller than a shotgun and can be used to force inmates out of a cell or suspects out of a car. “It’s like wasp-spraying; you hit the nest and the bees or the wasps come out,” said company founder Tommy Teach.

– A gun attachment that slows down bullets, maintaining enough force to knock someone down but reducing the potential for death, made by Alternative Ballistics, a company outside San Diego.

Critics argue the alternatives are merely a stopgap to a much bigger problem.

“I’m for less militarization of the police, but the main problem and the main deterrent for these different incidents of police violence is holding the police accountable,” said Brock Satter, an organizer for Boston-based Mass Action Against Police Brutality.

“I don’t think most of these situations are accidents. These are incidents of abuse of power and racism,” he said. “To me, that’s not a problem you can solve just by using a different weapon.”