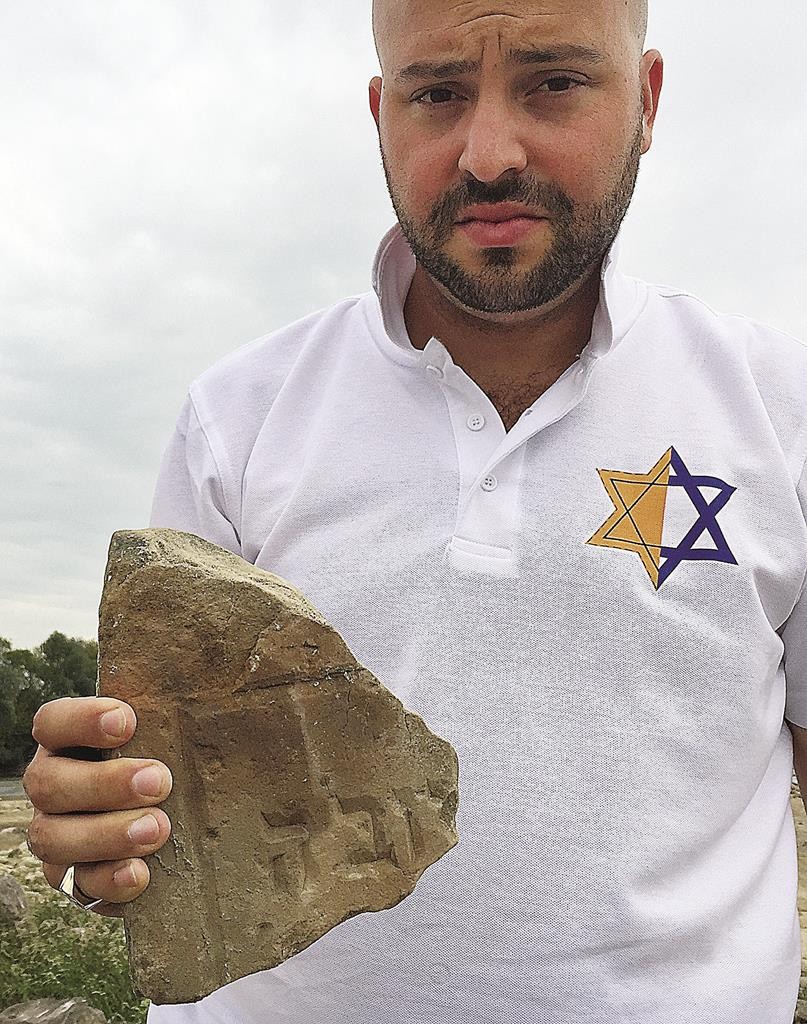 As Polish river levels fell to record lows during a prolonged drought, the newly exposed riverbeds revealed the remains of many Jewish tombstones. Other remnants of Poland’s tortured 20th-century history have also come to light, with the remains of Soviet fighter pilots and their plane being found in recent days.

Those discoveries follow that of stone fragments from the early 20th-century Poniatowski Bridge across the Vistula River in Warsaw, which the Germans blew up in 1944 as they crushed the Warsaw Ghetto Uprising.

“The Germans used them for building material to strengthen the river banks,” Poland’s Chief Rabbi, Rabbi Michael Schudrich, told Hamodia. “Unfortunately, this has happened dozens of times. It’s terrible every time we come across it, but we’ve found them in towers in bridges; once in a pigsty.”

Rabbi Schudrich said that the presence of the tombstones in the river was known. Efforts have been made to rescue some of the monuments, but the difficulty and cost greatly limited what could be done.

He said that in past cases, with the help of local authorities, the salvageable stones were brought to the cemetery from which they were suspected to have come. Rabbi Schudrich added that if relocated, he generally encourages headstones to be placed in a designated area or built into the wall raised above the ground, but not planted vertically.

“To stand them up, you would have to dig to make a foundation and that could disturb atzamos [bones] that are there … it also says po nitman [here lies], which would not be accurate in these cases. It makes things unclear,” he said.

The matzeivos  found in Warsaw are believed to come from the Brodno cemetery in Warsaw’s Praga district, the resting place of an estimated 300,000 Jews. Today, only between three and four thousand of the original tombstones remain. The vast majority were removed by both Nazi and Communist regimes. A wall currently exists, although Rabbi Schudrich said that its boundaries are inaccurate and a road cuts through part of the site. Brodno was placed under the auspices of Warsaw’s Jewish community several years ago.

Monika Krawczyk, CEO of the Foundation for the Preservation of Jewish Heritage in Poland, known as FODZ, told Hamodia that the stones would most likely be returned to the cemetery. She said that in similar situations local people were generally “sensitive” to the situation and contacted the nearest existing Jewish community, but that transportation costs were often a challenge.

“It is quite important that all findings be recorded,” she said. “These matzeivos are unique remnants of history that now have a chance to be brought back to a cemetery. We are constantly contacted by survivors trying to find where their familes are buried. This gives one more chance to connect them with where they originate from.”

Mrs. Krawczyk also hoped that the salvageable stones would be returned to Brodno, but lamented a lack of support from Polish authorities in restoring the site. She said that since the opening of the multi-million-dollar Jewish history museum in Warsaw this past fall, the government “feels that it has solved all the problems of Jewish heritage.”

“The Vistula River is hiding no end of secrets. They are everywhere,” says Jonny Daniels, head of the Jewish foundation From the Depths, who waded into a shallow part of the Vistula on Tuesday, picking up fragments of stones with Hebrew lettering.

Two weeks ago, a man walking along the river in Warsaw came across fragments of the tombstones bearing Hebrew lettering; he took Daniels there on Tuesday. In the meantime, some fragments had already been removed, though a few were still lying on the riverbed. Now Daniels hopes to take students there to do a more thorough search and return to the cemetery anything he can find.

The Vistula cuts through central Warsaw and the area where the monuments have become exposed is a busy area lined with restaurants and bicycle and pedestrian paths.

On Sunday, searchers found the remnants of a Soviet fighter-bomber plane in the Bzura River, a tributary of the Vistula, near the village of Kamion in central Poland.

The head of the museum to which the artifacts were brought for analysis, Zdzislaw Leszczynski, told the Associated Press that parts of Soviet uniforms, a parachute, a sheepskin-coat collar, parts of boots, a pilot’s personal TT pistol and radio equipment were found, along with a lot of heavy ammunition.

Russian Embassy spokeswoman Valeria Perzhinskaya said she considers the discovery important and believes the crew could be identified by the numbers on the wreckage and could be properly buried. About 600,000 Soviet troops were killed fighting the German army on Polish territory.

In addition to the tombstones and Soviet plane, other artifacts from the region’s history have become exposed, including stonework from the 17th century, dropped accidentally into the river by invading Swedish armies attempting to carry it back to their homeland.

Rabbi Schudrich said the discussion now beginning over what to do about the discovery highlights a common tension faced by Poland’s present-day Jewish community.

“There are 1,200 Jewish cemeteries in Poland today, and in 1939 there were a lot more,” he said. “We have 10,000 Jews here now and a struggling community. We have many baalei teshuvah and people who are discovering Judaism, but at the same time, the tremendous responsibility to preserve heritage is still there. It’s a major challenge.”

(With reporting from the Associated Press.)