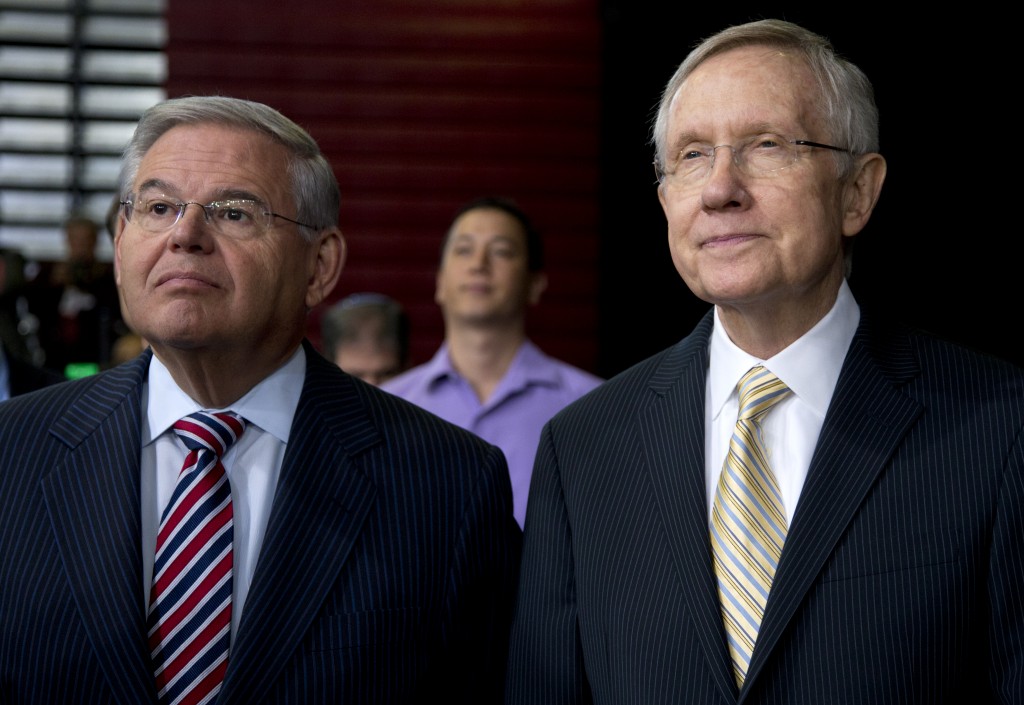 A drive to end the four-decade ban on U.S. oil exports gained a measure of support from two Senate critics of the energy industry, although any relief from Congress isn’t likely to come swiftly.

Sen. Harry Reid, the Democratic leader who has pushed to repeal billions of dollars in industry tax breaks, last week said there’s room to compromise on the issue. And Sen. Bob Menendez, a New Jersey Democrat, indicated he’d back the “strategic export” of oil to allies as a political tool.

McKenna and other analysts say that while export supporters have recently made gains, lawmakers aren’t likely to settle the issue before the 2016 election.

Oil companies including Continental Resources Inc. and ConocoPhillips have spent a year pressing Congress to change the export policy, enacted in response to supply shortages during the Arab oil embargo in 1973.

The debate is being fueled by the sharp increase in U.S. production and a global glut that pushed oil prices below $45 a barrel, which has spurred lobbying.

Last year, U.S. drillers pumped the most crude since the early 1970s, before the restrictions took effect. Imports fell to their lowest level since 1995, though the U.S. still buys about 5 million barrels a day from other countries, or a third of total U.S. petroleum supply, according to the U.S. Energy Information Administration, which tracks and analyzes data.

The comments by Reid and Menendez break from the party’s general opposition to allowing exports. On July 30, on a party-line vote, the Senate Energy and Natural Resources Committee advanced legislation to repeal the restrictions. No Democrats backed the measure.

The Obama administration is gradually letting producers ship lightly processed condensate, a form of light oil. Last week, the U.S. approved the swap of 100,000 barrels of U.S.-produced crude for similar quantities of heavy oil from Mexico.

But the industry, which has shed thousands of jobs as prices fall, is seeking unfettered exports to let the market operate more efficiently and give U.S. companies access to the slightly higher global crude prices.

Reid, among the oil industry’s most withering critics in Congress, told Washington-based publication Politico that lawmakers have to “work out some sort of compromise” on the issue.

Menendez was one of 13 Senate Democrats who wrote to President Barack Obama in June to say consumers would be hurt by U.S. exports of oil. In a speech Aug. 18 announcing his opposition to the Iran nuclear deal, Menendez said some exports should be allowed to allies “struggling with supply because Iranian oil remains off the market.”

Tricia Enright, a spokeswoman, said Menendez still backs the restrictions on exports generally. “This was used as a sweetener to alleviate allies’ concerns regarding higher energy prices should sanctions be snapped back into place,” she said.

Industry supporters noted Menendez acknowledged exports could be a geopolitical tool, a point they’ve pressed with the prospect that Iranian oil producers could soon sell their oil on the global market while U.S. companies are constrained.

“Providing our allies and trading partners with a reliable and stable alternative to Iranian and Russian crude is in our national interest and enhances our national security,” George Baker, executive director of Producers for American Crude Oil Exports, said in an e-mail.

Baker said the group was optimistic that Congress will vote to lift the export ban by the end of the year.

But other energy analysts and lobbyists said it remained a long shot.

Kevin Book, co-founder of ClearView Energy Partners, an energy research firm based in Washington, said Republicans who control Congress are unlikely to make a deal with Democrats and advance their proposals to repeal oil-industry tax breaks or a long-term extension of credits for renewable energy like wind and solar power.

“The bargains being bandied about don’t sound like deals Republican leadership is likely to accept if they think they can do better in 2017,” when a new president takes office, Book said in an e-mail.

His firm puts the odds of action before the 2016 election at 15 percent.