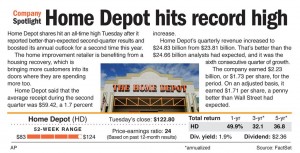 The U.S. stock market shuffled to a slight loss in a lazy day of summer trading Tuesday.

Wal-Mart’s shares slid after the retailer cut its profit forecast for the year, while renewed concerns over the strength of China’s economy weighed on companies that depend on customers there.

But the broader market looked aimless. The major indexes headed lower at the opening of trading, turned higher just before lunchtime, then slowly lost ground throughout the afternoon.

Another reason for the markets’ recent drift, Paulsen said, is that the news hasn’t been all that surprising. “People know about China’s problems, they know about falling commodity prices,” he said. “They’ve digested a lot of the news that’s out there already.”

In other trading, Wal-Mart fell 3 percent after warning that its annual profit will likely fall short of previous estimates, partly because of a strong dollar. The world’s largest retailer also reported a drop in quarterly earnings as it spent more on wages and overhauling U.S. stores. Shares slid $2.43 to $69.48.

Other retailers fared better. TJX, the company behind T.J. Maxx, reported rising earnings and sales and raised its estimate for annual profit. The news shot its stock up $5.17, or 7 percent, to $76.78, the biggest gain in the S&P 500.

Overseas, China’s main Shanghai stock index took another plunge, losing 6 percent. It was the index’s largest one-day drop since an 8 percent dive on July 27 and happened even though Beijing banned major shareholders from selling stocks.

“All the news out of China recently has done nothing to restore confidence in its financial markets,” said David Madden, market analyst at IG, “and the ripple effect can be felt in Europe.”

Back in the U.S., Lennar, D.R. Horton and other companies in the housing market jumped following news that builders started work on single-family homes at the fastest pace since 2007.

Government bond prices dipped, nudging the yield on the 10-year Treasury note up to 2.19 percent.

The price of oil inched above its recent six-year low, though analysts expect the supply glut that has pushed prices lower to persist. U.S. crude rose 75 cents to close at $42.62 in New York. Brent crude for October delivery, an international benchmark, rose 7 cents to close at $48.81 in London.