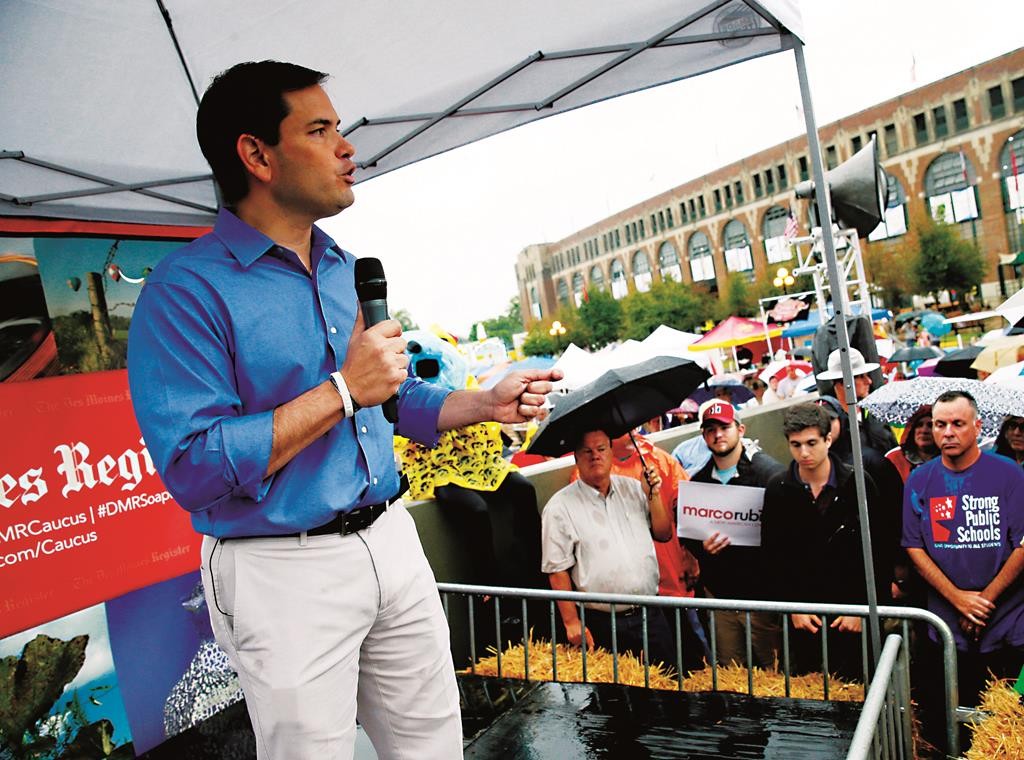 Republican presidential candidate Marco Rubio said Tuesday that he disagrees with the call his party’s front-runner, Donald Trump, made for ending the practice of automatically granting citizenship to children born in this country, even if their parents are not here legally.

“I don’t agree with that,” the Florida senator told reporters on at the Iowa State Fair when asked about Trump’s opposition to birthright citizenship. “I’m open to doing things that prevent people who deliberately come to the U.S. for purposes of taking advantage of the 14th Amendment, but I’m not in favor of repealing it.”

The senator’s answer on the topic was more direct than those offered Monday at the fair by Wisconsin Gov. Scott Walker, another GOP presidential candidate.

Appearing with Iowa’s senior senator, Republican Chuck Grassley, Rubio declined to directly criticize the billionaire businessman or comment on whether he’s hurting Republicans among Hispanic voters with the detailed plan for ending illegal immigration that Trump issued earlier this week.

“Obviously, there are some ideas that have merit, but the majority of it is really not a workable plan that could ever pass Congress,” he said of the proposal that Trump released Sunday. “It’s a serious issue.”

The son of Cuban immigrants, Rubio also criticized Trump’s plan for deporting people now living in the United States illegally. “There is not a realistic way of rounding up and deporting 12 or 13 million people and our nation wouldn’t want to do that anyways,” he said.

Later at the Des Moines Register’s political soapbox, Rubio spoke for less than half of the allowed 20-minute period as a crowd stood in the rain under multi-colored umbrellas or wearing yellow ponchos with the hoods up.

He spoke primarily about foreign policy and economic issues, and didn’t address his earlier comments on immigration. He did, however, note — as he often does — that he parents were immigrants.

“America doesn’t owe me anything, but I have a debt to America I will never repay,” he told those gathered. “This is the nation that literally changed the history of my family.”

Before making his political swing through the fairgrounds, Rubio brought his family for a brief visit on Monday evening that included a ride on the bumper cars.

Asked if he agreed with President Obama’s 2007 quip that the ride is good preparation for presidential debates, Rubio noted the 17-member Republican field.

“There aren’t enough bumper cars to prepare for this debate,” he said. “There’s too many people running.”