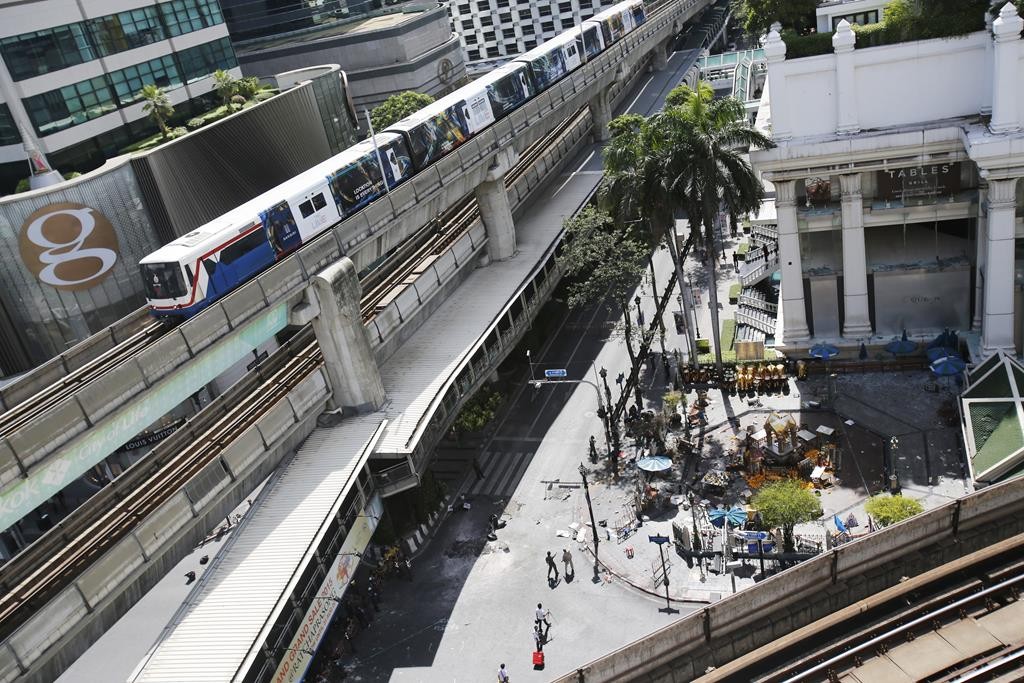 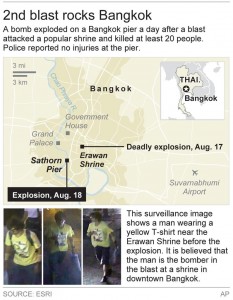 In the grainy security video, a man in a yellow shirt sits on a bench at the crowded Erawan Shrine, removes a backpack he is wearing, and leaves it behind when he walks away.

For police hunting who was responsible for Monday’s deadly bombing in central Bangkok, there was no doubt about the man with youthful shaggy dark hair and glasses.

“The yellow shirt guy is not just the suspect. He is the bomber,” police spokesman Lt. Gen. Prawut Thavornsiri told The Associated Press on Tuesday.

Prime Minister Prayuth Chan-ocha called the shrine bombing near a busy intersection that killed 20 and wounded more than 100 “the worst incident that has ever happened in Thailand,” and he promised to track down those responsible.

“There have been minor bombs or just noise, but this time they aimed for innocent lives,” Prayuth said. “They want to destroy our economy, our tourism.”

Bangkok was rattled again Tuesday when another pipe bomb blew up at the Sathorn Pier, which is used by tourists, although no one was hurt.

Prawut released several photos of the man, with and without the backpack, on social media. The images were apparently taken from closed-circuit video at the shrine before the bomb exploded.

Video posted separately on Thai media appeared to show the same man sitting on a bench at the shrine, taking off the backpack and leaving it behind as he walked away.

The bomb, which police say was made from a pipe and weighed more than 6 pounds, went off about 7 p.m. in an upscale area filled with tourists, office workers and shoppers. No one has claimed responsibility.

Prawut said Tuesday’s blast at the Sathorn Pier frequented by tourist boats also was caused by a pipe bomb and could be related to the shrine attack.

In Washington, State Department spokesman John Kirby said the U.S. is offering to support Thailand in its investigation but has not received a request. He said there was no indication that any Americans were among the casualties.

Thailand has seen many violent attacks in recent years, particularly in a more-than-decade-long insurgency by Muslim separatists that has killed over 5,000 in the country’s south. Those attacks have never reached the capital, however.

Bangkok has seen politically charged violence in the past decade; the deadliest, in 2010, killed more than 90 over two months and was centered on the same intersection where Monday’s bomb went off. But none of those attacks included a bomb that seemed intended to produce mass casualties.