Traffic Deaths Up Sharply In First Six Months of This Year 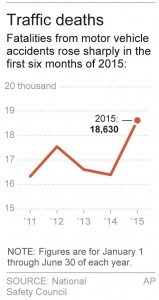 Traffic deaths were up 14 percent nationally in the first six months of this year and injuries were up by a third, according to data gathered by the National Safety Council.

An improved economy and low gas prices have encouraged Americans to put a record number of miles on the road, said Deborah A.P. Hersman, president of the council. But, she said, that’s not the whole explanation for the increase in deaths and injuries.

All told, nearly 19,000 people across the country lost their lives in traffic accidents through June, and the tally doesn’t include two of the historically highest months for traffic deaths, July and August, said the council, a nonprofit organization created by Congress to promote safety.

If the trend continues, traffic deaths this year could exceed 40,000 for the first time since 2007, when there were nearly 44,000 deaths, Hersman said in an interview. The increases began in the last quarter of 2014 and have been recorded consistently through each month of this year, Hersman said.

“As a safety professional, it’s not just disappointing but heartbreaking to see the numbers trending in the wrong direction,” she said.

In recent decades, deaths due to crashes involving drunken driving have dropped from about 50 percent of fatalities to about 30 percent, she said. Teen driving deaths are also down, and seatbelt use is up. And cars have more safety technology than ever, although drivers sometimes don’t use it or don’t know how to use it, Hersman said.

On the other hand, a growing number of states are raising speed limits, and everywhere drivers are distracted by cellphone calls and text messages.

This article appeared in print on page 3 of the August 18th, 2015 edition of Hamodia.