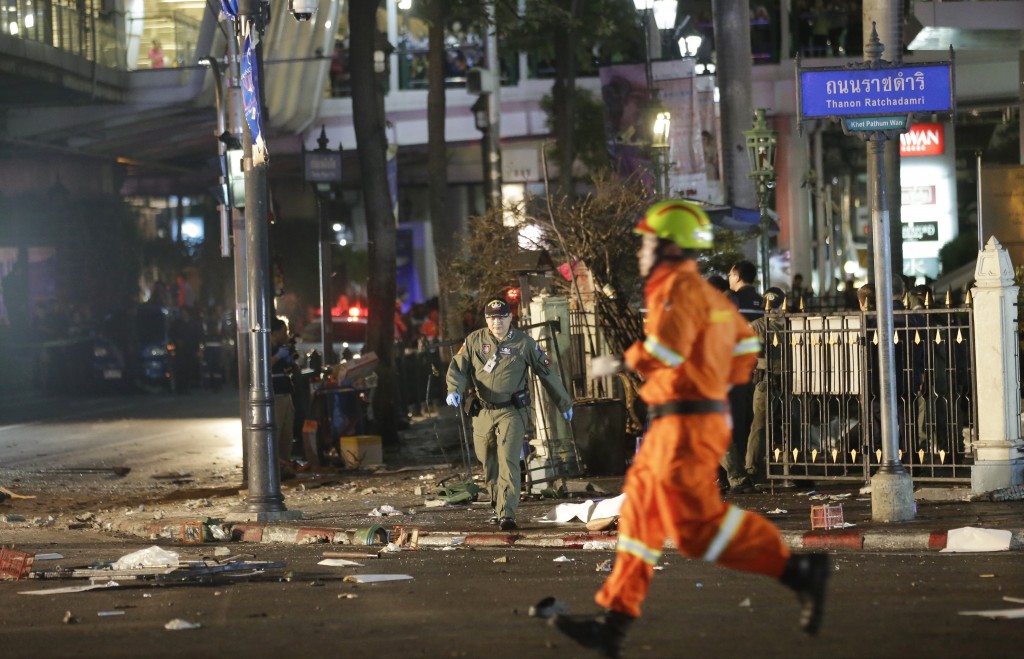 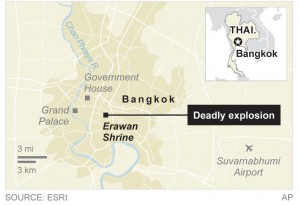 A bomb exploded Monday within a central Bangkok shrine that is among the city’s most popular tourist spots, killing at least 18 people and injuring more than 100 across a hectic intersection surrounded by five-star hotels and upscale shopping malls.

The bomb exploded during evening rush hour as the area around Erawan Shrine was filled with tourists, office workers and shoppers. The shrine is adjacent to a five-star hotel, at the intersection of two major arteries in the city.

“Suddenly there was a big boom, and the whole room just shook, like someone dropped a wrecking ball on top of our ceiling,” said Pim Niyomwan, an English instructor working on the eighth floor of the building right next to the shrine. “The whole building just shook. My four students were hysterical.”

No one immediately claimed responsibility for the bombing.

“Those who have planted this bomb are cruel,” said national police chief Somyot Poompummuang. “They aim to kill because everyone knows that at 7 p.m. the shrine is crowded with Thais and foreigners. Planting a bomb there means they want to see a lot of dead people.”

At least 18 people were confirmed dead and 117 injured, according to the Narinthorn emergency medical rescue center. The dead included Chinese and a Filipino, Somyot said.

As a single, devastating blow to this Southeast Asian metropolis, Monday’s bombing has no equal in recent history, though Thailand is no stranger to violent attacks. A more-than-decade-long insurgency by southern Muslim separatists has left more than 5,000 dead far from the capital. In Bangkok, politically charged riots centered on this very intersection in 2010 killed more than 90 over two months.

Police said the bomb was made with a pipe wrapped in cloth, and that it was too soon to determine the motive.

“We still don’t know for sure who did this and why,” Deputy Prime Minister Prawit Wongsuwon told reporters. “We are not sure if it is politically motivated, but they aim to harm our economy and we will hunt them down.”

Bangkok has been relatively peaceful since a military coup ousted a civilian government in May last year after several months of sometimes-violent political protests against the previous government. Anusit Kunakorn, secretary of the National Security Council, said Prime Minister Prayuth Chan-ocha, the former army chief who orchestrated the May 2014 coup, was closely monitoring the situation.

At the same time, the military government has tightly controlled dissent, arresting hundreds of its opponents and banning protests. Tensions have risen in recent months, with the junta making clear that it may not hold elections until 2017 and wants a constitution that will allow some type of emergency rule to take the place of an elected government.