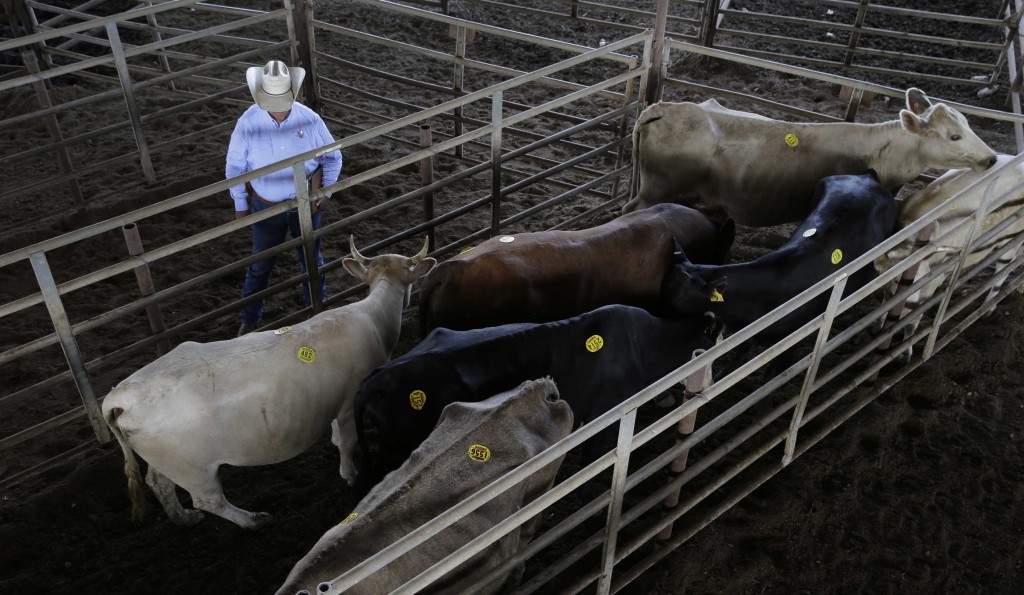 Doug Hutchison wears a badge and carries a gun, but his most effective weapon in the pursuit of livestock thieves in the nation’s largest cattle-producing territory may be his smartphone.

With it, Hutchison, one of 30 Special Rangers with the Texas and Southwestern Cattle Raisers Association, photographs suspected stolen livestock, accesses the association’s databases of livestock brands and reports of missing animals, and consults with sheriff’s offices.

“I think it’s one of the greatest tools in the world,” said Hutchison, wearing a cowboy hat and jeans, his boots mired in the mud and manure of noisy auction stockyard corrals filled with nervous cattle.

Cattle prices have been at record levels, and reports of missing or stolen cattle have followed. The nearly 5,800 livestock reported as such in Texas in 2014 was the most in five years, and the value of the animals – in excess of $5.7 million – the most in a decade.

“Any time you see the price of any commodity go up, you see the theft of that commodity rise,” says Larry Gray, executive director of law enforcement for the association founded in 1877.

There were nearly 90 million head of cattle and calves in the U.S. at the beginning of 2015, the fewest in some six decades. Texas, where drought forced ranchers to trim herds, had just under 12 million, nearly double the next-largest beef-producing states of Nebraska and Kansas.

The Special Rangers cover 76 million acres in Texas and Oklahoma. Through July this year, they’ve worked nearly 400 theft cases; they did nearly 800 in 2014. In one case last month, a Texas man was charged with theft after 544 steers worth nearly $800,000 went missing. The Kansas Attorney General’s Office has 20 open investigations.

Stealing livestock – a felony – isn’t new. Records show that the first person imprisoned at the still-unfinished Texas State Penitentiary in 1849 was a horse thief. The 21st-century rustler is more likely to be in a pickup truck, pulling a trailer.

Bruce Koger lost 14 head of cattle worth about $25,000 last month when someone cut a lock at his small ranching operation in Brazoria County, just south of Houston.

“It really takes the wind out of your sails,” he said. “It’s all I can think about. I want the rustlers more now than even the cattle back.”

“We can check statewide,” he said. “But characteristically, a lot of (offenders) don’t travel more than 100 miles. Those thieves are too lazy to work.”

Three animals attracted his attention recently at an auction in Giddings, midway between Houston and Austin. The seller wasn’t local, and one of the cows was pregnant. “That’s very unusual,” Hutchison said.

He sent photos of the cattle, which carried no brands or ear notches, to the association and contacted sheriffs’ offices. Some states mandate branding, but Texas doesn’t.

“If it (cattle) ain’t marked, you can get away with it,” says 44-year-old lifelong cowboy John Green, of Klondike. “That’s the trick.”

Green was trying to pay a bail bondsman from a previous theft case when he was nabbed last fall in northeast Texas. “I was sitting on a load of cattle on a trailer,” he said from a prison where he’s serving 10 years.

Hutchison says a lot of rustling is related to illegal drug use; Kansas and Nebraska investigators said the same.

And rustling almost always involves people with an agriculture background.

“There’s not a facet of the cattle business I don’t know,” said Carl Curry, 48, a Texas A&M University animal science graduate who has 119 years left in prison. Prosecutors said he stole more than 2,000 cattle since 2007; Curry insists he’ll be vindicated on appeal.

Some rustling cases end well. According to Gray, marked or branded cattle have “about an 80 to 85 percent chance of recovery,” while unbranded animals go “way, way down, maybe 35, 40 percent.”

The Special Rangers returned 21 calves to Brazoria County rancher Tim Wieghat a few years ago and got him restitution. “It was awesome,” Wieghat said.

But in July, someone cut locks on a pasture and stole some equipment, a crime the Special Rangers also investigate.

“We’re able to live a good life because of these cow prices,” he said. “You push yourself to give your family more, and then they come along and just take it. … It gets to the point you’re fed up.”