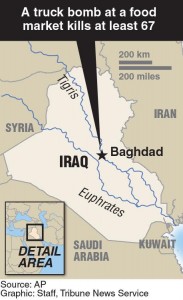 In one of the deadliest single attacks in postwar Baghdad, a truck bomb shattered a popular fruit-and-vegetable market in a teeming Shiite neighborhood Thursday, killing 67 people and wounding more than 150 others.

Terrorists from the self-described Islamic State claimed responsibility for the bombing that incinerated much of the Jameela market in the district of Sadr City.

The Sunni terrorist group, which holds about a third of Iraq and neighboring Syria, said it targeted a gathering place for Shiites and vowed more attacks. It often attacks military checkpoints or predominantly Shiite areas with the goal of undermining confidence in the government’s security efforts.

When it launched its major onslaught across northern Iraq last year, the Islamic State group vowed to continue on to Baghdad, but a mobilization of volunteer Shiite fighters deterred any significant attacks on the capital at that time.

For the past two weeks, thousands of Iraqis have staged protests calling on the government to take a firm stance against corruption and reckless spending. Many see the corruption in the security forces as a major cause for its failures.

This week, the government approved a reform plan by Prime Minister Haider al-Abadi that includes taking some money that was to go to individual officials and redirecting it to strengthening the Interior and Defense ministries.

While attacks are common in Baghdad, Thursday’s was the deadliest single bombing in the capital since the height of Iraq’s sectarian bloodletting in 2006-07.

In a message posted on an IS-affiliated Twitter account, the Islamic State said it detonated the truck bomb in order to have the “rejectionists (Shiites) experience the same harm as their bombardments cause to our Muslim people.” Islamic State, which seeks to establish a “caliphate” in Iraq and Syria, views Shiite Muslims, as well as other religious minorities, as apostates.

Sadr City, previously known as Saddam City before the 2003 U.S.-led invasion, is home to some 3 million, with most of them Shiite Muslims. The district saw some of the worst fighting in the early days of the war. In 2004, coalition troops engaged in bloody battles in Sadr City and elsewhere with members of the Mahdi Army — fighters loyal to radical Shiite cleric Muqtada al-Sadr.

A U.S.-led coalition has been bolstering Iraqi troops in their efforts to claw back territory from the terrorists for the past year. But while security forces successfully managed to recapture Saddam Hussein’s hometown of Tikrit in April, operations elsewhere have stalled as government-backed forces struggle to dislodge the extremists from Iraq’s biggest Sunni strongholds.

This article appeared in print on page 1 of the August 14th, 2015 edition of Hamodia.