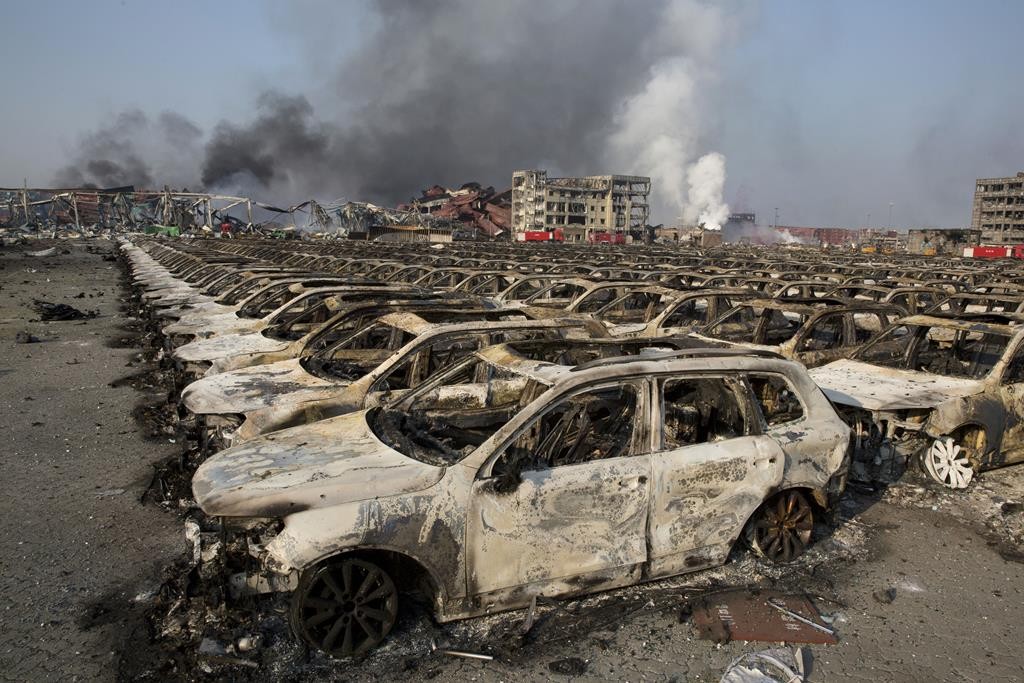 The death toll from the fiery explosions at a warehouse of hazardous chemicals climbed Thursday to 50, and the Chinese government sent experts to the shattered and smoldering port to assess any environmental dangers from the spectacular blasts.

More than 700 people were injured and dozens were reported missing in the explosions shortly before midnight Wednesday that demolished a workers’ dormitory, tossed shipping containers as if they were toy blocks and turned a fleet of 1,000 new cars into scorched metal husks. Windows were shattered for miles around by the shockwaves.

There was no indication of what caused the disaster in one of China’s busiest ports, and authorities tried to keep a tight rein over information by keeping reporters well away from the site. Social media users complained their posts about it were deleted.

More than 1,000 firefighters were sent to the mostly industrial zone in Tianjin, a petrochemical processing hub about 75 mile  east of Beijing.

Tianjin is the 10th largest port in the world by container volume, according to the World Shipping Council, and the seventh-biggest in China. It handles vast amounts of metal ore, coal, steel, cars and crude oil.

Ships carrying oil and “hazardous products” were barred from the port Thursday, the Tianjin Maritime Safety Administration said. It also said vessels were not allowed to enter the central port zone, which is near the blast site.

The municipal government, which gave the death toll of at least 50, said 701 people were injured, including 71 in serious condition. The Tianjin Port Group Co. said dozens of its employees were unaccounted for and a search is under way. Some migrant workers at the port may not be documented.

Authorities said the blasts started at the warehouse owned by Ruihai Logistics, a company that says it stores hazardous materials including flammable petrochemicals, sodium cyanide and toluene diisocyanate.

An initial explosion apparently triggered an even bigger one. The National Earthquake Bureau said the first blast was the equivalent of 3 tons of TNT, and the second 21 tons. The enormous fireballs from the blasts rolled through a nearby parking lot, turning a fleet of 1,000 new cars into scorched metal husks.

Tianjin, with a population of about 15 million, is being promoted by the Chinese government as a center for finance and high-tech industry. The Tianjin Economic Development Area has attracted foreign investors including Motorola, Toyota, Samsung and Novozymes.

The port has grown in importance as companies wanting lower manufacturing costs have migrated to the north from eastern and southern China’s manufacturing centers.

In the U.S., the White House sent its condolences, with spokesman Ned Price calling the explosions a tragedy and praising the first responders working to help the injured.