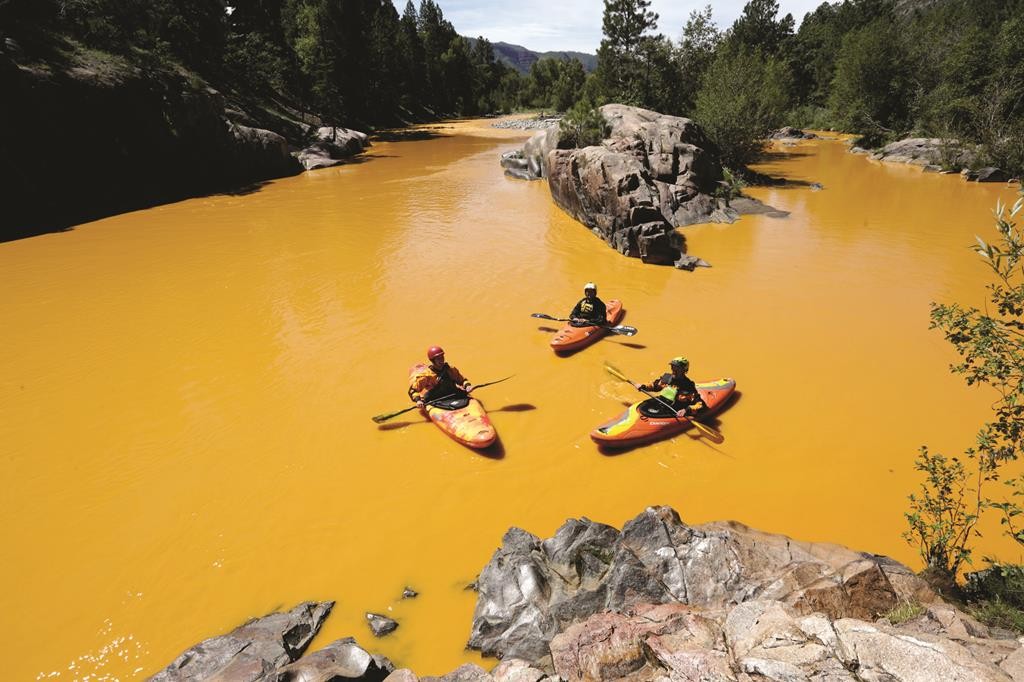 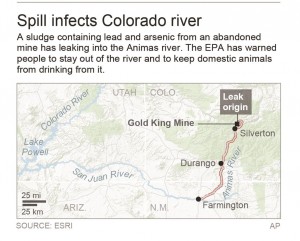 Local officials in towns downstream from where millions of gallons of mine waste spilled into a southwest Colorado river are demanding answers about possible long-term threats to the water supply.

Colorado and New Mexico declared stretches of the Animas and San Juan rivers to be disaster areas as the ochre-colored waste stream made its way downstream toward Lake Powell in Utah after the spill Wednesday at the abandoned Gold King mine near Silverton, Colorado.

The 3 million gallons of mine waste included high concentrations of arsenic, lead and other heavy metals. Workers with the EPA accidentally unleashed the spill as they inspected the abandoned mine site.

EPA officials said Monday that there was no leading edge of contamination visible in downstream sections of the San Juan River or Lake Powell. But that has done little to ease concerns or quell the anger caused by the spill.

The Navajo Nation, which covers parts of New Mexico, Utah and Arizona, declared an emergency as it shut down water intake systems and stopped diverting water from the San Juan River.

Members of the tribal council were frustrated during a special meeting Monday and echoed the sentiment of New Mexico and Utah officials that the federal government needs to be held accountable.

“We hope to work with our sister states to ensure our citizens are protected and whatever remediation is necessary occurs as quickly as possible,” Reyes said in a statement. “We will continue to evaluate the legal issues as we receive data and monitor the effects on our communities.”

Meanwhile, a spokesman for Utah Gov. Gary Herbert said the governor is disappointed in the EPA’s initial handling of the spill but the state has no plans for legal action.

The EPA has said the contaminants were rolling too fast to be an immediate health threat. Experts and federal environmental officials say they expect the river system to dilute the heavy metals before they pose a longer-term threat.

The EPA said stretches of the rivers would be closed for drinking water, recreation and other uses at least through Aug. 17.

Dissolved iron in the waste turned the long plume an alarming orange-yellow — a look familiar to old-time miners who call it “yellow boy” — so “the water appears worse aesthetically than it actually is, in terms of health,” said Ron Cohen, a civil and environmental engineering professor at the Colorado School of Mines.

Tests show some of the metals have settled to the bottom and would dissolve only if conditions became acidic, which isn’t likely, Cohen said.

The best course for the EPA would be to leave the metals where they settle, he said, noting that next spring’s mountain snowmelt would help dilute the contaminants further and flush them downstream.

No die-off of wildlife along the river has yet been detected. Federal officials say all but one of a test batch of fingerling trout deliberately exposed to the water survived over the weekend.

As a precaution, state and federal officials along the river system have ordered public water systems to turn off intake valves as the plume passes. Boaters and fishing groups have been told to avoid affected stretches of the Animas and San Juan rivers, which are crowded with rafters and anglers in a normal summer.

Recreational businesses along the rivers said they were losing thousands of dollars.

He said his company has had to cancel 20 rafting trips so far, and his dozen employees are out of work until the river is deemed safe to enter again.

“We don’t really know what the future holds yet,” said Beezley, who estimates that he’s lost about $10,000 worth of business since the spill last week. “We don’t know if the rest of this season is just scrapped.”