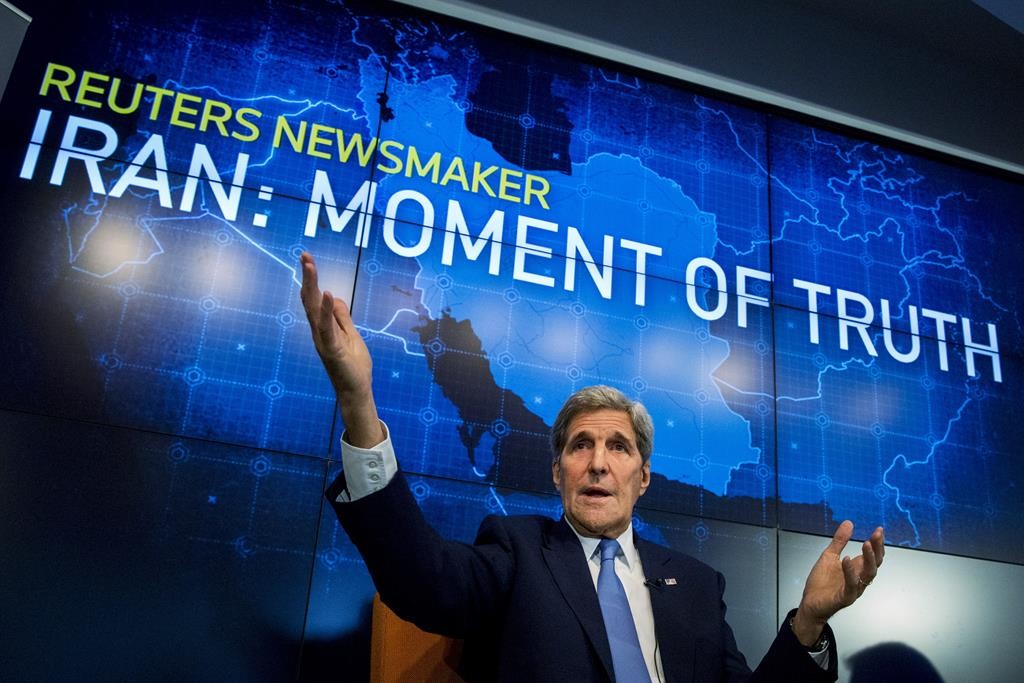 Iran’s intelligence agencies have penetrated CIA front companies, executed Western agents and captured a sophisticated U.S. drone.
So why should anyone believe American intelligence officials when they express confidence that they can monitor Iran’s compliance with the just-completed nuclear agreement?
The main reason, according to a classified joint intelligence assessment presented to Congress, is that the deal requires Iran to provide an unprecedented volume of information about nearly every aspect of its existing nuclear program, which Iran insists is peaceful. That data will make checking on compliance easier, officials say, because it will shrink Iran’s capacity to hide a covert weapons program.
“We will have far better insight [into] the industrial aspects of the Iranian nuclear program with this deal than what we have today,” James Clapper, the director of national intelligence, told an audience last month at the Aspen Security Forum.
Outside experts don’t dispute that. But they question — considering past blunders of U.S. intelligence in the Middle East — whether American spying will really be able to detect every instance of Iranian cheating.
“The intelligence community can rarely guarantee, ‘We’re going find the secret site,’” said David Albright, a former weapons inspector who heads the Institute for Science and International Security. “They have found them before in Iran and that’s good, but I think they are going to have to do more work and bolster their capabilities to find secret sites in Iran in an environment when Iran is taking counter measures against them.”
Congress is expected to vote next month on accepting or rejecting the agreement. Secretary of State John Kerry said Tuesday that if Congress rejects the deal, the U.S. won’t be able to prevent allies from doing business with Tehran. But Chuck Schumer, the only Democratic senator to publicly oppose the deal so far, said separately that that even if the U.S. backs away and other countries lift their sanctions, Iran still will feel meaningful pressure from the U.S. penalties.
The United States, Russia, China, Britain, France and Germany reached the agreement with Iran on July 14 that would curtail its nuclear program in exchange for billions of dollars in relief from economic sanctions. As part of that deal, Iran agreed to disclose nearly every element of its nuclear supply chain, including people, places, companies and infrastructure — “their entire nose-to-tail process for uranium production and processing,” as one U.S. intelligence official put it, speaking on condition of anonymity because he was not authorized to speak publicly.
Those disclosures would vastly increase the chances that intelligence agencies would catch cheating, officials told Congress in classified briefings. That’s because any illicit activity would have to take place outside the established network that had been laid bare to the West. Once the CIA knows all the places Iran has been importing and processing nuclear material, the country would have to develop new avenues to evade detection- a major undertaking. The briefings and the assessment were described by officials only on condition of anonymity.
The intelligence assessment presumes Iran will try to cheat, say officials familiar with it.
While Clapper acknowledged the arrangement wasn’t “100 percent lock-proof guaranteed,” Energy Secretary Ernest Moniz later told Congress that the “far greater insight will persist, essentially, forever.”
Even after 15 years, when restrictions on Iranian nuclear activities are lifted, Iran will still be prohibited from developing a nuclear weapon, and the U.S. will have more ability than it does now to detect any attempt, officials insist.
Outside experts are not so sanguine.
Former CIA and NSA Director Michael Hayden, who is advising Republican presidential candidate Jeb Bush, noted that there are three pathways to a nuclear weapon: fissile material, weaponization and a delivery system.
“We’re betting the farm that we can block and have knowledge of one critical path,” the fuel cycle, he said, noting that Iran is allowed to pursue ballistic missiles under the deal. “Which means that the margin for error in stopping them from having a usable nuclear weapon is more narrow than it otherwise would be.”
Albright, the former weapons inspector, said it will be hard for Iran to cheat on nuclear fuel during the first 10 years of the agreement, but it will become easier as restrictions are lifted on the scope of its civilian nuclear program.
Just this week, Albright’s group released satellite photos that he said raised questions about Iranian activity at a suspected military site, Parchin. The intelligence official said possible nuclear weapons work on the base is believed to have ended a decade ago, and any cleanup is long over.
History provides reasons to be skeptical of U.S. ability to detect and gauge secret Iranian nuclear activity.
Foremost among them are the massive misjudgments in intelligence that helped justify the Iraq war. Nearly every U.S. spy agency concluded with some level of certainty that Saddam Hussein possessed active chemical and biological weapons programs. They were flat wrong.
Officials point out that the Iraq war debacle led to changes. On Iran, for example, agencies brought in “red teams,” both from inside and outside to probe for weaknesses, question assumptions and ponder unlikely scenarios. The Iran analysis has withstood such probing, officials say.
Still, the American intelligence community has misjudged a number of major developments since then, including the Arab Spring, the Russian move into Ukraine and the swift military advance of the Islamic State.