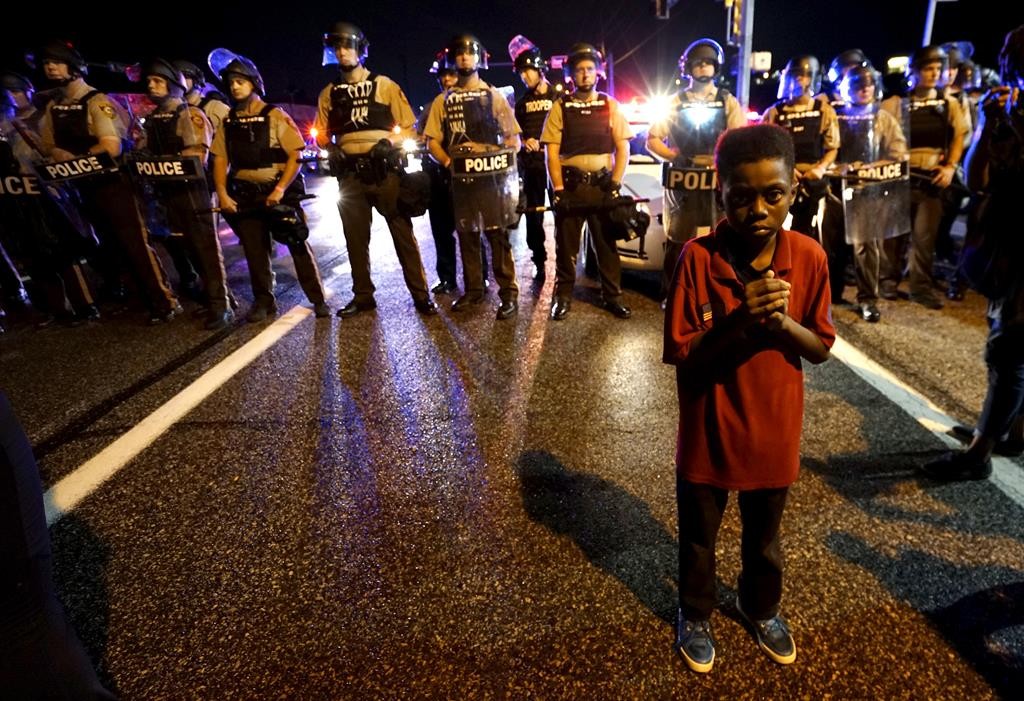 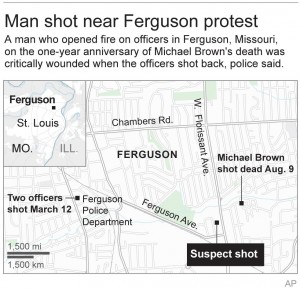 Ferguson was a community on edge again Monday, a day after a protest marking the anniversary of Michael Brown’s death was punctuated with gunshots and police critically wounded a black 18-year-old accused of opening fire on officers.

Police, protesters and people who live and work in the St. Louis suburb were bracing for the possibility of more violence along West Florissant Avenue, the same thoroughfare that was the site of massive protests and rioting after Brown was fatally shot last year in a confrontation with a white Ferguson officer.

“Of course I’m worried,” said Sandy Sansevere, a retired health care worker who volunteers at the retail store operated by the nonprofit group I Love Ferguson, which was formed after Brown’s death to promote the community. “What scares me are the guns.”

Protests spilled outside of Ferguson. About 50 protesters were arrested around midday Monday for blocking the entrance to the federal courthouse in downtown St. Louis. Among those arrested was scholar and civil rights activist Cornel West.

That protest, like other commemoration events over the past few days, was largely peaceful and somber. But on Sunday, several hundred people gathered in the street on West Florissant, ignoring an officer on a bullhorn repeatedly warning them to get to the sidewalk or face arrest. Eventually, a few lobbed glass bottles and rocks at officers.

As tensions escalated, several gunshots suddenly rang out from the area near a strip of stores, including some that had been looted moments earlier. Belmar believes the shots came from about six different shooters. The shooters included the suspect, identified by his father as 18-year-old Tyrone Harris Jr., whom police had been watching out of concern that he was armed, Belmar said.

During the gunfire, the suspect crossed the street and apparently spotted plainclothes officers arriving in an unmarked van with distinctive red and blue police lights, Belmar said. The suspect allegedly shot into the windshield of the van.

The four officers in the van fired back, then pursued the suspect on foot. The suspect again fired on the officers when he became trapped in a fenced-in area, the chief said, and all four opened fire.

Harris was in critical condition after surgery early Monday. Prosecutors announced 10 charges against him — five counts of armed criminal action, four counts of first-degree assault on a law enforcement officer and a firearms charge. All 10 are felonies.

Tyrone Harris Sr. told The Associated Press his son was a close friend of Michael Brown and was in Ferguson Sunday night to pay respects.