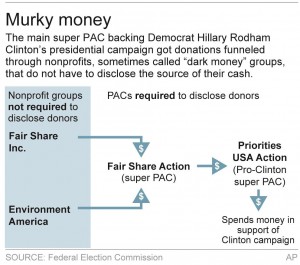 Hillary Clinton told a cheering crowd at her largest rally so far that “the endless flow of secret, unaccountable money” must be stopped. Two weeks later, the main super PAC backing her bid for the Democratic presidential nomination accepted a $1 million contribution that cannot be traced.

Those two groups are nonprofits that are not legally required to reveal information about their donors. Such contributions are sometimes called “dark money” by advocates for stricter campaign finance rules.

“This appears to be an out-and-out laundering operation designed to keep secret from the public the original source of the funds given to the super PAC, which is required to disclose its contributors,” said Fred Wertheimer, director of one such group, the Washington-based Democracy 21.

While another Democratic competitor, Vermont Sen. Bernie Sanders, has rejected the support of super PACs altogether, Clinton has been plain that she needs big-money help.

This article appeared in print on page 3 of the August 11th, 2015 edition of Hamodia.