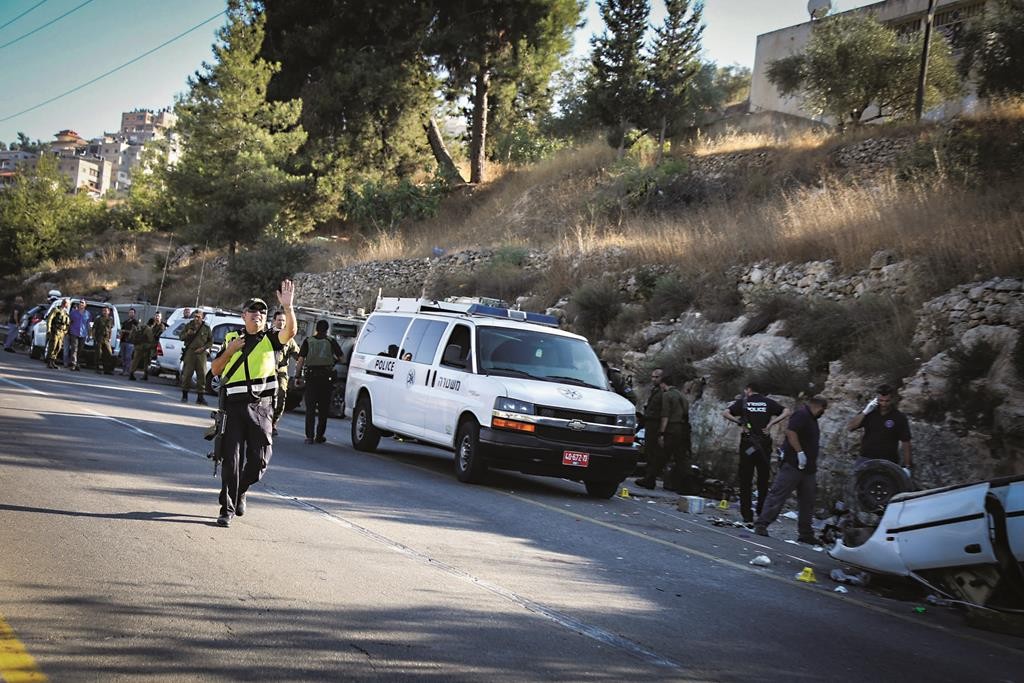 A Palestinian terrorist rammed his vehicle into three Israeli soldiers at a hitchhiking post near Shiloh in the Shomron on Route 60 on Thursday.

Two of the victims were seriously wounded in the head and chest and were evacuated from the scene, one by helicopter to Hadassah Ein Kerem Medical Center in Yerushalayim, the other by intensive care ambulance to Hadassah.

The third soldier, who sustained only light injuries, was treated at the scene. Both were reportedly sedated and on ventilators.

Other IDF soldiers who were nearby when the attack took place opened fire at the attacker’s vehicle, disabling it. The driver was trapped inside after it overturned, and IDF medics treated him there.

Prime Minister Binyamin Netanyahu commended the rapid response of the IDF and wished the injured a speedy recovery.

Again he called attention to the international community’s failure to condemn this attack and a firebombing of an Israeli vehicle in eastern Yerushalayim earlier in the week, in contrast to the international outrage at the arson attack on a Palestinian family last Friday.

This week, the United States and Europe were silent.

“I find it strange that those who were quick to condemn terrorism against Palestinians are silent when the terrorism is directed at Jews,” Netanyahu said.

In a similar vein, Agriculture Minister Uri Ariel (Jewish Home) said that while “us Jews” condemned the firebombing of Palestinians last week, he does not expect the Palestinian Authority to do the same following Thursday’s attack.

Ariel noted that “residents of Yehudah and Shomron deal with attacks and harassment every day that don’t reach the media” and called on Defense Minister Moshe Yaalon to upgrade the security at major intersections.

The opposition Zionist Camp also praised the IDF and criticized the government.

“It is up to the prime minister to restore security for every person in Israel. This is an extremely serious incident of criminal terrorism,”  the party said in a statement.

In a separate incident on Thursday afternoon, police closed off a central highway near Tel Aviv while they gave chase at high speed to a car driven by a suspected terrorist, Arutz Sheva reported. The vehicle had not heeded a police signal to stop.

The Ayalon Highway (Route 20) was closed to traffic northwards near the Shalom Interchange for about half an hour while the drama played out.

After police caught up with and stopped the vehicle, an investigation revealed no weapons or explosives.

The driver and two passengers were arrested and brought in for questioning.