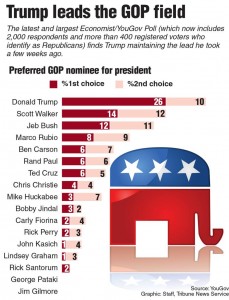 The Republican bid to reclaim the White House began in earnest Thursday with the first debate of the 2016 campaign, a 10-candidate face-off for leadership of a party grappling with internal divisions and a changing American electorate.

Taking center stage for the prime-time debate in Cleveland was Donald Trump, the billionaire businessman whose summer surge has upended the Republican field. With an unpredictable style and unformed policy positions, Trump is a perplexing foe for his GOP rivals.

Joining Trump on stage was a field of seasoned governors, rookie senators and a never-been-elected outsider.

As in the 2012 Republican primaries, the GOP faces a tug of war between those eager for a candidate with broad general election appeal and those who think the key to winning is nominating a fiery conservative.

“You’re starting off with a lot of candidates who have an initial group of support that reflects a particular element of the party, but nobody is close at this point to putting together a majority coalition,” said David Winston, a Republican pollster.

While 17 Republicans are seeking the party’s nomination, only 10 were invited by debate host Fox News to participate in the main event. The remaining seven were relegated to a pre-debate forum, including former Texas Gov. Rick Perry and businesswoman Carly Fiorina, the only woman in the GOP field.

While the candidates pitch their visions for the Republican Party’s future, they are also making the case that they would present the strongest general election challenge to Hillary Rodham Clinton, the front-runner for the Democratic nomination.

Clinton was scheduled to be traveling during the debate and didn’t plan to make a statement afterward. Her campaign preemptively made the case that there was little difference between Trump’s “outrageous” positions and the rest of the field.

“They all have an identical agenda,” said Joel Benenson, Clinton’s chief strategist.

This article appeared in print on page 1 of the August 7th, 2015 edition of Hamodia.