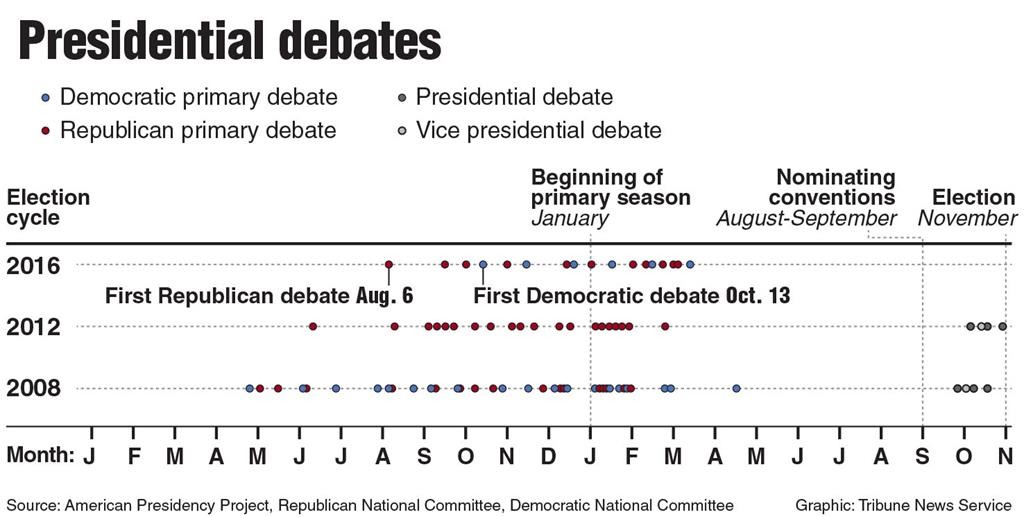 The Democratic National Committee unveiled plans on Thursday to hold six presidential debates starting this fall, with the first scheduled for Oct. 13 in Nevada.

With Republicans focusing on their first debate, Thursday night in Cleveland, Democrats released plans for a far-less-crowded schedule.

Vice President Joe Biden’s staff has been kept informed about the scheduling but has not committed to attending, according to Democrats involved with the process. They spoke on condition of anonymity because they were not authorized to publicly discuss private conversations.

Recent conversations between Biden associates and Democratic donors and operatives have led to speculation that Biden might challenge Clinton, though he has not announced a decision to his staff or said publicly whether he plans to run.

“There’s always room for the sitting vice president if he chooses to run,” said DNC chairwoman Rep. Debbie Wasserman Schultz. “In fact, there’s room for anyone at this point.”

Four debates are scheduled in early primary states before the Iowa caucuses on Feb. 1, a number considered too few by candidates challenging Clinton for the nomination. Dates for the final two gatherings, planned for Wisconsin and Miami, have not been set, but the committee said they will be held in February or March.

In addition to the October forum, debates will be held Nov. 14 in Des Moines, Iowa; Dec. 19 in Manchester, New Hampshire, and Jan. 17 in Charleston, South Carolina.

The debates, Wasserman Schultz said, will “give caucusgoers and primary voters ample opportunity to hear from our candidates about their vision for our country’s future.”

Both Sanders and O’Malley are pushing for more official forums to challenge Clinton, the front-runner. For O’Malley and Sanders, both of whom lag Clinton in fundraising and organization, debates could offer an opportunity to get national attention.

Unlike Republicans, who face criticism after allowing only 10 candidates onstage for Thursday’s prime-time debate, the Democratic forums will be far less crowded.

Clinton’s team said she is looking forward to participating.

“She prides herself in doing very well in debates,” said her chief strategist Joel Benenson. “It’s a good opportunity to get attention on issues that are front and center in the lives of Americans.”