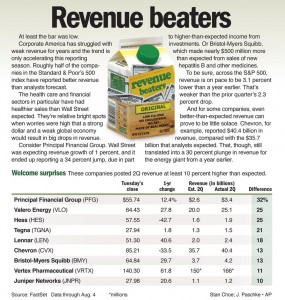 Stocks have been trading in a tight range for several weeks as investors wait to see if the economy strengthens sufficiently for the Federal Reserve to raise its benchmark interest rate for the first time in more than nine years. Investors shouldn’t make the mistake though of thinking that the market is in a summer slumber, said Kate Warne, an investment strategist at brokerage Edward Jones.

While energy stocks have plunged in response to falling oil prices, she noted, health care stocks are having another banner year.

“Stocks haven’t moved any place, but it’s because there’s been an equal mix of gainers and losers,” says Jones. “What we’re seeing is a back-and-forth market, not a doldrums market.”

Allstate was among the biggest decliners in the S&P 500. The insurer dropped $7.04, or 10 percent, to $62.34 after reporting earnings that fell significantly short of analysts’ expectations. The company said its earnings dropped because of more frequent and more severe auto accidents.

A slump in Apple’s stock also weighed on the market.

Apple dropped for a fifth straight day after falling below a closely followed level that traders use to gauge the momentum of a stock. The iPhone maker closed down $3.80 at $114.64 and has dropped 14 percent since closing at a record $133 on Feb. 23. That puts Apple in a correction, Wall Street parlance for price declines of 10 percent or more from a peak.

Almost 80 percent of the companies in the S&P 500 have now reported their second-quarter earnings, and average earnings for companies in the index are set to fall 0.2 percent. If earnings do end lower the quarter lower, once all companies have reported, it would be the first quarter in almost six years that corporations have failed to grow their profits.

Still, many analysts are predicting that earnings will recover in the second half of the year as the economy strengthens.

“This is an earnings stall, not an earnings decline,” said Jeremy Zirin, head of investment strategy at UBS Wealth Management.

In energy trading, the price of oil rose Tuesday, partially reversing Monday’s steep drop. U.S. crude rose 57 cents to close at $45.74 a barrel in New York, regaining some of the $1.95 it lost Monday. Brent crude, a benchmark for international oils used by many U.S. refineries, rose 47 cents to close at $49.99 in London.

Despite Tuesday’s rebound in oil prices it is likely still too early to consider investing in oil stocks, said Anastasia Amoroso, a global market strategist at JPMorgan Funds. That’s because they still haven’t been able to adjust to the sharp drop in oil prices that started about a year ago.

“As much as oil companies are attempting to cut costs, they cannot keep up with the drop in revenues,” said Amoroso. “For me, you need to see some further cost cutting by the energy companies.”

In bond trading, prices fell after the Wall Street Journal reported that Federal Reserve Bank of Atlanta Dennis Lockhart said in interview that the economy was ready for its first rate increase in more than nine years.

In other energy futures trading on the New York Mercantile Exchange: