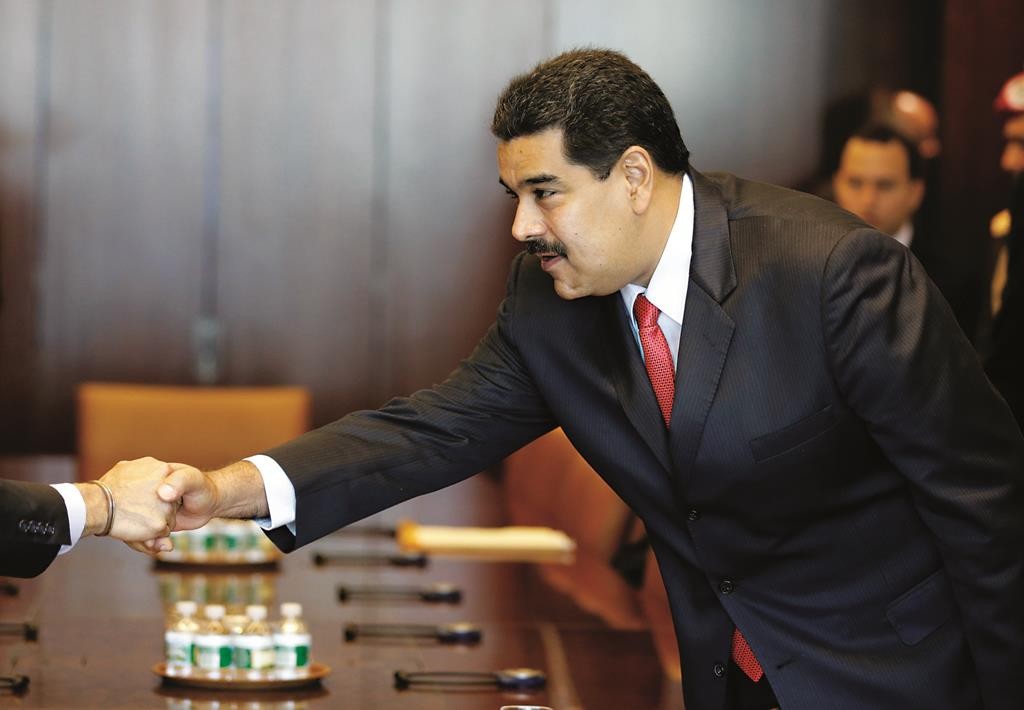 The Obama administration’s charm offensive with unfriendly states has rolled through Myanmar, Iran and Cuba. Next stop: Venezuela.

Just months after the administration declared Venezuela a threat to U.S. national security, it is working to improve relations, driven by concern that upheaval there could destabilize the region.

State Department officers have been meeting quietly with officials in the leftist government of President Nicolas Maduro since April to develop what Secretary of State John Kerry has called “a normal relationship.”

The outreach is another test of President Barack Obama’s 2009 inaugural pledge to “extend a hand” to repressive and corrupt regimes if they are “willing to unclench” their fists.

Falling oil prices, plummeting foreign reserves, a 68.5 percent inflation rate and growing political tensions are battering Venezuela. There’s enough at stake that even a Justice Department probe into the alleged drug ties of the lead Venezuelan in the talks hasn’t derailed the diplomacy.

“The U.S. has a broader goal here, no matter what they think about the Venezuelan government,” said Christopher Sabatini, a Latin American studies professor at Columbia University in New York. “The goal is to prevent a black hole that will suck in other Latin American economies.”

One frequent critic of the administration’s foreign policy has cautious praise for the effort. “I’m very glad the administration is trying to deal with them” on political repression and staging fair elections in December, said Sen. Bob Corker, the Tennessee Republican who heads the Senate Foreign Relations Committee.

Corker visited Caracas last month and returned dismayed by the sight of Venezuelans queuing outside stores in the early morning hoping that toilet paper might be in stock.

“I don’t think I’ve been to a place that has more potential but is totally blowing it,” Corker said in an interview. “It’s just sad.”

Beyond the hyperinflation that burdens ordinary people and erodes the government’s spending ability, the country’s international reserves fell to a 12-year record low of $15.37 billion on July 27, according to data compiled by Bloomberg. The country’s basket of crude oil and petroleum, a major source of national revenue, fell 4.2 percent last week to $45.87 per barrel, according to the Oil Ministry’s website. A year ago, a barrel of oil brought Venezuela about $96.

Venezuela and its state oil company have about $5 billion in bond payments due in the last three months of this year and about $10 billion in 2016, according to Bank of America Corp. estimates.

Harvard Professor Ricardo Hausmann is saying Venezuela will have no choice but to default on its debt next year amid shortages of staples such as medicine and milk.

“One of the fears is contagion,” said Carl Meacham, director of the Americas program at the Center for Strategic and International Studies in Washington. With the world’s largest proven oil reserves, Venezuela has wielded regional clout by offering neighbors cheap energy and subsidies.

Now, with the country becoming “more and more a hub for international drug cartels,” Meacham said the U.S. effort is about preventing it from becoming a failed narco state. “The spillover won’t just affect folks inside Venezuela, it also has the potential to affect countries all over the region,” he said.

There also are strategic considerations. The U.S. is Venezuela’s biggest trading partner, the country currently has a vote on the United Nations Security Council as one of 10 nonpermanent members, and it has allied itself with Cuba and other nations hostile to the U.S., sending oil to Syria’s regime despite sanctions in 2012 and last year agreeing to let Russia establish naval and military bases in its borders.

The U.S. “wants Venezuela to relax its international positions on countries like Iran, Russia, Syria and Greece,” said Carlos Romero, an international relations professor at the Central University of Venezuela.

There’s concern, too, that tensions with Venezuela could dampen efforts to improve relations with other Latin American nations.

Kerry said on July 20 that he and Cuba’s foreign minister had discussed the U.S.-Venezuela relationship, and “our hope is that we can find a better way forward because all of the region will benefit.”

In the past two years, both nations have expelled diplomats from the other country, and the U.S. has sanctioned Venezuelan officials for human rights abuses.

Maduro, who embraces the socialist rhetoric of his late predecessor Hugo Chavez, called the sanctions the “most aggressive, unjust and disgraceful” action ever taken against Venezuela.

Maduro’s government is eager to reach some sort of “modus vivendi” with the U.S., Romero of Venezuela’s Central University said. The precarious economy, coupled with the sight of other Latin American countries – particularly Cuba – warming to the U.S., was a spur for Maduro.

Maduro publicly voiced optimism for U.S.-Venezuela relations after speaking with Obama at the Summit of the Americas in Panama in April, an event where Obama and Cuban leader Raul Castro shook hands as their countries moved toward normalization.

“There’s a real sense the U.S.-Latin American relationship had been a bit distant and now has new possibilities,” said Harold Trinkunas, director of the Latin America Initiative at the Brookings Institution. “The one thing that could spoil that is the situation in Venezuela, so the administration is looking for ways to manage that.”

So far, the talks have focused on regional issues such as the peace process in neighboring Columbia and Haiti’s elections, and on domestic issues such as jailed opposition leaders and the need to hold credible elections in December with international observers, according to a State Department official who spoke on condition of anonymity.