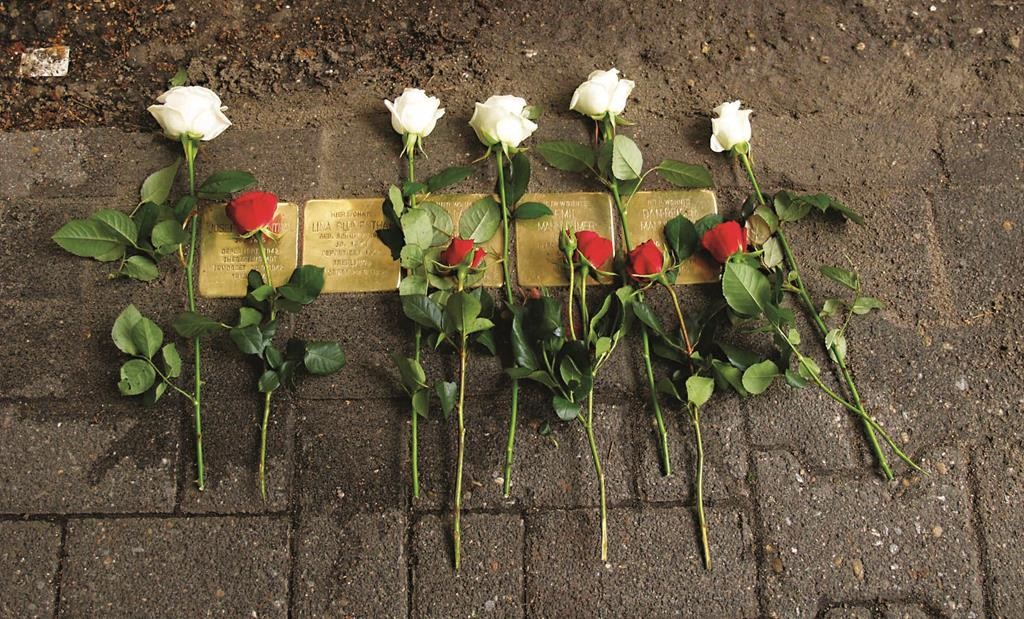 Munich’s city council voted down a proposal to lift a ban on so-called “stolpersteine,” stumbling stones, tiny plaques embedded in sidewalks to memorialize individual Holocaust victims outside their former homes. The decision sparked a wide discussion, particularly in Germany, where the stones are a common sight.

The opposition Green party and a smaller group on the council had sought to clear the way for the stones carrying Holocaust victims’ names to be laid, something that councilors first rejected in 2004.

However, last week Wednesday, the majority of councilors voted against laying the stones. Opponents of the stones — who include Jewish leaders in Munich — object to them on the grounds that they allow victims’ names to be trampled on.

“Should neo-Nazis be able to wipe the dirt from their combat boots on the stones?” asked Marian Offman, a member of the city council and the board of the Jewish Cultural Center of Munich and Upper Bavaria, during the debate, reported Deutche Welle.

Charlotte Knobloch, a key leader in Munich and in German Jewish institutional life, said she found it “unbearable” that people would be “stepping all over” the names of murdered Jews, although she said the project was “well meant” and she could understand those who were of a different opinion. Mrs. Knobloch is a past president of the central governing body of Jews in Germany and is herself a Holocaust survivor.

“When my family discovered the stone that was placed in our grandmother’s memory by the person who lived on the same street that she once did, we were very moved by it,” said a Lakewood resident who asked not to be named. “For her and millions of others that were murdered in the camps, this is the closest thing they will ever have to a matzeivah. It is obviously not where they are buried, but is at their place of residence, which is meaningful, and it is individualized, unlike most memorials.”

He said that the stone had been sponsored by a non-Jew who lived across the street from his great-grandmother’s former residence and that the family only found out about the memorial years after it was laid.

While he said that he did understand the feelings of objectors, the Lakewood resident responded, “Unfortunately, many Jewish cemeteries in Europe are also trampled, neglected, and targeted; does that mean that they do not have value?”

Stolpersteine are the brainchild of Gunter Demnig, a German artist, recognizable by his signature cowboy attire. In the early 1990s, against the backdrop of an increasing number of large Holocaust memorials, he sought a method that would focus on individual victims. The small brass plaques, imbedded in a stone, bear the name, birthdate and fate of the person to whom they are dedicated. Some are dedicated to survivors who were forced to flee, but most end with the date and location of their deaths, usually a Nazi camp. They are privately sponsored and cost 190 Euros each. Several organizations and individuals conduct research, usually based on Nazi-era records, to determine the needed information.

“We are very disappointed [about Munich’s decision],” Abraham Leher, vice-president of the Federation for Jews in Germany, told Hamodia. “Munich is an exception; all other major cities in Germany have them and here in Cologne we have had a very positive experience with them.  I go through the middle of town and see people stopping and reading them. It starts conversations about the victims; it’s a valuable way of remembering the Holocaust.”

The project has attracted controversy. Some locations such as Munich saw the memorials as disrespectful, but they have gradually spread.

According to the Stolpersteine organization, 48,000 have been installed in over 1,000 cities and towns throughout Germany, as well as in 17 other European countries including Austria, France, Hungary, Netherlands, Poland, Italy, Norway, and Russia.

“I find it a very powerful memorial. It gives a name to the victim. We say the number six million, but it’s really six million individuals,” Rabbi Joshua Spinner, vice president and CEO of the Berlin-based Ronald Lauder Foundation, told Hamodia. “Even if you can’t stop and read each of them, they make you conscious that someone lived where you live, walked where you walked, and they were taken away. It’s a very elegant and personal way of giving names back to … individual[s] and weaves their memory into the public space.”

Dr. Josef Schuster, President of the Federation for Jews in Germany told an interviewer when asked about Munich’s decision that while he personally sees great value in stolpersteine, still, “there cannot be an exclusive claim” on how to remember victims and that it was up to Munich to decide how to do so.

Elisabeth Lutz-Kopp, of the Museum Spiegelgasse for German-Jewish history in Wiesbaden, who has been heavily involved in research for stolpersteine in her city, told Hamodia that while feedback for the stones has been overwhelmingly positive, objections have been encountered.

“The owners [of houses where victims once lived] express fear that people would suspect that they got their houses as some illegal benefit of Nazi laws,” she said.

Other common complaints included making homes stick out as targets for anti-Semitic attacks or fears of loss in property value.

As for Munich’s decision, Mrs. Lutz-Kopp said that she felt it was mostly attributable to Mrs. Knobloch’s feelings on the matter and the influence that she holds in the city. She added that in her experience, most passers-by instinctively avoid stepping on the small monuments and that changing public opinion might eventually push Munich to reverse its decision.

“I pass many stumbling stones going along the street where I live, and I know all the names. I kind of greet them as former neighbors that I would have known,” said Mrs. Lutz-Kopp. “Demnig’s project brings the victims of the Nazi terror back into the neighborhood where they used to live before they were taken away and murdered.”