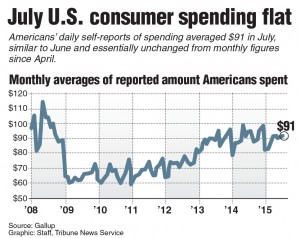 Growth in spending by consumers significantly cooled in June despite another solid gain in incomes, the Commerce Department said Monday.

Personal consumption expenditures increased 0.2 percent, the smallest in four months, compared to a downwardly revised 0.7 percent jump in May.

The decline came as Americans spent less on cars and other long-lasting durable goods.

Personal income rose 0.4 percent for the third straight month. But instead of spending the extra money, as they did in May, consumers saved much of it.

The portion of disposable income saved rose to 4.8 percent in June, compared to 4.6 percent the previous month.

Economists had expected spending to decline. The increase in personal income was better than the 0.3 percent increase analysts had forecast.

Excluding volatile energy and food prices, so-called core inflation increased 1.3 percent for the 12 months ended June 30. That annual rate has been the same since January.

Federal Reserve policymakers are watching spending and income figures closely as they try to decide when to raise the short-term federal funds rate.

On Friday, the Labor Department reported that the broad look at worker pay, the employment cost index, rose just 0.2 percent in the second quarter. That was down from a 0.7 percent increase in the first quarter and the smallest rise since the government began collecting the data in 1982.