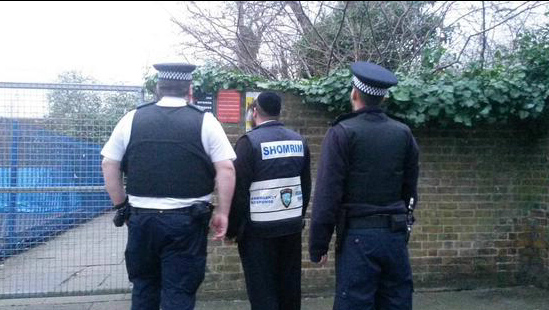 The number of recorded anti-Semitic incidents in Britain soared in the first six months of this year compared with 2014, probably due to a surge in reporting, said a report by a Jewish communal body on Thursday.

There were 473 recorded incidents between January and June  of this year, including two classified as “extreme violence,” said the Community Security Trust (CST), which advises Britain’s estimated 260,000 Jews on security.

That represented a 53 percent rise over the same period last year, said the CST, which has recorded anti-Semitic incidents since 1984.

“There definitely has been an increase but it is mostly because people are reporting much more and not that [there are] so many more [cases],” Chaim Hochhauser of London Shomrim told Hamodia.

Mr. Hochhauser said that the increase in recorded incidents is mostly a result of Shomrim’s campaign to raise awareness of the importance of reporting such events.

“We [Shomrim] saw what has been happening around the world and put ads everywhere encouraging people to report every little incident,” he said.

The incidents that Shomrim have addressed recently mostly consisted of verbal abuse, often using Nazi-era slogans, and acts of vandalism such as tire slashing and graffiti. The most common perpetrators were Eastern European immigrants and Muslims.

Hochhauser said that authorities were responding appropriately and that the unfortunate trend was being treated “very seriously” by police. He added that there was significant increase in security at Jewish institutions, especially schools.

Across Europe, Jews have warned of a growing undercurrent of anti-Semitism, which was fanned by protests against Israel’s Gaza War last summer. Some protests, mostly attended by Muslims, ended in violence against Jewish targets.

Those fears were exacerbated in January when an Islamist gunman killed four people in the Hyper Cacher kosher supermarket in Paris, followed a month later by an attack on Copenhagen’s main synagogue.

“The terrorist attacks on European Jews earlier this year, following the high levels of anti-Semitism in 2014, were a difficult and unsettling experience for our Jewish community,” said CST Chief Executive David Delew.

“We welcome the apparent increase in reporting of anti-Semitic incidents but regret the concern and anxiety about anti-Semitism that this reflects.”

“I know that many Jewish people in this country are concerned about safety in their community, and we are listening,” said Home Secretary (interior minister) Theresa May.

Members of the UK’s Jewish community said that the increase had not had a major impact on daily life.

“I personally do not see it; there has been some increase, but nobody is moving, people have just been a bit more careful and more aware of security,” Rabbi Avraham Pinter, the director of Yesodei HaTorah institutions in London, told Hamodia. “I think that what I and most frum people are far more concerned about is the increasingly unsympathetic attitude towards religion in general.”

Rabbi Pinter said that measures to change the curriculums of Torah mosdos as well as a recent effort  by the government to use tax laws as a means of discouraging large families posed more of a threat to Jewish life than the reported increase in anti-Semitic attacks.

“These measures are not anti-Semitic, they are more a result of increasing secularism, but their effects have been a cause of far more [concern] to us.”

(With reporting from Reuters)